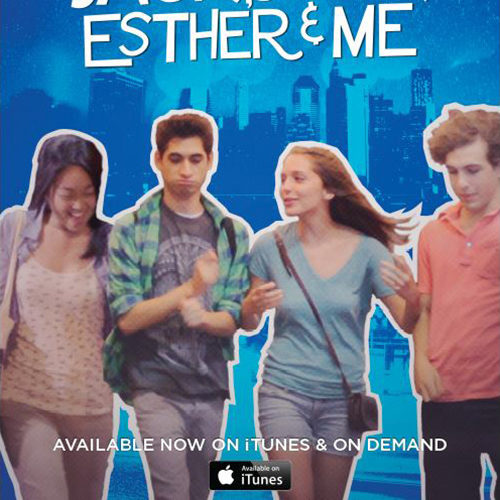 I was about twenty minutes into Jack, Jules, Esther & Me when worry struck. Centered around two best friends from disparate neighborhoods/social classes in New York City, Luis (Alexander Flores) and Jack (Aaron Sauter) are introduced putting the final touches on a plan for the former to win the heart of his crush (Jessica Rothe’s Jules) before everyone goes their separate ways to college. Hinging on their buddies staging a mugging so Luis could look the hero, it was absurd, clichéd, and destined for trouble. And if writer/director Daniel Poliner stuck to convention by making the entire story about this one adventure’s success, failure would have been his only option. So, when the big moment arrives less than halfway through, I breathed a sigh of relief that there may be more coming after all. Rather than your run-of-the-mill high school comedy/romance with the odd couple pairing of a hardworking smart kid (Luis) and the silver spoon oaf whose parents bought him into Princeton (Jack) having one last bender before summer ends, Poliner uses these stereotypical characters to construct a touching look inside a very emotional period universally ushered in by irreversible change. Before Facebook and other social media outlets, high school graduates probably had a less than 50/50 shot at staying close to those they were inseparable with before the chapter turned on their journey towards adulthood and even now it’s often just an impersonal electronic hello when boredom strikes and school work dissipates. So while Luis and Jack appear solid, the same wealth of insecurities, fears, and regret we’ve all felt during such transition slowly bubbles beneath their surfaces too.

Add on the unknown history between Jack and Jules that Luis doesn’t yet know about, the not so serendipitous inclusion of fourth wheel Esther (Alice Lee), and the immigrant mentality inherent to being a kid whose parents sacrificed everything to give the opportunities they never had and this film eventually shows its true colors and complexity once the nervous, awkward banter ceases and feelings are laid out in the open. The weird moments meant for comic relief like Jack’s maid being rendered incapacitated after unwittingly sneaking all of his chocolate-covered shrooms that only find themselves unnecessarily padding the runtime disappear around the mid-way point so the sorely missing teenage authenticity can take its place in Act Two. It’s here where relationships are tested and the reality of what they’re each about to face alone sinks in. The immaturity of periphery teens melts away to focus solely on this main quartet as life gets in the way of their plans. Whether bro-code transgressions between Luis and Jack, Esther’s guilt in going away to college meaning her Korean parents get left behind, or Jules’ desire to rediscover a human connection missing since breaking up with her ex, answers are available if they’re willing to seek them out. A kindred spirit rises above selfishness to open their eyes to the similarities they’ve been blind to and their importance to one another. We see their faults and their want to overcome them despite feeling as though the world has already come to its decision. They only need to achieve the chance for rebirth from those they love before entering the future with a clean slate.

So we get the fun moments where all four come together with wine and games as well as the quieter, more introspective ones where they pair off to lessen the embarrassment of speaking the truths they’d much rather keep buried deep down inside. They each grow as people too—something that having a new beginning to stare back at you can cultivate when you know the past is about to be left behind forever. Poliner wants to make us laugh, but his desire for us to understand and relate to these teens as human beings with real issues is the main goal. Redemption isn’t just an empty concept to be thrown about so the humor won’t appear overly amoral or mean; his characters have been written to help each other find it in a way that gives you hope they’ll hang tight. Its motives are true and its execution admirable and Jack, Jules, Esther & Me wears its indie aesthetic as a badge of honor, letting its actors work through their roles and come into their own by the end with poignant emotion and honesty. It does feel long in parts with possible redundancies in its lack of subtlety to ensure we get the point, but that’s something a first-time feature-length writer/director will overcome with practice and experience. Montages with changing screen quadrants and box wipes are superfluous and look too much like the Powerpoint presentation Luis gives at the start when the cross-cutting of conversations later on works much better at conveying the passing of time. Poliner really hits his stride when simplifying and letting his work speak without gimmick.

As for the actors, each lead is a bit of an up-and-comer whether in movies, television, or theatre with Alice Lee coming from “Spring Awakening” and “Spider-Man: Turn Off the Dark” on Broadway. They all have their regressions into “acting” but for the most part give natural performances when caught in the moment. Flores is an endearing “good guy” and Sauter a sympathetic screw-up who both work best when engaged in real-life notions beyond the fabricated silliness of perfect plans; Rothe is a complex pretty face who shines when the futility of sadness hits and Lee a welcome blend of shy guilt and surprising rebellion. Their characters—like the film—aren’t perfect, but each has the capacity to own these imperfections when left emotionally naked onscreen as rocky starts make way towards the promise of a vibrant future.