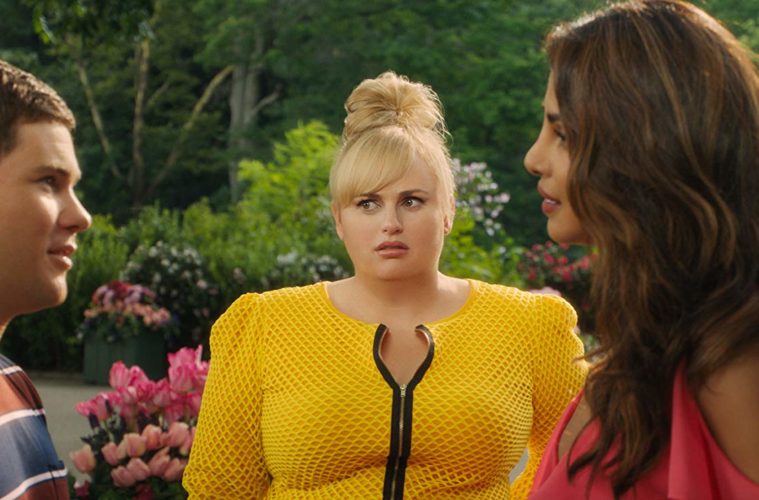 Review: ‘Isn’t It Romantic’ is a Bad Rom-Com Partly Redeemed by Rebel Wilson

By design, there’s a very bad romantic comedy at the center of Isn’t It Romantic. Unfortunately, a one-note romantic comedy with all the tropes isn’t exactly the best way to parody the genre, even if it’s wrapped in an empowering story that tackles the gender problems at the core of heteronormative rom-coms. No stranger to meta films, The Final Girls director Todd Strauss-Schulson knows what notes to play all too well, headlined by the very game and often funny Rebel Wilson as Natalie, an Australian parking garage architect who lives in a very real New York City. Ultimately, Isn’t It Romantic’s flaw is that it plays it too safe.

The real New York of small apartments, crowded streets, and rude people is well-rendered in hand-held shots and grim colors as Natalie navigates life, under-appreciated by coworkers and her neighbor. After a robbery on the subway goes terribly wrong she wakes up with a concussion in a fantasy land of floral magic–it’s almost as if she (and the viewed) have over-dosed on those lovely pastel cupcakes from Magnolia Bakery.

The problem is the movie doesn’t do much when it shifts into this mode, playing by the rules even as Wilson’s Natalie objects. Everyone in this new reality is pretty from client/love interest/fellow Aussie Blake (Liam Hemsworth), her uber rich client in the real world), to her coworkers Josh (Adam DeVine, in a Pitch Perfect reunion) and Whitney (Betty Gilpin). When Josh bumps into a real fantasy girl–swimsuit model-turned-yoga ambassador Isabella (Priyanka Chopra)–they have a quick courtship that’s something out of a 40s B-movie comedy.

I suppose the point is nuance doesn’t exist but nuance can be a great opportunity for comedy, and without it the film flies dangerously close to the witless gags of Jason Friedberg and Aaron Seltzer’s unwatchable “parodies” that essentially think they’re funny for simply recycling parts of popular flicks. The PG-13 romantic comedy world is so generic it’s hard to pinpoint, apart from a few lines which films they’re parodying. David Wain’s They Came Together, for the record, is a much funnier send-up of New York set romcoms.

Isn’t It Romantic takes a middle ground that doesn’t always work in its favor. It seems to overstay its welcome despite a runtime that’s under an hour and a half as it hits us over the head with too much escapism. Much of the heavy lifting is placed on Wilson, in her first leading role and she deserves better than a script that plays it way too safe.

A PG-13 comedy wrapped within a PG-13 romantic comedy, it’s not a particularly clever meta-commentary on the various tropes of the genre as Natalie doesn’t quite know what to make of her new apartment, lifestyle, Gay Best Friend Donnie (Brandon Scott Jones), as well as the fact Whitney has now become her rival in this alternative universe. Isn’t It Romantic misses several opportunities to find humor in its absurdity with low stakes, too little of a comic payoff, and only a few cursory observations about gender roles and norms in these universes.

Isn’t It Romantic is now in wide release.