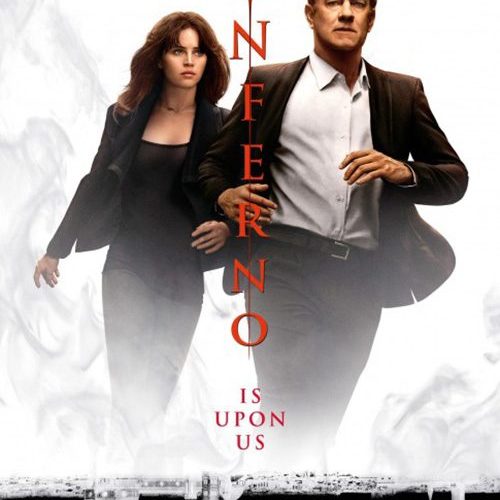 It’s appropriate that the act of illusion plays such a central role in Inferno, for the film itself spends a lot of time masquerading as though it’s something loftier than a schlocky B-movie thriller. It’s the third in the Tom Hanks-starring, Ron Howard-directed series based on the Robert Langdon novels written by Dan Brown. The first two — The Da Vinci Code and Angels & Demons — left much to be desired. This one emerges as a marked improvement, though that’s not saying a whole lot.

Simply put, it’s the lightest and shortest of the bunch. Inferno moves at a brisk pace, thanks in no small part to a story device that has Langdon (Hanks) literally learning what’s going on while the audience does. Awoken by young doctor Sienna Brooks (Felicity Jones) in Florence, Italy, the esteemed “symbologist” finds himself in a hospital with a severe head wound and no recollection of the last 48 hours. In no time, people are trying to kill him as he and the doctor attempt to solve a puzzle hidden inside a biotube that everybody’s after. The mystery concerns Italian poet Dante Alighieri, his epic Divine Comedy, and the poem’s depiction of hell.

Conveniences and twists abound as our heroes trek across Europe in order to prevent a deadly virus, a proclaimed cure for overpopulation, from being unleashed upon the world. It’s been created by eccentric billionaire Bertrand Zobrist (Ben Foster), who proclaims, “Mankind is the cancer in its own body.” This is as provocative as his ultimate plan is ridiculous.

Do not forget that nothing is quite as it seems, this explained cheekily by Harry Sims (Irrfan Khan), who is, without question, the highlight of the picture. Often serving as the exposition machine at points throughout, Sims’ explanations remain general and almost sardonic in their delivery. What of the actions and motivations that have allowed this virus to emerge? “The usual shit,” Sims replies in one scene. How about the lack of morality he exudes? A certain fluidity is required in his particular work, he admits. Khan is joyful playing up his character’s ambivalence, a master manipulator whose own power moves, once revealed, beg the question: why wasn’t he the lead here?

Of course, the answer is that his last name isn’t Langdon — or Hanks, for that matter. To that end, it is quite interesting how crucial a role nearly everyone plays in the narrative. Jones chews some scenery as Brooks, constantly one step ahead of the discombobulated Langdon, while Sidse Babett Knudsen plays Elizabeth Sinskey, general director of the World Health Organization (WHO) and resident “one that got away” for Langdon. Omar Sy‘s in there, too, as a fellow WHO agent with some wily motivations.

When screenwriter David Koepp isn’t chained to the silly, Dante-related discoveries forcing the film forward, there’s fun to be had. Khan’s natural comic relief, Hanks and Jones’ general likability, and some clever story beats (particularly a moment where Langdon learns of a crime he committed while in the room with the people he committed the crime against) make Inferno a welcome-enough piece of fall entertainment. To be sure, it’s a thin recommendation, but a recommendation nonetheless.