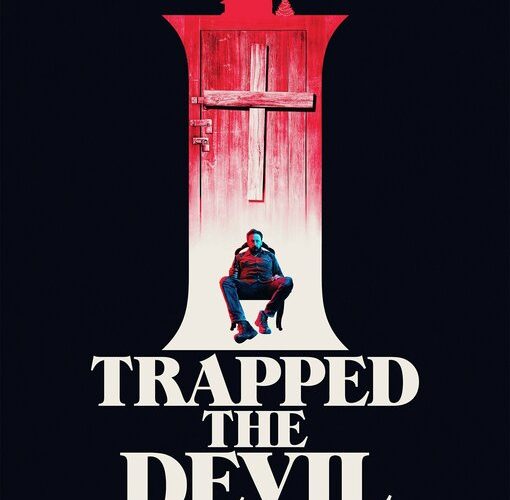 Review: ‘I Trapped the Devil’ Revels in Sinister Yuletide Horror

Tragedy struck some time ago and we honestly don’t need to know the details to understand how it’s affected the three characters we’re about to meet. Steve (Scott Poythress) is the one who’s hurting from it and has been ever since. Maybe his brother Matt (AJ Bowen) thought space was needed for him to heal or maybe he was just too unsure about what he could do to help alleviate his pain and/or scared about what doing so entailed, but it’s been awhile since they’ve last seen each other. This is why Matt’s wife Karen (Susan Burke) has dragged him out during Christmas to make certain her brother-in-law wouldn’t be alone. With Steve proving less surprised than inconvenienced upon their impromptu arrival, the gesture might be too late.

Or maybe it’s just in time since writer/director Josh Lobo’s I Trapped the Devil reveals Steve has done exactly that: trapped the Devil. That’s what he believes anyway. That’s what has him on-edge about uninvited houseguests considering he can’t risk letting his captive escape if they were to call the police. Because that’s what sane people do when told the family member they’ve worried might be unhinged has locked a strange man in his basement. They look at him with sad eyes, apologize for not being emotionally available to lean on when he needed it the most, and pick up the phone to prevent things from escalating further than they already have. The situation’s only positive is that him being locked away means Steve can’t hurt him more.

Could you do it, though? Could you volunteer your loved one to the cops or would you try figuring out a way to diffuse the situation first? If the man in the basement does just want to go home, maybe Matt can talk Steve down from his psychosis and make assurances that would benefit all involved. Then Steve could be committed somewhere to get the necessary help being thrown in jail would postpone. It’s a nice thought amplified by the guilt Matt feels for not having come by sooner to know his brother had unraveled so completely, but nice thoughts are rarely sound conclusions. So while the men go into the attic to see the work of a mad man, Karen goes down to free his unfortunate victim.

This is when a messed up scenario grows sinister in ways that force us to start wondering if Steve has been telling the truth all along. Not because his talk of evil existing beyond humanity’s own justifiable sins proves the Devil exists, but because the basement man’s pleas turn to growls of delight. Perhaps stress and fatigue is weighing everyone down so they (and we) hear voices that aren’t there. Or maybe Lobo is working towards some grand reveal that explains how Matt and Karen’s guilt goes beyond absence and into the tragedy itself. Either way, we have to worry on two fronts now. We can neither trust Steve nor this unseen prisoner because who’s to say the impossible explanation behind their convergence here isn’t somehow real?

It’s a gradual descent into fear as Lobo plants the seeds of paranoia from the start with static television screens forming silhouettes of unknown people and periodic phone calls causing their recipient to breakdown into silent screams. The dread becomes so palpable that the implausibility of a wooden door with three tiny locks somehow containing the Devil actually proves itself scarier as a result. Some will surely dismiss it as evidence that Steve has done little more than kidnap an innocent man, but even those naysayers can’t deny an alternative thought along the lines of the Devil choosing to stay. What’s more believable anyway? That a man could capture Satan or that Satan would allow himself to be captured so as to manipulate those trapped inside with him?

So we watch Matt and Karen struggle to get a grip on the situation while Steve wrests away control to ensure his precious cargo isn’t released back into the world. At one point a red light takes hold to catch everyone in a nightmarish moment of fantasy or memory with a wailing woman (Jocelin Donahue) lamenting how none of this is real. But does she mean the Devil, the idea of love, or the flimsy excuse that evil is anything more than our own burden to carry? The film opens with two police officers breaking in before rewinding to Matt and Karen’s arrival, so we’re perpetually asked to wonder what it is they’ll find. Because even if it’s a murder suicide, what evidence would guarantee Satan wasn’t involved?

The answer being unequivocally “none” means I Trapped the Devil should never be taken at face value because everything can be explained away as delusion or supernatural depending on what you want to believe. That the events on-screen exist in both modes of thinking only shows how the more horrific explanation is often the one where demons and ghouls are erased. Do you want to give mankind the excuse of somehow acting outside itself during its most heinous actions or will you place the mirror up to expose the truth of its own intent? Who then would we see upon opening that door? Would it be a cloven-hoofed demon, a stranger with ill intent, or us looking back? You cannot stop that which is already part of you.

I Trapped the Devil opens in limited release and hits VOD on April 26.