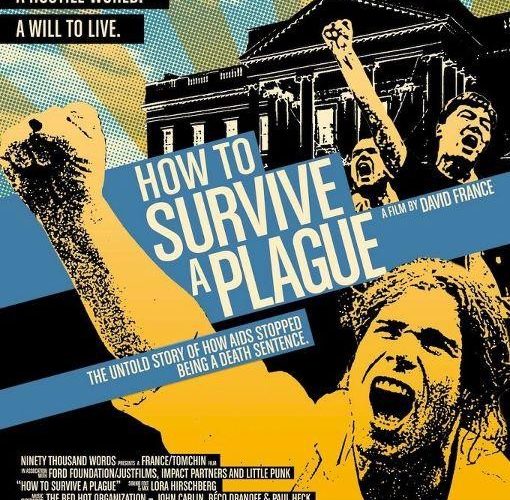 [Review] How to Survive a Plague

The war against AIDS was fought and won by those dying on the frontlines in Greenwich Village, New York City who could no longer accept a country’s willingness to persecute, abuse, and for all intents and purposes kill in an exercise of mass genocide brought on by fear. Retreating to God and the church’s ancient and skewed perspective on morality, America was ready to turn their heads and watch as millions died without a shred of guilt impeding that night’s sleep. Thinking the gay and lesbian population deserved it or that they should just “change their behavior” as President George Bush stated during a re-election debate, a nation built on freedom quickly ran to sign the death warrants of men and women it shortsightedly deemed unworthy of their pursuit towards happiness. An epidemic treated by the Roman Catholic Church as a cleansing of lost, depraved souls, AIDS was first labeled by the acronym GRID (Gay Related Immunodeficiency Disease) before spreading to hemophiliacs, IV drug users, and blood transfusion recipients. The public made its opinions early and wasn’t going to actively seek the sort of education necessary to come to its senses. This mindset paired with a staunchly Republican government sadly infusing too much religious doctrine into its secular occupation only exacerbated the situation and proved it was up to those with AIDS to find their own cure. David France‘s amazing portrait of the human spirit How to Survive a Plague looks to ensure that the legacy of these activists never fades from our consciousness. Lawyers, bond traders, actors, and playwrights alike, these regular, hard-working citizens became heroes.

Culled from over seven hundred hours of footage shot by the camcorders of over thirty people caught inside the action, France spent three years identifying participants, finding them or their families, and gaining access to their priceless wealth of information. As stated in the press notes for the film, the coinciding of this technology’s genesis with the virus’s first documented records couldn’t have been more serendipitous. Not only does it provide the means for France to tell the story of ACT UP (AIDS Coalition to Unleash Power) and its offshoot TAG (Treatment Action Group) today, but it also allowed those fighting to have a voice, spread the word, and fearlessly protest non-violently by putting cameras in the faces of those tasked to shut them down. This is one of the most crucial decades in our nation’s history shown as it unfolds. Focusing on a few of the more vocal ACT UP members, How to Survive a Plague becomes more than just a title. What started as an angry bunch of twentysomethings no longer able to sit back and watch each other perish evolves into an educated group of first responders drawing up legislation and game plans for drug trials as they reconcile the fact they will most likely not be around at the end. An impassioned speech by playwright Larry Kramer mobilized them; the unwaveringly assertive verbal punch of Bob Rafsky gave them a voice; the combination of intelligence, action, and compassion of Peter Staley gave them a face; and the countless others not limited to Mark Harrington, Spencer Cox, David Barr, Garance Franke-Ruta, and Gregg Gonsalves found the fortitude, faith, and power to never retreat.

We’re shown the war and its generals as they gain confidence, awareness, and success. Rage will never be the driving force for change and ACT UP knew this. Taking the volunteered insight of former drug chemist Iris Long, Harrington and others became educated in the science so they could stand before the NIH and the FDA with more than empty pleas. They came with ideas and the kind of discourse that would change the face of how companies like Merck tested and rolled out new medications. They came with the tools necessary to not be dismissed or marginalized. As is stated often throughout the film, neither the US government nor the drug companies gave the AIDS virus a cure. Those infected did it for themselves and this fact will now never be forgotten. An unparalleled document, we’re allowed an inside look at the City Hall protest that started it all; the ingenious St. Vincent Hospital “kiss-in”; meetings ending in both failure and success; ACT UP’s stunt to cover Senator Jesse Helms’ house with a giant condom; and the powerful AIDS quilt companion piece wherein friends and families of the dead marched to the White House to spread cremated remains onto the lawn. We watch the divide that occurred once the more politically activated members begin seeing Staley and the rest as too close to the “enemy” and how Merck R&D doctor Emilio Emini proved outsiders could be just as committed to the fight. We even watch as AZT, DDI, and other supposed miracle drugs are disproved, dealing the kind of blow make all involved rethink ideologies and tactics.

But above all the behind the scenes footage, archival television appearances, and deflating graphic showcasing the mounting death toll as each year passes, what sticks with you are the tears of pain and joy on those who literally battled for survival. As Staley and Harrington absorb into the business side of things, men like Rafksy stay forever on the emotional fringe. Shown in home videos playing with his daughter as each birthday passes to leave him frailer, Bob becomes our human connection to the statistics. His eulogizing and actions will bring you to tears as they do the war’s survivors revealed present-day at the end. With over eight million gone by 1995 and two million still dying each year due to an inability to pay for medication, it’s impossible to fathom what the numbers would have been without them.

How to Survive a Plague is now open in select cities.