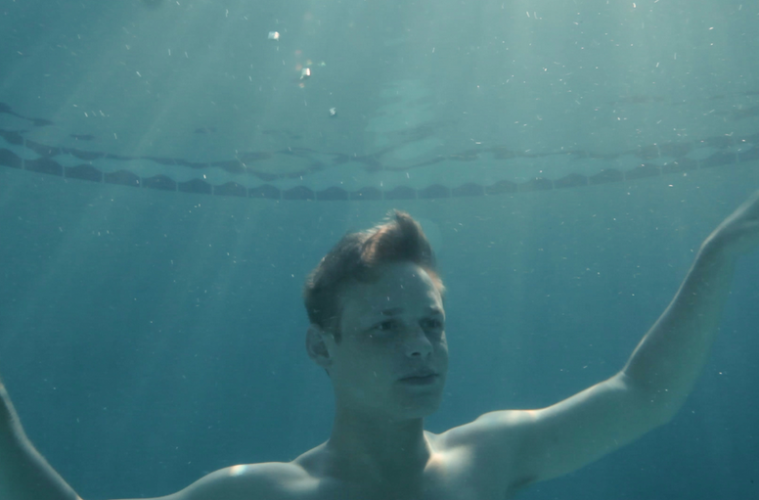 Based on his resume, filmmaker Stephen Cone displays a penchant for juxtaposing Christianity with the fast progressing modern world – he wrote The Wise Kids, a coming-of-age story set in a Southern Baptist church, and last year, he directed This Afternoon, a film about a seminary student dealing with sex addiction. His latest film, Henry Gamble’s Birthday Party, continues this fascination as it focuses on an evangelical family during a day-long celebration.

An in-ground pool serves as the stage for this drama centered around the closeted title character (played by newcomer Cole Doman). As he, his preacher father, Bob (Pat Healy), his disarmingly beautiful mother, Kat (Elizabeth Laidlaw), and his college freshman sister, Autumn (Nina Ganet), prepare for his seventeenth birthday party, they comprise a truly loving family built on affection, patience, and deeply held beliefs – even after a mid-morning masturbation session with his friend, Henry still can’t help but whisper a quick prayer. As the guests arrive, and tensions begin to arise, it becomes clear that Henry isn’t the only one keeping a secret from those closest to him.

With all the pieces in place for a true melodrama, it’s evident that Cone – who both wrote and directed the indie – wanted to create a more grounded experience, an effect he achieves for the most part. As the large cast of characters hang out in or around the water, conflict emerges through quiet conversations and moments captured with deft editing. Through somewhat privileged information, it’s revealed that Henry’s relationship with the outwardly gay Logan (Daniel Kyri) has become complicated, that the adults are still mourning a recently deceased church member, and the visibly distracted Kat has more on her mind than preparing food and cutting birthday cake. And then there’s Ricky (Patrick Andrews), an emotionally fragile member of the congregation whose appearance elicits murmurs about his recent suicide attempt.

The film strives to build complex characters by neither villainizing or idealizing them – even Henry, who worries his homosexuality will become evident in his presence, gives Logan the cold shoulder. Always the consummate everyman actor, Healy’s sensitive performance paints Bob as a firm, but gentle family man. Approachable as he seems, however, his actions hint at why Henry hasn’t come out to him – when, at one point, the tragic Ricky asks to chaperone summer Bible camp, Bob shows his immovable side by outright dismissing him.

Unfortunately, while Bob and his clan receive careful treatment, many of the supporting characters come off as woefully broad. The caricatures range from Jon (Jack Bell), a devout young man who interrupts Henry’s cool party mix to sing praise music, to Bonnie (Hanna Dworkin), a sanctimonious prude who casts disapproving glares at the bikini-clad girls. The film also verges on didactic as it depicts the clash between the mingling sexual progressives and the religious conservatives, which causes many of the exchanges to feel more like Afterschool Special material than naturally occurring dialogue.

While Cone manages to cultivate a sense of unease through his multi-narrative thread, the resulting climax proves flat and, at worst, convenient. As the sun sets on this pool party, conflicts resolve a little too simply, and everyone forgives a little too quickly, making this an enjoyable, but unconvincing look at religious hypocrisy and Christianity’s struggle to accept changing social norms.