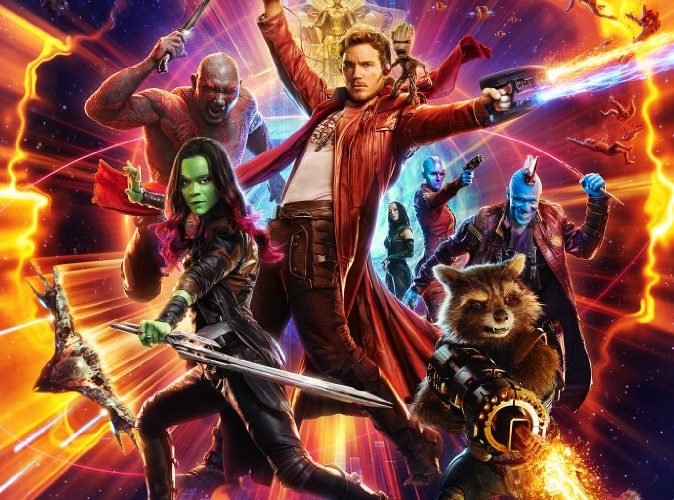 Review: ‘Guardians of the Galaxy Vol. 2’ is a Manic, Overstuffed Sequel

So says Peter Quill a.k.a. Star Lord a.k.a. not-Han-Solo (Chris Pratt) two thirds into Guardians of the Galaxy Vol. 2, and — without spoiling it in context — it serves as a hopeful mantra for director James Gunn. Unfortunately for all involved, this second installment only half lives up to its end of that bargain.

Before reuniting us with the team of cosmic misfits, Gunn tees things off in nowhere Missouri, circa 1980. Here we are witness to some quick but clunky exposition and stilted romance between Peter’s mother and Ego (Kurt Russell), a Celestial (read as “god”) who also happens to be a planet with a penis — just go with it. Flashing forward, the Guardians are now positioned as renowned heroes for hire, currently on loan to The Sovereign, a golden-skinned, genetically perfected master race of sorts. Led by Ayesha (Elizabeth Debicki), The Sovereign make deadly chase after Quill and co. once Rocket (Bradley Cooper, continuing to be one of the few reasons to watch this franchise) steals a few of their precious batteries — landing our heroes into the custody of Ego, who’s been searching for his long-lost son for decades.

As payment for their antics, the gang has taken Nebula, or that blue Karen Gillan character you didn’t really care about from the last one, the evil half-sister of Gamora (Zoe Saldana). Oh, and there’s a large subplot wherein Michael Rooker’s Yondu struggles to maintain control of his band of Ravagers while desperately trying to regain the good graces of Ravager leader Stakar Ogord. (Deep breath.) Oh, Sylvester Stallone is also in this movie, because who the hell cares anymore?

If it seems like Quill’s daddy issues, Yondu’s Ravager problems, an ongoing pursuit because of some really trivial batteries, and some sister-on-sister quarreling are a bit much, it’s because they are. Gunn maintains the unenviable job of giving each piece of his ensemble their due screen time to avoid making it the Peter Quill show, but the proceedings often feel manic, disjointed, and overstuffed. Vol. 2, much like its predecessor, rests contentedly on its lush color palette and retro soundtrack to try tricking you into thinking you’re not watching a Marvel movie.

That’s not to say all things on display are a waste of time. The more bizarre avenues Gunn travels down is where both of these films have excelled — Rocket and Yondu pinballing throughout hyperspace or Baby Groot (the tiniest of Vin Diesels) stealing dismembered body parts notwithstanding. Despite being a welcome reprieve from the self-seriousness that the MCU insists it doesn’t have, the zaniness becomes exhausting. Even Dave Bautista’s consistent deadpan buffoonery does wonders until it doesn’t.

The vistas are lush, the soundtrack is pleasant, and some wisecracks worthwhile, but it gets turned to 11 in a bath of sensory overload by the time it’s all over; something more inane than it is weird. It’s the blockbuster equivalent of a five-year-old loudly telling you the same knock-knock joke while spitting Skittles at you… but to the sound of a pretty good Spotify playlist.

Guardians of the Galaxy Vol. 2 opens on Friday, May 5.