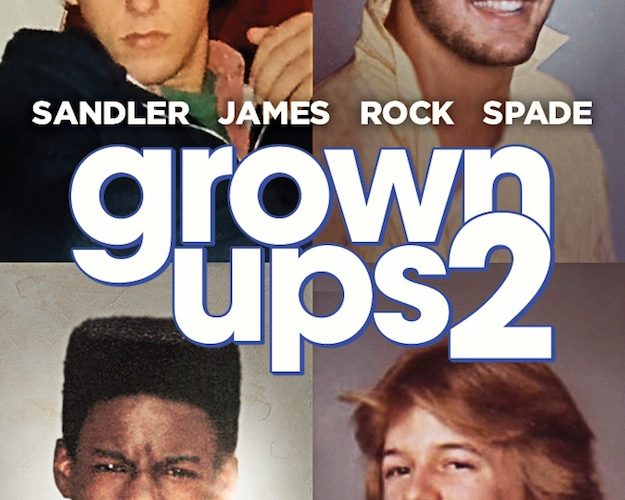 File this one under, “how can it be wrong when it feels so right.” Grown Ups 2 isn’t quite a guilty pleasure, but as a fun summer comedy it hits the spot, or perhaps a void (unless The Way Way Back is playing in your neighborhood, then go see that one instead). Still, I admit in spite of the projectile vomit, fart and poop jokes and all of the typical humor a fifth grader might enjoy (which have become the hallmark of many Adam Sandler productions), this is a genuine piece of comfort food and is mostly a good time.

Larry (Sandler), still married to fiery Roxanne (Salma Hayek), has returned from Los Angeles, moving to back to his New England hometown. Reuniting his childhood pals Kurt (Chris Rock), Marcus (David Spade) and Eric (Kevin James), the film is often a delightful sitcom. Taking place over the course of one day, this is a comedy that captures a sense of place, from the morning (where Sandler is woken up by a buck that ransacks his house) to the night, which ends with an 80s-themed party. Along the way there are some familiar faces, including Nick Swardson (as a bisexual bus driver who is taking drugs prescribed by a doctor he met at a Cypress Hill concert), Steve Buscemi, Colin Quinn, Tim Meadows, Jon Lovitz and Cheri Oteri. The film is a vintage Sandler-Dennis Dugan–Fred Wolf collaboration, thankfully smarter than their last few films, including the intellectually insulting Jack and Jill and the sexist farce Just Go With It. Grown Ups 2 has an awful lot of comedic talent that is underused, including Maya Rudolph and even Spade, returning as a ladies man who discovers he has a son who is potentially on the path to becoming a serial killer (played by Alexander Ludwig). But at 101 minutes, it’s the rare summer comedy that does not feel the need to bloat itself beyond reason.

Like a 90’s sitcom, the story features a multi-generational perspective of this given day, where the kids stand up for themselves and the adults learn that they both can still make the same mistakes they made when they were that age, all while providing advice to a new generation. There’s stuff involving a frat (the leader played by an uncredited Taylor Lautner), which feels unnecessary and makes for a rather lazy payoff that garners little laughs. The appeal here is clearly the chemistry of the four leads and the 90’s SNL cameos, delivering it all with only a minor insult to audience intelligence.

The pull of this kind of project is simple: I enjoyed spending time with these folks in this ideal New England hamlet. It’s not terribly deep and insightful, as moments in the aforementioned The Way, Way Back are, but Grown Ups 2 is comfortable and, at times, genuinely hilarious.