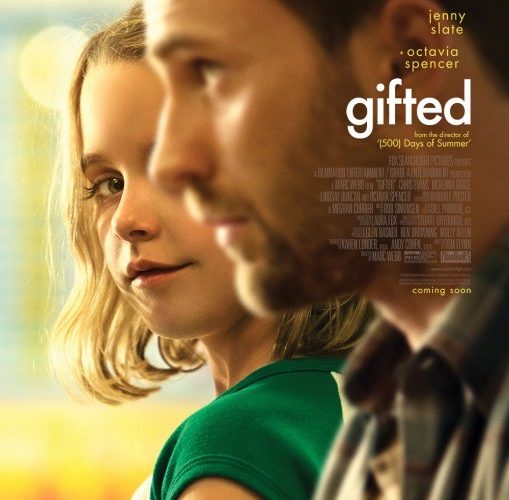 Review: ‘Gifted’ is Endearing, But Falls Prey to Conventions

Stories about prodigies are too often mired in tragic mental health issues or careers with boundless accolades and successes. Some can be done very well and others are redundant to the point of avoidance. The sub-genre of child prodigies is oftentimes even worse because it generally targets young audiences and therefore never possesses the nuance to be anything more than an upward trajectory with few pitfalls to traverse along the way. Either the child is stewarded by a selfless adult to greatness or the child is positioned to remind the adult what is great about his/her life. An authentic depiction of humanity’s familial messiness and misguided self-interest rarely appears. So Marc Webb‘s Gifted proves a welcome variation on the model despite also falling prey to its conventions.

The script is written by Tom Flynn, its 2014 Black List selection his first to receive a theatrical treatment since his own directorial debut in 1993. It centers on a young girl named Mary Adler (Mckenna Grace), a six-year old about to start elementary school even though her education already exceeds her age group—especially in mathematics. Her Uncle Frank (Chris Evans) knows this, but he’s also keenly aware that she’s in desperate need of friends and socialization. It’s been his responsibility raising her after his sister (her mother) died when she was a baby. His own mother (Lindsay Duncan‘s Evelyn) hasn’t been in the picture since his sister got pregnant—a decision she felt went against the young woman’s career potential as her generation’s most brilliant mathematician. Frank did everything he could—no slouch himself intellectually despite his current occupation as a freelance boat mechanic on a Florida dock—with help from his landlord Roberta (Octavia Spencer). He taught her the same stuff his mother taught him at her age and, like his sister, Mary took to math like a fish to water. He could have enrolled her in a more advanced school if the tuition wasn’t so high, but he also knew what that step would mean going forward. Frank saw his sister advance in Boston’s elite education system as his mother’s protégé. He saw how she was never afforded a real life outside of scholarly pursuits and knew the effect. She left Mary with him so that wouldn’t happen again.

Most Hollywood movies of this ilk would focus on Mary’s mother. Hers is the life of discovery and tragedy to be rendered “exciting” in ways math rarely is for non-mathematicians. As such, Gifted isn’t really about Mary’s intelligence or prospects as much as themes of parenting and family. It’s about the sacrifices we make for our children and the odious decisions pushed upon them to fit our own goals rather than theirs. Frank tries to make Mary promise not to be a “smart-ass,” but he knows her teachers (namely Jenny Slate‘s Bonnie and the school’s principal) will ultimately discover her genius. He will say, “Thanks, but no thanks” to their scholarship offers and they will be prompted to find Evelyn to intervene. And she’ll be only too glad. What follows is ostensibly a courtroom drama wherein the grandmother of means and motives (her daughter couldn’t quite solve the Millennium Prize Problem known as Navier-Stokes, but maybe her grand-daughter one day could) is pitted against the uncle who knows what it’s like to be under Evelyn’s thumb as well as what his sister would have wanted for Mary. The juxtaposition between idealism and ego is obvious—Evelyn is only too quick to do whatever she can to destroy her son’s credibility and suit her needs—but it’s also honest. We all know people like Evelyn: the type of parent who regretted his/her life choices and therefore decided to live vicariously through his/her child regardless of the child’s own ambitions. They can’t comprehend that their dreams aren’t shared.

I think the film’s biggest downfall is that Flynn and Webb (who’s been lost to the superhero machine that was The Amazing Spider-Man after turning heads with his debut (500) Days of Summer) paint Evelyn as a bona fide villain. There really isn’t any wiggle room except for a couple exchanges between she and Frank that feign belief in civility still being possible. The first mention of her is as a woman who left without looking back. Her first appearance is loaded with personal bias and greed. Duncan relishes her haughty reaction to Florida’s less than Ivy League accommodations while also going all-in with heated moments exposing her true intentions. And every deplorably conniving or unethical act only ends up being followed by another. It’s tough then to really be surprised by much that happens. Add clichés like a budding romance between Frank and Bonnie and you get sweetly saccharine comedy to counteract the ugly custody battle raging on. Flynn throws a couple curveballs in to prolong the resolution by utilizing Frank and Evelyn’s motivations as more than merely setting them on opposite sides of the fight, but these additional layers don’t necessarily forgive the otherwise simplistic trajectory. They augment the good versus evil dynamic and expose the truth of what drove Mary’s mother to her untimely death, but they don’t alter Mary’s end from what we assumed at the start. So Gifted proves cutely endearing and effectively poignant if not especially memorable in any “everyone needs to see it” way.

The drama is serviceable with a few exceptional bits putting tough questions at the forefront where Evelyn’s parenting is concerned. The acting is consistently good (Evans and Duncan shine while Spencer and Slate exceed their roles’ one-note purposes) and we do care for little Mary. I would have liked more moments like her sticking up for classmates (albeit overzealously) to show her as a product of Frank’s moral compass rather than a prisoner to the math her genetic propensity for being a robotic slave to Evelyn’s false “greater good” conviction erects. But while the film begins about Mary’s diverging paths, it finishes by using her as a tool exposing Evelyn’s failings. The latter would mean more if ever we thought “Grandmother” had hope for redemption. We don’t.