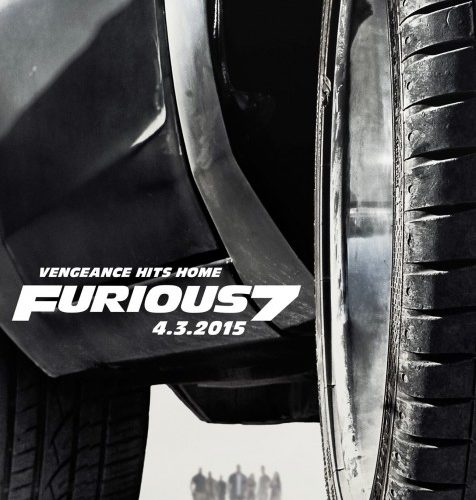 There’s something about this series that’s transcended any intellectual discussion about cinema. How else does a lamely derivative version of Point Break substituting waves with cars spawn six sequels in fifteen years? 2 Fast 2 Furious was so bad that star Vin Diesel turned down a twenty-five million dollar payday to be in it. Then the third entry threw everything out the window but horsepower and took things international across the Pacific. This is where the taste of its potential began, seeds of a blue collar Ocean’s 11 with muscles and sex appeal. The studio gave Diesel a piece of the creative pie to be “story czar” with screenwriter Chris Morgan and Justin Lin honed the movies’ visual style en route to box office juggernaut status. And somewhere along the line I became a fan.

If there’s one thing the franchise falters with most, however, it’s the transitions. I know people love Fast & Furious (Part 4) because it got the old band back together, but that necessity is exactly what makes it a bit of a mess. The filmmakers try so hard to bridge the gap—reintroducing Diesel and Paul Walker, breathing new life into Sung Kang‘s Han, etc.—that cohesive, consistent storytelling falls by the wayside. The same can unfortunately be said for Furious 7 in the opposite direction. With the tragedy of Walker’s untimely death during production and the installment’s promise to finally move beyond Tokyo Drift‘s chronological fast-forward, the moment arrives to bid the arc we’ve enjoyed despite (because of) its physics-defying stunts adieu. While that goodbye is heartfelt and important, it hurts the film’s standalone capability. I’ll credit Morgan for doing his damnedest to throw in everything but the kitchen sink, hoping to wrap us up in the hundred or so story forks to forget they’re all flashy vignettes loosely tied together. You’d think his killing off Han and Gal Gadot‘s Gisele would free some space for the already sprawling cast, but he just adds more to take their place. Not only does the brother of Owen Shaw (Jason Statham‘s Deckard) arrive as Bad Guy Number One, but in comes arms race heavy Jakande (Djimon Hounsou) as Bad Guy Number Two. And despite Dwayne Johnson‘s Hobbs and Elsa Pataky‘s Elena taking a backseat this go-round in the support forum, say hello to black ops commander Mr. Nobody (Kurt Russell) and hacker with a heart of gold Ramsey (Nathalie Emmanuel).

How there’s enough room for Roman’s ego, I don’t know. Luckily there is, though, since Tyrese Gibson‘s fast-talking bundle of anxiety transformed from obnoxious loudmouth in 2 Fast 2 Furious into the best character of the last three. Just like I’d watch an Ocean’s spin-off with Casey Affleck and Scott Caan‘s Malloy brothers, I’d buy tickets for the Roman and Tej (Chris ‘Ludacris’ Bridges) show. They may ultimately provide comic relief, but there’s also an injection of heart in their loyalty and respect for one another. And that’s saying something in a series about brawny men and louds cars bold enough to wear its heart on its sleeve. It doesn’t hurt that two more guys means two more vehicles for impossible stunts. Because while Furious 7‘s plot has trouble feeling natural, the action has never been better. I put a lot of this on newcomer James Wan‘s shoulders as a fresh eye for more kinetic energy and ways to experience it. The transition from horror suits him and the visuals utilized may be the slickest the franchise has seen yet. From quick cuts of speedometers, gas pedals, and hands gripping wheels to aerial shots showing more than two cars at a time, those cartoonish power zooms are all but erased from memory. Hiring Statham, Ronda Rousey, and the incomparable Tony Jaa helps infuse some Bourne Identity-type fisticuffs that get the blood boiling too. There are a couple of epic fights that make Fast & Furious 6‘s Gina Carano and Joe Taslim look harmless in comparison. The Rock may not get much screentime, but he earns it with his brawl against Statham.

This is the stuff we keep coming back for and Wan and company deliver on the promise set forth. If your script can allow for trips to Abu Dhabi, parachuting cars falling from extreme heights in the mountains, and insane jumps through skyscrapers you have yourself a Fast and Furious film. To have that level of silliness, though, means an acceptable loss of credibility. Instead of embracing this fact like the series has so often before, Morgan appears to want to go further into drama and ends up over-extending his reach. In comes a subplot mimicking Person of Interest’s entire conceit, a covert team searching for “shadows” and international bad guys, and a glossed-over psych study concerning amnesia added for another easy tug at the heartstrings. It’s disappointing when actual story becomes filler. There’s so much happening that the whole gets boring for long stretches throughout. Characters like Jordana Brewster‘s Mia officially become pawns adding nothing to the larger story, nods to past films become unnecessary rather than neat winks at the audience, and new players come and go in the blink of an eye. Don’t get me wrong: I’m glad the film isn’t just Dom (Diesel) and Brian (Walker) versus Shaw, but having the latter pop up inside every single set-piece anyway ruins any momentum the sub-plots have. It’s ultimately that movie whether Morgan thinks he has found a way above it or not. The way he tries to subvert the inevitability simply isn’t unique enough to fool us into thinking we can’t see the strings. Thankfully the action almost lets us ignore them.

Listening to the epilogue’s voiceover and wading through heavy-handed cues towards “one last ride” would have you believe this is the final chapter of a saga that evolved into a monster far-removed from its origins. The fate of a certain villain proves this probably isn’t true—after all, Helen Mirren still wants a crack at Dom’s pink slip too—but it is the close to Act 1 at the very least. We’re now in real time and Walker’s O’Conner is no longer in the mix. Anything that happens next should arrive with a new beginning and I welcome it. No one is beholden to F&F history anymore and the sky is the limit going forward as a result.