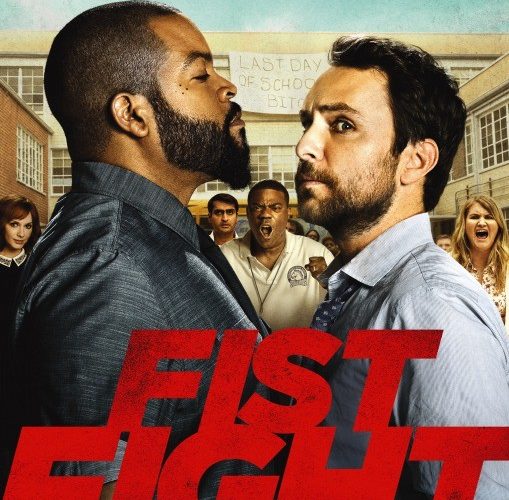 It’s hard to believe that It’s Always Sunny in Philadelphia has been on the air for twelve years now, but it’s still going strong. While the show opened doors for the entire quartet of relative unknowns, Charlie Day has been the one who’s leveraged his rising star into a pretty prolific film career, generally as the confused, manic comic relief. He fills that role on the show too, albeit at a level of imbecilic illiteracy that’s hard to fathom without watching yourself. But in 2015, ten years after the comedy’s debut, a different side of Charlie was shown. The episode was “Charlie Work” and it allowed Day to flip that energy into no-nonsense frustration and uncharacteristic productivity. He was confident, assertive, and coherent—and funnier as a result. I wonder if it was fate then that Day would sign onto Fist Fight four months after the episode aired to play a role with the potential for that same deranged aggression. The part of Andy Campbell is more or less a perfect distillation of the two “Charlies” minus the blatant stupidity. Van Robichaux and Evan Susser (Max Greenfield receives story credit alongside them) supply a pushover high school teacher forced into an escalating tornado of chaos for which a complete disregard for law and order is necessary to survive. It’s the last day of school, Principal Tyler (Dean Norris) has everyone’s head on the chopping block, and students are running wild with pranks toeing the line between destruction of property and criminal intent. Irreverence is hailed king.

Campbell would love to put his head down and soldier on. His wife (JoAnna Garcia Swisher) is pregnant, his daughter (Alexa Nisenson) asked him to perform a duet at her elementary school’s talent show at 2:30pm, and his occupational future is decided at 2:00pm. So when Mr. Strickland (Ice Cube) demands some A/V help in his classroom, Campbell politely refuses until circumstances change his tune. But when a troublemaking student turns Strickland’s lack of chill to eleven with the help of a fire axe, sanity is thrown out the window. Fast-forward to Tyler’s office where both men’s jobs are on the line if neither tells the truth of what happened to the student and pushover Campbell snitches. Strickland in-turn demands retribution: a fight after school, 3:00pm sharp.

Sunny alum Richie Keen is at the helm, his orchestration of everything looking more like an episode of Community than Day’s day job. The humor on behalf of Robichaux and Susser vacillates between both shows’ sensibilities with unpredictable characters testing the boundaries of human decency and intelligence (Jillian Bell‘s Counselor Holly and Tracy Morgan‘s Coach Freddie Coward) as the “sane” one (Day’s “good guy”) shows just how weasel-like his non-confrontational attitude proves. Strickland is not completely out-of-bounds with wanting to set an example about the consequences of actions. Sure he went too far and deserved to be fired, but the idea Campbell (or anyone) can exist with a self-serving disregard for others’ equally trying plights is hardly admirable. Andy preaches words and yet refuses to wield them. Fear motivates Campbell and empowers Strickland. This is why the former is easily walked upon and why the latter earns a hushed silence whenever walking into a room. Andy would rather jump through hoops to erase the notion of engaging in a #teacherfight than sit down and figure out common ground. There’s at least one moment where he believes he has diffused the situation and one where he actually does, but the crippling fear of not being good enough or strong enough to risk anything in his life exacerbates things instead. Fist Fight isn’t about needing to find some latent machismo to throw your weight around. It’s about standing up for yourself and what you believe. It’s about ratting out Strickland for the child’s safety, not your own.

But it’s also a hard-R comedy that nine out of ten people would be surprised to discover has a plot. Right from the start we know what we’re getting into as a banner is lowered from the roof with a curse word on it, Kumail Nanjiani‘s campus police officer Mehar is seen being harassed by students, and two teens are laughing in front of a display case with a laptop showing porn. The filmmakers ensure the tone is set for its unabashedly random nonsense, lewd behavior, and unrelenting profanity. We’re here to see how far Campbell debases his dignity to worm out of situations of his doing through attitude if not action and whether the build-up will actually be rewarded with a brutal war of attrition (it will).

If some satire about the state of public education squeaks in, even better. A few barbs do with the way the children and administration behave around teachers who are set-up for failure, but you’re experiencing the film wrong if this is where you’re focusing your attention. Embrace the juxtapositions instead. Revel in the absurdity of a coach believing the tradition to uphold is losing. Bask in the glorious usurpation of “guidance” as a concept with a counselor who is both a drug addict and unafraid to voice her fantasies about statutory rape. Let Nanjiani’s trademarked indifference tickle your funny bone and Norris’ tough guy irritation at being the target of student pranks put a smile on your face. Even Christina Hendricks‘ Miss Monet’s unsettling rage can entertain too. I’ll admit that the first two-thirds can be hit or miss thanks to an excess of repetitive absurdity, but it’s never boring. Keen’s addition of visual cues to express the gradual degradation of the day keeps things fresh alongside Day’s hilarious unraveling. His Campbell’s psyche is shaken to the point of drastic alteration, his backbone eventually found once his actions reveal themselves as petty. This growth (for lack of a better term) provides an extremely memorable talent show pitting his daughter, her nemesis, and a Big Sean song together; a couple instances proving how he’s better than who he projects himself as if only he took a contemplative step back; and a brilliant release of aggression via a climactic fight giving action films a run for their money.

It’s stupid, mindless, and crude, but I laughed throughout and admittedly can’t wait to watch it again. There’s a level of visual detail that should enhance subsequent viewings, a carefully constructed series of asinine events finding their punch lines much later, and an unforgettably unhinged central performance by Day to counteract Ice Cube’s formidable straight man. Bell and Morgan can get too silly, Hendricks can feel a bit over-board, and Swisher is all but wasted in a thankless “cheerleading” role, but you take the bad with the good when you’re legitimately having a great time. This is a case where the trailer depicts what you need to know. If you found it to be obnoxiously puerile, stay far away. If it got you excited for its idiocy, enjoy.