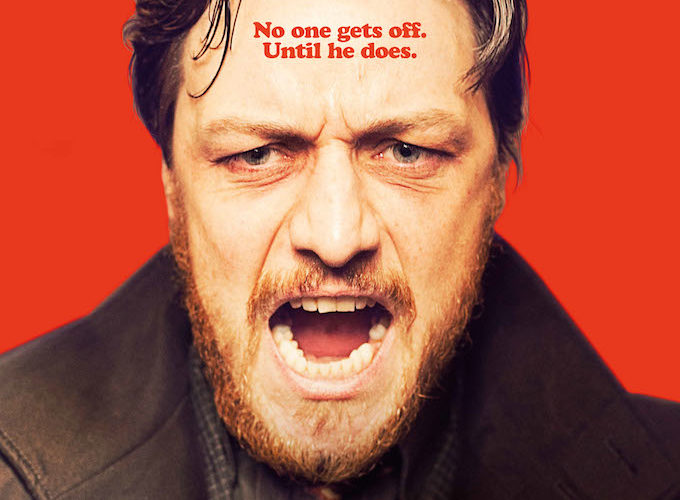 A movie not being exactly what you expect can lead to a certain kind of emptiness or hollowness once everything is said and done. When you walk into any situation desiring one thing and then leave having gotten something else entirely, it takes a moment for your mind to adjust to the shift. There may be disappointment at the bottom of your experience, a foundation laid by the apparent bait-and-switch you just went through, but does that mean that the experience was a net negative? After all, the thing you received might be objectively perfect in its own right, outside of your expectations.

These are the kinds of questions one might have to ask oneself after watching Filth. Coming from source material by Irvine Welsh, the author who gave the world Trainspotting, and with a blitzkrieg-bop marketing campaign, one could be forgiven for expecting Filth to be an equally joyful, irreverent, and ultimately spirited romp. Sure, Danny Boyle’s adaptation about Scottish heroin addicts had its notes of darkness beneath the manic energy, but at the end there was a kind of human hopefulness that blunted even some of the most sharped amoral edges.

The answer is that, taken on its terms, Filth is a flawed but ultimately engaging and harrowing bit of moral theater. Detective Bruce Robertson (James McAvoy) is up for a big promotion, one that promises to give both his professional and his personal life the boost he needs in order to draw himself out of his intense downward spiral. He’s been using drugs and drink as a crutch recently, but the crutch has become splintered and rotten, and it is only a matter of time before he falls headlong into the filth he seems to think he glides above. In order to secure this promotion, Bruce begins a campaign of decadent destruction targeting anyone and everyone who could either usurp him or influence his chances.

While this could serve as a framework for a farcical comedy of extremes, writer/director Jon S. Baird has more on his mind than just giving us a parade of dark humor. More than a spectacle of debauchery, Filth acts as the character study of a man caught in the echo chamber of his own self-destruction. It becomes clear fairly early on that, unlike the narcissistic, scared, and short-sighted protagonists of Trainspotting, Bruce has some very severe and very deep traumas that he is dealing with. As the story goes on and the pressure to solve a case and prove himself to his superiors mounts, Bruce’s actions come more as compulsive, reflexive ticks than well thought-out machinations. James McAvoy deserves the lion’s share of the credit for making this story work as well as it does. He perfectly modulates the slow deterioration of Bruce’s mental state, moving with ugly grace from charming scumbag with a chemically-aided Machiavellian streak to a man barely capable of holding a conversation without flying into a violent rage or hallucinating something terrifying. There is a shark-like menace to Bruce in the early going as he maneuvers around people, playing them easily, but the erosion that takes place over the course of the film causes all of his macho posturing and seeming cleverness to fall away, replacing it with something else much more sad and volatile.

In a weird way, this is a movie that works as a kind of antidote to the type of movie it was being sold as. Anyone who sat down to enjoy a predictable tale of a bad boy getting one over on the squares while snorting rails of cocaine and taking shots will be shocked at the stages of response McAvoy elicits from them. First comes grudging respect or repulsion at his bravado, then horrified worry as he slips, and finally something akin to pity or empathy once the true depths of his despair come through. By the end we have been drawn across the whole spectrum of response, beginning on his side, then swerving wide from his path of destruction, before ultimately finding ourselves on his side once more, though for much different reasons. While McAvoy’s performance gives everything a firm foundation, some other aspects of Filth are not as solid. Even though the direction is clever and energetic, some of the stylistic flourishes seem ancillary to the central plot, coming more from the mind of the director than the mind of character. Of course this makes it a blast to watch, but at the same time it might muddy what exactly we are supposed to feel about Bruce’s mental state or actions at the time. On the subject of clarity of intent, the script weaves somewhat artlessly from farce to drama, which is to be expected with a story and character like this, though tighter writing and editing may have made the navigation of those sharp curves feel more controlled. Even now, especially given the final shot and end credits sequence, I find it hard to know whether or not I was supposed to leave in a state of nihilistic laughter or bleak contemplation.

Still, days later I can’t quite shake some of the more outlandish moments of raw emotional honesty from my mind. It seems that, much like McAvoy’s Bruce, once you get down into the filth, it becomes perilously hard to wash yourself clean of it.

Filth is now available on VOD and in limited release.