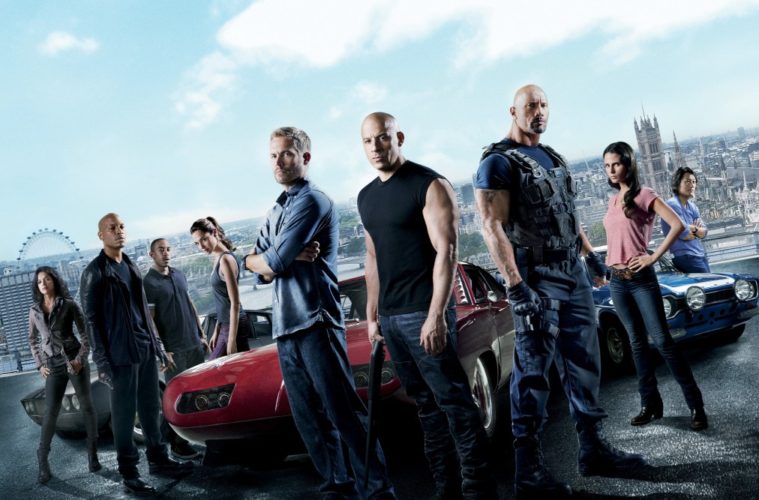 Fast & Furious 6 continues the storyline from the previous film, in which our lovable gang of criminals escaped from Brazil with a drug kingpin’s fortune. New parents Brian (Paul Walker) and Mia (Jordana Brewster) settle in a tropical paradise their infant son, Dominic (Vin Diesel) lounges in his bungalow with the beautiful Elena, and all is right the with world. Their serene existence is interrupted, however, when Agent Luke Hobbs (Dwayne Johnson) enlists them to bring down mercenary leader Owen Shaw (Luke Evans) in exchange for full pardons. The proposition becomes personal when it’s also revealed that Dom’s deceased beloved, Letty (Michelle Rodriguez), is not only alive, but aiding Shaw as one of his drivers. With so much at stake, Dom reassembles his fellow street racers and heads to London, where Shaw and his team plan to steal a valuable computer chip.

Unlike Fast Five, which hooked audiences with a jaw-dropping intro, the sixth sequel’s momentum builds slowly during the first half as it struggles to find new ways to reintroduce its familiar characters. Joining the leads are original cast members Ludacris, Tyrese Gibson, Sung Kang and Gal Gadot, but the film gets an extra boost from the addition of MMA fighter turned actress, Gina Carano. She follows up her Haywire debut by playing Hobbs’ partner Riley, an agent with a talent for kicking major ass. Her fighting skills are effectively showcased in stylized match-ups against movie bad girl Rodriguez, and their performances make Johnson and Diesel’s epic Fast Five brawl a distant memory. Lin invests plenty of screen time on the two women, giving them ample opportunity to steal the show from their male co-stars.

Fisticuffs aside, the main focus is still on the devoted Dom, who is pitted both physically and ideologically against Shaw. Their differences are emphasized to a mind-numbing degree; in keeping with standard action tropes, Diesel’s working class hero groans out lines like “Ride or die” or “You don’t turn your back on family, even when they do,” while Evans plays the articulate, elitist villain with understated ruthlessness. When he learns that Letty has amnesia – in one of the more laughably convenient plot points – Dom sees a chance to win her back, a hope that makes him vulnerable to his rival. “I can reach out and break you any time I want,” Shaw warns, foreshadowing a few coming surprises.

But, as expected, the thin story takes a back seat as the film attempts to outdo its predecessor. Similar to Die Hard, the action is amped up with each new installment, a requirement that leaves writers and directors scrambling to figure out the logistics of crashing motorcycles into low flying fighter jets. Lin meets this challenge by tossing plausibility aside and raising his characters to near superhuman status. The limits of belief are tested as the heroes emerge uninjured after being flung onto moving vehicles and above overpasses during the film’s many exhilarating chase sequences. The gravity-defying stunts represent the true nature of the genre, not as a reflection of real life, but as testosterone fueled fantasy. The film’s absurd quality does lead to some disturbing moments, however, when the villains take possession of a tank. As Shaw steers the giant machine down a busy freeway, I found myself cringing as cars were crushed with murderous abandon. Other than a few lame protests from Letty, there’s little regard for the countless unseen bystanders flattened during the chase. Though the massacre was added to emphasize Shaw’s extreme inhumanity, the dark gratuitousness did little more than taint an otherwise light, fun experience.

Fast & Furious 6 will certainly make a hefty profit on its name alone, with fans lining up on opening weekend to see the next chapter in Universal’s gearhead saga. Despite its flaws, the film doesn’t disappoint, and instead continues to strengthen a once tired franchise.