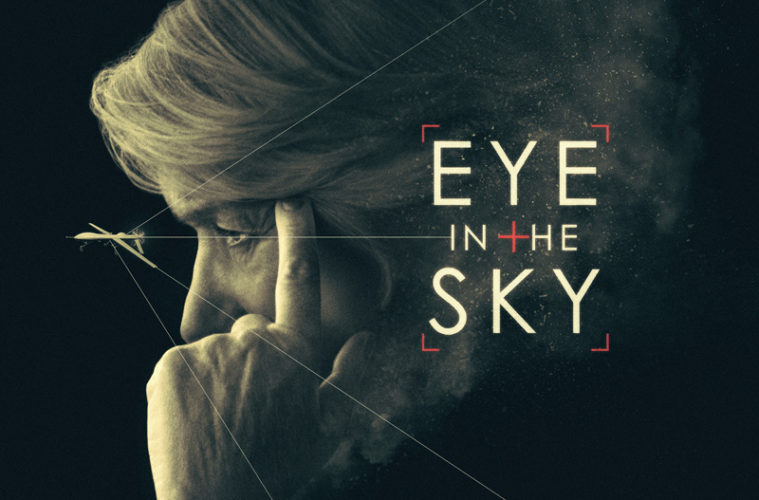 [Review] Eye in the Sky

Though it tackles drone warfare, Eye in the Sky removes itself from many of the thornier issues of this ultra-timely subject. It’s modeled as a gritty military thriller, but is also a light sci-fi film, its plot incorporating the use of technology that’s either not yet refined, like a hummingbird drone (which, believe it or not, is real), or purely conjectural, like a tiny beetle drone. Thus, as Colonel Katherine Powell (Helen Mirren) leads a secret mission in Nairobi, they have surveillance capabilities which give them a far clearer picture of the situation on the ground than any real such operation could currently hope for. One of the more maddening, frightening aspects of drone warfare is the ambiguity over just how many of the people who have been killed from tens of thousands of feet up were in fact “the bad guys.” That ambiguity is absent here.

The film’s trim running time feels even shorter, so focused is it on this single mission. The purpose of the ambiguity-destroying plot devices is to present characters with a variation of the trolley problem. Initially an operation to capture several wanted terrorists, it turns into a kill mission after the targets unexpectedly move into a slum under the control of Al-Shabaab and turn out to be putting together an imminent suicide bombing. But a young girl is selling bread right outside the house where the terrorists are meeting, which triggers a frantic debate among the team over the legality and morality of risking her death. When all you have is a hammer, you’re SOL if you need to do something more delicate than put in a nail. Gavin Hood‘s latest film might have more relevance when real-world tech catches up with it. It’s hard to even read the movie as a warning about the swelling power of the surveillance state, since all those little robot eyes in the field are shown as nothing but quite useful, their implementation reducing the danger posed to human agents. More on point is the film’s depiction of the Facetiming of war. Powell orchestrates everything from Surrey, takes orders from a general (Alan Rickman) and politicians in London, directs a drone pilot (Aaron Paul) who is in Las Vegas, gets information from Hawaii, and strategizes with the Kenyan officials actually on the ground in Nairobi, whose point man is played by Barkhad Abdi; it’s nice to see him not disappear after Captain Phillips).

As the situation complicates and even more players are brought into the fold, Eye in the Sky juggles everything with deftness (props to editor Megan Gill). The war room of Dr. Strangelove has been replaced with a long, complicated call to customer service. Alleged decision-makers instead volley responsibility back and forth, with few willing to take full command of the intimidating power offered by a Hellfire missile poised in the sky. It would have been fascinating had the film fully committed to dissecting such a body of war and where culpability resides within it.

The back-and-forth-and-sideways-and-up-and-down arguing is more interesting than the movie’s supposed moral dilemma — which, again, bears such little resemblance to the actual ethical problems that are often posed by drone warfare. It seems unlikely that a wedding would ever accidentally be bombed in the universe of Eye in the Sky. Moreover, the big trolley problem stacks the deck so ridiculously against the girl that it begins to rankle. It’s reminiscent of “The Cold Equations,” Tom Godwin’s sci-fi short story that supposedly concerns the laws of physics forcing an astronaut to eject a young female stowaway into space to preserve his cargo, but is really about storytelling contrivance (in the form of atrocious engineering) dedicated to the shock value of setting up a young woman who “has” to die for the greater good.

Eye in the Sky heads for the same end by instead loading on ridiculously great engineering. Having ironed away all the wrinkles of unpredictable circumstance, the movie poses a question that is in fact as absurd as any scenario posed by a philosophical essay — but at least those can wave away their ridiculousness because they simply want you to think. Despite its anachronistic tech, Eye in the Sky is laden with contemporary references. It opens with a reminder of the 2013 Nairobi mall attack, and the leader of the terrorists is an obvious analogue of Samantha Lewthwaite. The film insists upon its own relevance, but has none.

Setting all that aside, the movie’s suspense elements are often quite engaging. The acting ensemble is strapped into an ultra-serious, “Oh, God, I have to act against a screen the entire time” mode, but they do the best they can with it. In particular, Mirren’s Powell stands solid as a clear-eyed, cold-equation-calculating rock amid the dithering of her superiors, and Paul again shows that he can silently rage with the best of them. Abdi has a ball playing a down-to-Earth version of a Bourne role. I’d watch a movie all about his character. That would be much more preferable to a story such as this, which dwells with the faraway triggerpeople killing from comfortable chairs but which refuses to interrogate their actions in any truly meaningful way. While Eye in the Sky is sometimes gripping in the moment, the outcome of its trolley problem left me more pissed off at it than curious as to what I would have done in the same situation.

Eye in the Sky opens in limited release on Friday, March 11.