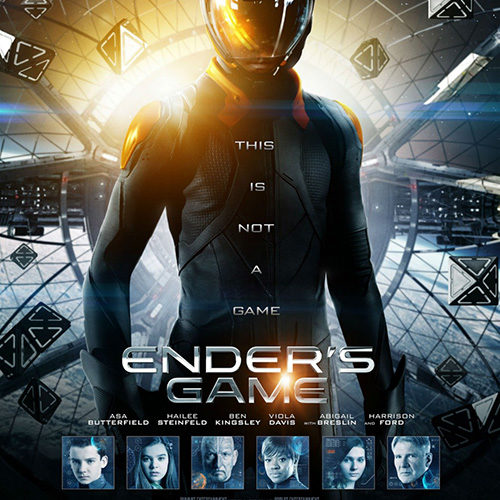 The blockbuster season has now officially passed, and gone with it are the nauseating evocations of the September 11th terrorist attacks that were present in some form or another in Man of Steel, Pacific Rim, World War Z, and Star Trek Into Darkness. With a budget about half of those films, it’s debatable as to whether or not Ender’s Game, an adaptation of Orson Scott Card’s Hugo and Nebula Award winner of the same title, qualifies as a “blockbuster” or a tentpole — but, in any case, it’s not above a 9/11 allusion or two, even if they are a tad more subtle. While writer-director Gavin Hood wisely abstains from depicting an attack at any recognizable location (or any Earthly location at all), instead letting a poster with the words “never again” do the talking, even a more tasteful appeal to our emotions can’t elevate his material’s preachy and tired politics. That the primary theme, pacifism, is probably the opposite of what the creator would want is ironic, but that’s perhaps the most noteworthy thing about a film that, in the end, is a strict genre work with questionable execution. Compared to the somewhat lengthy novel, Hood’s film is all skin and bones: Ender Wiggin (Asa Butterfield) is still a hyper-intelligent tactician who, along with other smart children, is being trained by the government to fight off the Formics to prevent more invasions, but any time the film starts to find a B-plot — such as the one Ender’s siblings provided in the novel — they are quickly brushed aside. His siblings, Peter (Jimmy Pinchak) and Valentine (Abigail Breslin), barely have more importance than to exist so Ender can talk about them, and if early scenes between Ender and Petra (Hailee Steinfeld, of True Grit fame) make you think there’s a romance to be had, well…

Although this single-minded focus ultimately hurts the film, it does amplify the narrative behind Ender’s Game. Quick pacing keeps the film moving forward, mirroring the desperation of the government and the (seemingly) small time frame, while an impressive array of special effects  make simulations in zero-gravity environments as dizzying to watch as they must be to experience. While the actual fights themselves lack choreography — Ender’s Game is far more interested in being thoughtful than visceral — the spinning camera and a tendency for long shots impressively convey the scale of the games themselves, both literally and otherwise, and the desire to paint these realistically rather than spectacularly (save for one occasion starring Ender) actually makes them more enjoyable. In this case, less — whatever that means in the context of a space simulation within a $110 million dollar film means — is more. Still, the film opting to make one think instead of letting audiences simply enjoy the ride doesn’t pay off, as there is very little to think about in the first place. There are multiple speeches questioning the morality of raising children as war machines, and doubts about the necessity of a preemptive strike on the Formics are conveyed often enough to make the ending preachy and obvious instead of surprising and difficult. At the end of the day, this is another blockbuster that buries simple political messages — e.g. invading the Middle East after 9/11 was wrong — behind even simpler analogies, then asking the audience to pat themselves on the back for “getting it.” It isn’t the most egregious offender (that award goes to Elysium), but it is the one that seems to think the highest of itself, as the abundance of monologues would suggest.

Not helping anything is the character writing: Ender is blameless in every situation, and every questionable act is something he is provoked into or an accident that is quickly written off; while he isn’t beyond feeling guilty or immoral for what he’s done, his quick and insurmountable dedication to all that is right only makes him less interesting. His friends, family, and commanding officers are rarely fleshed out, either, wasting the presence of Harrison Ford and Viola Davis on standard archetypes. Ford, in particular, seems content to phone in the part, but Davis and the kids do everything they can to bring a little vitality to this rather stale tale. Their parts, unfortunately, are two-dimensional caricatures that don’t add drama to the film so much as predictability. What is left, then, is a story chugging along from A to B to C and onward without letting any complicating factors or stories bring proper gravitas to the problems at hand. If your big hook is thematic complexity, it isn’t good when your biggest rewards are games of capture the flag in space and, conversely, the drollest moments are those in which characters try to work out their feelings, almost exclusively in heavy-handed ways or preachy extended monologues. Far too benign and, in this blockbuster season, far too tired to leave any bad taste in the mouth, Ender’s Game is better the less one thinks about it.