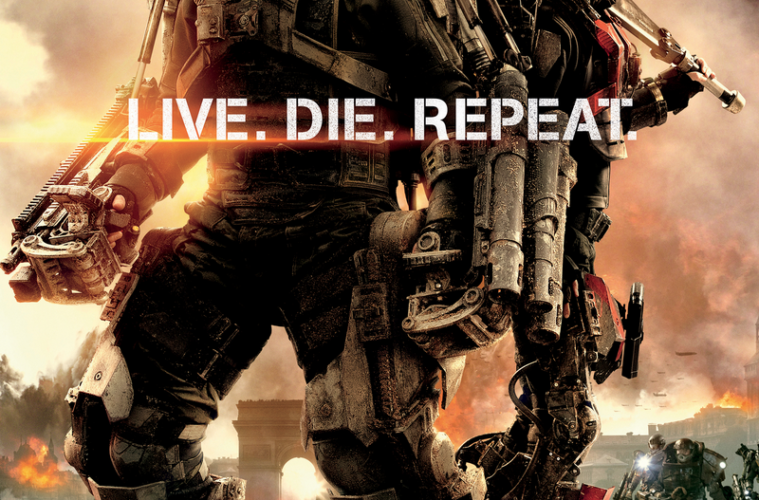 Edge of Tomorrow, Tom Cruise’s latest summer action vehicle, fits nicely into the group of recent blockbusters concerned with altering a distant past. Like X-Men: Days of Future Past or Godzilla, Edge of Tomorrow is also adapted from existing material, this time a Japanese science-fiction novel titled All You Need Is Kill. Created by Hiroshi Sakurazaka, it’s the backbone for director Doug Liman’s tent-pole about an unfortunate military major trapped in a perpetual time loop.

Cruise has crafted a body of work consisting of drastic and bold characters; he has taken his star persona and flirted with physical and emotional recklessness to craft memorable moments in films as diverse as Magnolia and Mission Impossible: Ghost Protocol. These characteristics are notably absent at the start of Edge of Tomorrow, as Cruise plays Major William Cage, a figurehead used to sell a war to the public against an invading alien species. Cage is content in front of cameras and far away from the battlefields where humanity lays in peril. There’s a disconnect between his motto, “We fight. That’s what we do” and his genuine feelings about combat. In short, Cruise is playing a coward, eager to admit to his superior General Brigham (Brendan Gleeson) that he “can’t stand the sight of blood, not so much as a paper cut.” Getting the action into gear, Brigham has Cage sent to the front lines against his will. By skewing Cruise’s star persona, Edge of Tomorrow unfolds unexpectedly. Before the cataclysmic events that create a Groundhog Day-esque scenario, Cage finds himself dealing with an equally frustrating set of circumstances; the rigid bureaucracy of an army tasked with exterminating aliens. Bill Paxton enters the film as Master Sergeant Farell and articulates the thematic drive amongst the set-pieces: “Through rigid discipline we are masters of our fate.” Cage is promptly suited in a high-tech killing suit, dropped on the beach of a D-Day attack against the tentacle-creatures, ignominiously killed and promptly awoken to relive it all over again.

Under the training of the “Angel of Verdun,” a lethal and vivacious soldier named Rita (played by a lethal and vivacious Emily Blunt), Cage attempts to uncover the mystery of his time-captivity and the two progress further each time before perishing. The chemistry between Blunt and Cruise is the most appealing element offered here, with Cruise sidestepping from the role of obvious hero to allow Blunt to own sequences with her brazen fighting skills and moral laxity. Rita is quick to send Cage back a few days with a bullet to the head at the slightest error during their training. Their interactions, whether they are finessing a strategy they have tried countless times before or uncovering a little more about the other, supersedes the impressive and frenetic FX battles that unfold across beaches and iconic European cities. Liman adopts a video-game sensibility in terms of pacing, with economic jumps from Cage’s deaths back to the start of his loop, resulting in both a handicapping and defining aspect of the narrative. The film refreshingly relies on an unyielding forward momentum and levity that many summer blockbusters have swapped out for “grittiness” and slower-paced moodiness. The drawback here is that the core of Edge of Tomorrow often feels like a prolonged montage, immaculately polished and vibrant, but lacking the depth or cohesiveness of more interesting and realized works of science-fiction like 2012’s Looper, also featuring Blunt. However, beneath the cacophony of explosions and aliens, there are enough interesting things occurring in Edge of Tomorrow that merit one’s time and attention. As the sweltering days of summer continue and we progress further into the blockbuster season, Liman has crafted a piece of entertainment that satisfies our base prerequisites for spectacle.