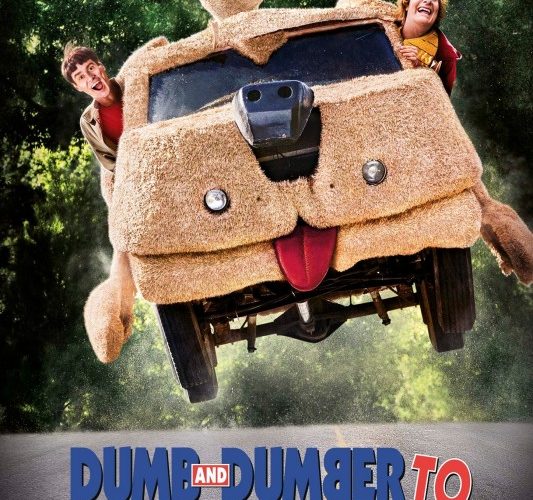 [Review] Dumb and Dumber To

Not even the movie that started it all can save the fledgling career of the Farrelly brothers. Despite reading an interview of them speaking about how great the sequel’s script was due to its being almost identical to the first, I entered their last film with an open mind. The same and more, they said? Come on—it’s been twenty years. They should have noticed by their diminishing box office returns this past decade that the comedy used to propel them towards A-list status in the ’90s wasn’t working anymore. We can only take so many fart jokes, manchilds, and offensive material before we begin to look elsewhere for something fresh. Dumb and Dumber was fresh in 1994, but now Dumb and Dumber To is just plain tired. The brothers did something right, though, realizing their debut’s one flaw—yes, I kind of love the original—was attempting to have a plot and going overboard in executing it. While revisiting the first recently I found its need to tie up loose ends concerning the whole kidnapping MacGuffin derailed the belly laughs had along the journey. Thankfully, they’ve made sure their follow-up stays simple with its road trip being more conducive to the series of skits and pratfalls we enjoy watching Lloyd Christmas (Jim Carrey) and Harry Dunne (Jeff Daniels) fall prey to without fail. Harry needs a kidney, discovers he has a daughter, and puts two and two together to make twenty-two before hitting the asphalt with Lloyd in tow. Two decades is a long wait, though, and the actors’ sense of endearment has certainly expired.

It doesn’t help matters that they’ve been rendered even dumber than before. At least there were a couple glimpses of common sense filling the gaps when the duo weren’t being overly juvenile for goofs back in ’94. Now it’s as though they’ve regressed to simply being clueless since one or both of them mistakenly says a wrong word every ten minutes or so—a pace that should reveal they’re trolling us with carefully targeted puns when, in fact, reality proves it’s the Farrellys pick-pocketing our cash for easy laughs. More than their diminishing IQ, Harry and Lloyd have also been neutered of charm. With no one like Mary Swanson to win over, they tread water merely trying to make fools of each other instead. What about the daughter (Rachel Melvin‘s Penny), you ask? Not even she can provide a real person with which to humanize these dolts because she’s literally as dumb as they are. It’s no surprise then that she disappears for a majority of the film, since the abundance of idiocy her inclusion creates appears even too much for the Farrellys. We’re therefore relegated to watching our unwitting heroes face off against this entry’s underestimating foes played by Laurie Holden (Adele) and Rob Riggle (Travis). Mr. Andre and Mental they are not, though, thanks to each being used as fodder for jokes when applicable rather than consummate straight men for the stars to play off. I didn’t mind getting a few breaks from the grown ten-year olds’ shtick — I just didn’t need more lazy stupidity in their place.

The biggest shame, though, is that the directors weren’t lying when they said Dumb and Dumber To would be the same as its predecessor. This thing is littered with callbacks spanning fun (Brady Bluhm‘s Billy) to lacking (this round’s fantasy love sequence ending in a ninja fight is mild in comparison) all the way to clichéd (someone’s an undercover cop somewhere). Even the Big Blue Bug makes an encore appearance. I get that a big part of appealing to fans hinges on injecting this stuff, but I couldn’t help feeling most instances seemed tacked on rather than cohesive pieces of the new puzzle. At least their reintroducing Fraida Felcher (a fantastically self-deprecating Kathleen Turner) works swimmingly and the road towards the Mutt Cuts van glimpsed in the poster is orchestrated well. So not all is lost. A few doozies are fully contained in the film itself, proving that the Farrellys can at least do a few callbacks well. So don’t fear when some gags fall a bit flat at the beginning because the pay-off of their thematic set-ups will arrive later on. I won’t spoil what they are, but get ready for a couple pretty funny and abrupt deaths to help wake you up when the pace slows. These smartly mirror similar deaths in the original, which might make one more frustrated, knowing they had the capacity to turn old gags new again, displaying how they squandered the rest’s potential.

In the end, Dumb and Dumber To‘s failure is ultimately due to its redundant nature and the Farrellys not understanding what we loved about the first. Carrey and Daniels—who both seem so removed from the original that they’re trying way too hard to recapture that magic through overly hammy performances—were memorable because their stupidity helped them traverse an intelligent landscape of people watching and laughing just like us. When you dumb down the world they inhabit with cheap bimbo jokes from a likable Melvin and buffoonish missteps from a wasted Riggle, it makes their idiocy sad rather than joyful. Seeing them both go to eleven for joke after joke waters down their appeal, too. The quantity of gaffes definitely doesn’t overcome the lack of quality. There were laughs, but nothing that will stand the test of time.

Dumb and Dumber To opens wide on Friday, November 14th.