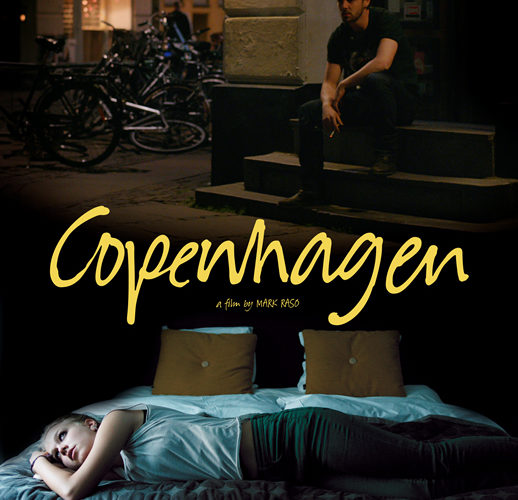 Being in the right place at the wrong time is a fundamental issue in Copenhagen, and it’s one that I feel completely in tune with. I’ve gone through issues of timing not lining up in my own life and so perhaps that should be an admonition that I am preordained to enjoy this film. Yet, I saw many flaws and felt many things beyond just empathy for the characters. Will (Gethin Anthony) is a guy that I’d likely never be more than an acquaintance with — he’s cocky and constantly pursues one-night stands with women. He’s smooth when he’s on his game, but he’s also a bit tone deaf to the ins and outs of lasting relationships, and more importantly, friendships. It’s likely the reason that when he and his best friend Jeremy (Sebastian Armesto) decided to make a boys trip and head from America to Copenhagen, Jeremy brought along his girlfriend (Olivia Grant) as well, killing the buzz Will was looking forward to.

Instead of crashing at hostels, meeting locals, and finding loose women, he’s been given the unfortunate circumstance of staying at a nice hotel while his friend’s gaze is firmly planted on his girlfriend. (It doesn’t help that Will doesn’t like her.) He tells Jeremy this again and again, and even confronts her about it at one point. When he hears them knocking boots one night in the next room he decides to bring back a girl of his own and obnoxiously make obviously loud sexual noises and encourages her to do so as well. It’s at this point that you start to wonder what you’ve gotten yourself into as an audience member. How much more insufferable can this guy get? And that’s when they leave him behind, off to get married. Now Will is by himself and we learn that beyond ladies, he also has a mission. In his possession is a long-lost letter written by his father to his grandfather, who presumably resides in Copenhagen. So, Will focuses on something beyond himself for seemingly the first time in his life and we see how much he cares about this. He’s persistent and unafraid of asking for help. He speaks so little Danish that he has an extremely tough time getting by but one day he meets a young and vibrant local named Effy (Frederikke Dahl Hansen). She, like any sensible woman, initially shuns him as a cocky and brash American. But she takes sympathy on him as well—he clearly needs help and isn’t likely going to find it soon. It’s Effy that becomes the redeeming quality here and it’s her that causes one so much pain as well.

She’s exuberant, trusting, and free, and we know Will is no good for her. But they avoid the obvious attraction they hold to one another to continue on their quest and it’s here that we begin to fall for the city itself. When they first set out on their quest, Effy jumps on her bicycle—seemingly her only form of transportation that isn’t as a mass—and tells Will to borrow one. Off they go, down bumpy streets and wondrous sights. There’s an aging beauty shown in the locale that makes you long for something beyond just a normal suburb in a big American city. Eventually, the tension between them starts to become obvious to even them. You see them get close but they never actually act on anything. That’s when a clever and cruel twist is thrown into the film by writer/director Mark Raso. It’s one that vitiates the romance and yet reveals a new wrinkle for Will.

Over the course of 98 minutes we see Will grow, but he doesn’t show it in the typical fashion you might expect — he still grows from where we knew him. Thankfully, Anthony’s portrayal never falters. He is able to keep from swerving too far one direction or another and despite his obnoxious start, you still can’t help but like the guy. However, the real star is Effy, who is portrayed by the then-19-year-old Hansen. It’s a layered and clever performance that will have you falling for her just as Will does. She’s the perfect guide to Copenhagen and one of the reasons that the film’s flow is broken open in the first 15 minutes. She’s the best thing to happen to Will and the best thing in Copenhagen as well.

It’s difficult to have a protagonist I was rooting against at first, but eventually, the alluring setting of Copenhagen and the brilliant performance from Hansen creates a uniquely enjoyable film. Again and again I was wondering why I had a smile on my face and it was those aspects that kept me charmed. Yet Raso understands that for a film like this to work, Will has to be redeemed in some ways and he goes down multiple avenues towards that goal. Whether he ever achieves it is up to us as individual viewers, though, and the film is all the better for it. Copenhagen challenges our notions of what is meant to be in film, and I’m glad it exists.