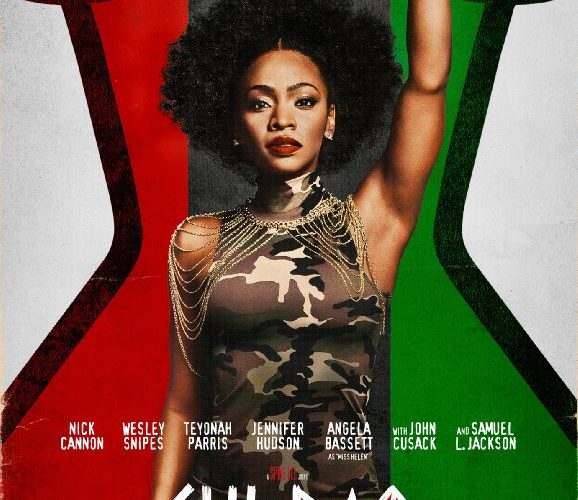 Spike Lee‘s made his career by tackling, head-on, important socio-political issues revolving around race, inequality, and prejudice. With his latest entry, Chi-Raq, a title that evokes an intrinsic relationship between the midwest city and the middle east country, the NYC-based filmmaker is back with a furious vengeance. Creating a hybrid between a modern-day musical and a spoken-word poetry slam, this film embodies the essence of protest and captures perfectly the mood of countless frustrated Americans who attempt to affect change through demonstrations. It’s not a straightforward narrative, either, instead eschewing dramatic conventions for powerful vignettes that bring the important messages of the film to a boil. Based loosely on Aristophanes’ ancient Greek play Lysistrata, Chi-Raq interweaves the thematic exposé of sexual relations from the original text with the epidemic of gang-war violence. The film opens with large bold red letters reading ‘This is an emergency” as the sounds of blistering alarms echo, followed by an alarming statistic that there have been more gun-related deaths in Chicago than slain U.S. soldiers in Iraq and Afghanistan. Samuel L. Jackson is Dolmedes, a narrator of sorts speaking directly to the camera and freezing time á la Zack Morris in Saved by The Bell. He tees up the hostile situation between two fictional gangs, the Spartans and the Trojans, who are at each other’s throats and whose violent rivalry is spilling the blood of innocents caught in the cross fire.

Irene (Jennifer Hudson) is the mother of one such innocent victim, finding her 10-year-old daughter gunned down amidst a shootout between the heads of each gang — on one side the cavalier thug-turned-rapper Chi-Raq (Nick Cannon) and, on the other, the comically awkward Cyclops (Wesley Snipes). In a desperate effort to quell the unrelenting violence, Miss Helen (Angela Basset), a wise mother who lost her daughter years ago, enlists her sisters to use the power of female sexuality to start a revolution. Brought along is Chi-Raq’s girlfriend, Lysistrata. She’s played by newcomer Teyonah Parris, whose raw energy and charisma steals the show among such a fantastic ensemble cast. By teaching her about the power that women can have over men, Lysistrata and her team lead a sex strike against their partners until this violence stops. Their slogan becomes a mantra of female empowerment: “No peace, no pussy.”

Chi-Raq can be deliriously satirical, bouncing between comedy, romance, and tragedy, yet it primarily serves as a wake up call for the disenfranchised people suffering in this country. John Cusack has a brilliant, impassioned cameo as a reverend delivering the eulogy for the young deceased child; his passion and words are as vibrant as a speech from Martin Luther King Jr. This feat is made all the more impressive by the syntax of the dialogue (co-written with Kevin Willmott), where each conversation effortlessly rhymes together in a subtle yet poignant fashion. While the film occasionally teeters on overly preachy rhetoric, the message is never anything but powerful. This is as entertaining as it is culturally important, and proof positive that Spike Lee still retains that edge which made him an essential voice in the first place.