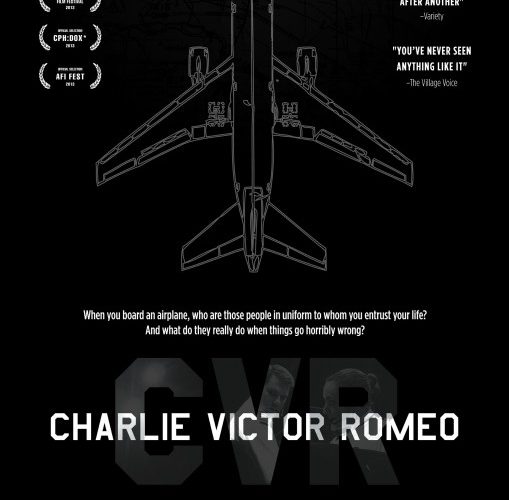 Verbatim theatre is a genre that aims to provide a certain kind of honesty through anonymity. Performances are derived from primary source documents like interviews, or in the case of Charlie Victor Romeo, transcripts of NTSB reports of actual aviation emergencies. Verbatim theatre is essentially a vehicle for the replication of primary source text through multiple mediated lenses, achieving a wholly different role than documentary filmmaking. The effect of the film adaptation of Charlie Victor Romeo is claustrophobic, a 3D film contrary to the typical conventions of form. It will not benefit from the larger-than-average premium branded large format venue (like IMAX and RPX), but seems custom made for the intimate screening rooms of Film Forum.

Shot over the course of a few evenings in a black box theater in front of a live studio audience, the film adaptation of Charlie Victor Romeo (performed since 1999) is a harrowing psychological experience. Centered squarely on the text, the film’s sets are minimal; Flight, this is not. The utilitarian cockpit set looks like something out of 1970’s Saturday Night Live, the same set is used to depict six emergencies with varying outcomes and durations. Often split-second decisions are made, complicating the notion of “human error.”

The film is inherently cinematic while also rebelling against cinematic form. Its shots and sets are limited to a basic multi-camera set-up with an awful lot of dead space (again, the stage appearance recalls a live TV performance). The film’s surround-sound mix is excellent: subtle, yet wholly artificial. While some may find its adherence to the codes of black box theater to be a detriment to the storytelling, I found the restrictions to be fascinating. Robert Berger, Patrick Daniels and Karlyn Michelson (also the film’s editor) have crafted a completely immersive, controlled and engaging experience in a film that will leave a lasting impact.

Credit is due to the performers; a rotating cast appearing in each instance, they include Patrick Daniels, Noel Dinneen, Irving Gregory, Debbie Troche, Nora Woolley and Sam Zuckerman. Charlie Victor Romeo’s emphasis primarily on text is particular; the “script” in this case transcripts from the cockpit voice recorders, taking precedent over the representations of the flight crews involved in these events. They are playing anonymous professionals stuck in the most trying of times.

The pace of the show is dead-on, slowly building as we watch in horror, and it hooked me right away. Spoiler alert: The first incident is a success, as American Airlines Flight 1572 sustained damage upon crashing the into a few trees outside of Hartford’s Bradley International Airport in 1995, but landed with no fatalities. What follows is extraordinarily horrific, a drama played out in professional jargon with snap decisions. While some segments are longer than others, many end abruptly. In spite of its flaws, Charlie Victor Romeo is worth seeking out, as a thought-provoking, original, form-breaking film is a rare thing.