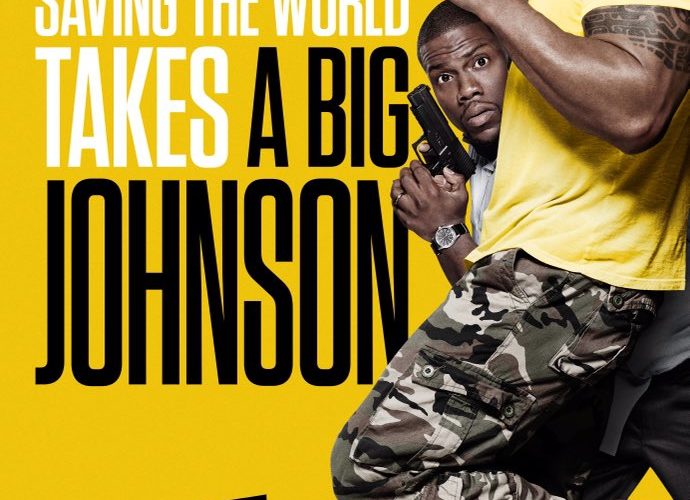 Considering Dwayne Johnson‘s relatively newfound dedication as Hollywood’s action franchise Viagra and Kevin Hart becoming perhaps the biggest draw in comedy over the last few years, it was a mathematical certainty they would cross paths for their own action-comedy. The result is Central Intelligence, which markets itself as a “Little Hart and Big Johnson” teaming up to save the world from shadowy threats. If one finds Hart’s erratic fish out of water dynamic playing against Johnson’s calm, cool, and collected demeanor appealing, the quippy banter comes in spades. As mildly amusing as it can be, that’s just about all there is to this blandly plotted excuse to team up two of Hollywood’s biggest audience wranglers.

After being ridiculed by everyone — and to be clear, everyone — in his high school class except Calvin Joyner (Hart), Robbie Weirdicht (Johnson) has buried the pain deep inside. Twenty years later, he now goes by Bob Stone, transforming himself into a ridiculously ripped, deadly CIA agent while Joyner, once a beloved high school stand-out, has a dead-end accounting job and believes he leads as lame a life as possible. With their class reunion coming up, he accepts a Facebook friend request from the mysterious Mr. Stone, leading to a meet-up for dinner, quickly interrupted by all-out mayhem as a government manhunt ensues.

Rather than playing his usual action archetype, Johnson aims something for something else here and impressively pulls it off. Stigmatized as a child with no friends, after years of burrowing this trauma, his social awareness is a few steps off. Leading a lonely life, relying on pop culture references such as Sixteen Candles, Road House, and Pitch Black as his foundation, Johnson plays things goofily aloof with an underlying sadness as if he never matured beyond that day when he was thrown across a gym floor naked in front of his entire class. When Central Intelligence gets unnecessarily serious, take one glance at an almost alarmingly elated Johnson in his unicorn T-shirt and fanny pack, and all is right. Failing to pick up social cues with his overly enthusiastic, occasionally shy demeanor works well against Hart’s shriek-heavy confusion. Inviting himself in to sleep over after their initial meet-up is only the beginning, as he continually ropes Hart’s character deeper “in” to the conspiracy, when all he wants to do is firmly get “out.”

As for the plot, it involves marriage therapy, murder, cover-ups, MacGuffins, and the true identity of the big bad (aka the Black Badger). It’s almost always nonsensical, constructed solely to put Hart in a bewildered, exhausted state and Johnson there as the straight man for him to bounce off, which would be all well and good if the storyline wasn’t so dull. It’s perhaps a testament to Hart and Johnson’s affability that whenever we turn to anything strictly involving the government manhunt, headed up by Amy Ryan‘s Agent Pamela Harris, the film stops dead in its tracks, particularly in the last third. The string of cameos also seem to rest solely on the surprise of a recognizable face rather than resulting in any effective comedic or dramatic effect. (There is one exception, with a certain actor playing up his greatest strengths in the most hysterically cruel way.)

On a technical level, director and co-writer Rawson Marshall Thurber captures the action like one would expect in this post-Bourne era, mistaking cutting on impact as viscerally exciting. There’s also the larger problem of what seems to be New Line Cinema’s flavorless house style (seen in last year’s Vacation and Thurber’s previous feature We’re the Millers, both shot by Barry Peterson). Brightly lit with as large a depth of field as possible, there’s no texture or variety to any sequence, taking suspense out of the action and any semblance of weight out of the drama.

While it fails to deliver convincing action and its comedy feels watered down, Central Intelligence does get the “buddy” aspect correct. Doing their best with a script (also by Ike Barinholtz and David Stasser) that feels all-too-safe, Johnson and Hart manage to prove that a movie can glide by just enough on sheer charisma alone.