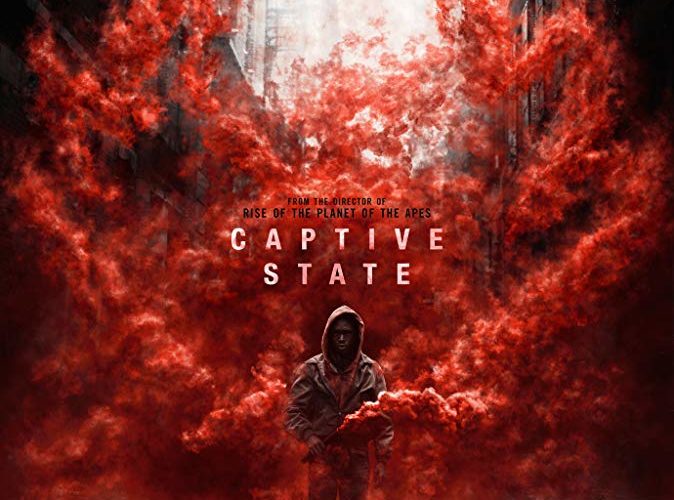 Captive State could very well be set in an alternate timeline of Arrival, one where the communication tactics of Louise Banks (Amy Adams) failed and the aliens stayed put to govern over humans. While this has happened worldwide, Rupert Wyatt’s grounded new sci-fi thriller specifically hones in on Chicago, where top government officials work with the alien forces in hopes of eventually getting off the “dying rock” that is Earth. Meanwhile, nearly-eradicated factions of the resistance aim to hold on to a semblance of hope that humanity will prevail as they fight back. With the kind of world-building that seems better suited for the pilot of a TV series, Wyatt peppers intriguing details throughout but gets too tripped up in a deluge of timely messages that he loses sight of his characters in this jumbled, peculiarly-structured narrative.

The first sign of disaster comes with the clunky prologue, in which this dystopian world is set up by an anonymous typist on screen. It’s nine years after first contact. The alien lifeforms–resembling something akin to Groot if he was a really angry, mute hedgehog–occupy “closed zones” miles below the ground where they “are now our legislators.” This set-up allows Wyatt and co-writer Erica Beeney to check off a laundry list of opportune imagery, including but not limited to widening income equality, the construction of a wall, deportation, overreaching government surveillance (including wiretapping, drone surveillance, and cellphone spying), propagandistic rallies, police brutality, a rising up against authoritarian rule, censorship, political sex scandals, and even fracking.

If one is wondering why I haven’t elaborated on any specific characters yet, it’s because the film seems to forget them as well. After seeing a traumatic childhood incident involving an alien attack, we’re introduced to an older Gabriel (Ashton Sanders), living his days in a prison-esque existence harvesting video footage off memory cards to help the aliens better track our every move. He has hopes of finding a new life, even though he’s being tracked by a police officer named Mulligan (John Goodman), who harbors a deeper connection under the surface. In an admirable, but unsuccessful nod to The Battle of Algiers, Wyatt then shifts gears entirely as we meet a rebel group of outsiders who are planning a bombing at a major political rally. With a stadium full of people seeming living a happy existence, one wonders how exactly the other half lives under this alien rule, but Wyatt is only interested in exploring this small group of dissidents, leaving numerous questions on the table for how society functions in this near-future. There’s indeed some wordless intensity in seeing this cell attempt to pull off their mission, but it is only in fits and starts and the intended culminating effect doesn’t stick.

What makes things even more frustrating is the specters of more-interesting ideas and elements haunting the film. Invisible bombs and bug tracking devices implanted in throats make for compelling visuals. There are shades of another sci-fi franchise Goodman is involved in, Cloverfield, throughout; a series which at least began with more compelling, intricate world-building. James Ransone’s appearance will make one think of The Wire, which explored political battles with the kind of grounded realism Wyatt seems to strive for here, yet he can’t get a grasp on the intimacy nor scope. The Barry Jenkins cinematic universe even collides with KiKi Layne (If Beale Street Could Talk) showing up alongside Moonlight star Sanders for a split-second, ultimately wasted albeit in an entirely different way than Vera Farmiga’s character. Playing a prostitute, The Departed star is seen only in a few scenes, but every moment she’s on screen there’s a feeling of mis-directed bewilderment akin to nearly the entirety of last year’s Mute. It all leads to a laughable ending that attempts to pull the rug out from under its audience while bombastically feigning a level of import towards what we’re meant to be engaged with on screen.

History has proven that great art can emerge from times of immense political strife and unrest. What history doesn’t often remember is the profusion of bad art that is quickly discarded. Unfortunately, Captive State seems destined for a forgettable life the latter pile. After convincingly selling a sci-fi world in Rise of the Planet of the Apes, with a driving momentum to boot, it’s a mystery how Wyatt seems wholly out of his element here. The groundwork is laid for a rich playground of political intrigue and sci-fi thrills, but Captive State is continually hobbled by acting more like a mouthpiece for the state we are in rather than a memorable genre outing with characters we can root for.