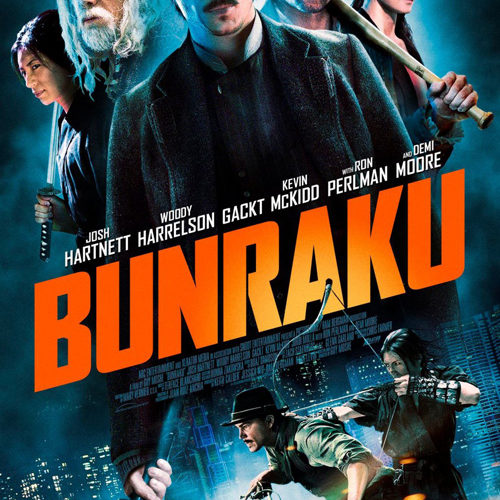 Bunraku is a western set within an ultra-stylized cartoon world without guns. It’s an inspired and attention-grabbing idea right off the bad. In execution, only some of that wonder makes it to the screen. However, what’s there makes for a mildly enjoyable, unique mess.

It’s all about two lone rangers: The Drifter (Josh Hartnett) and The Samurai (Gackt). They are both seeking revenge on the same man, Nicola (Ron Perlman), the powerful overlord who everyone fears. Gackt is adequate as The Samurai, while Hartnett is the true screen presence, offering appeal action-hero traits to his role. He’s tall, no longer boyish-looking and doesn’t take himself too seriously in the role. The whole ensemble understands the specific tone of the film, and Hartnett makes the most of playing around in a playful environment. The story is that of a traditional western. With that sensibility, director Guy Moshe works at a deliberate pace, sometimes leaving scenes a bit bloated. The film clocks in at a near-two hours. Throughout the film, there are small beats – or even characters, like Demi Moore‘s Alexandra, Nicola’s captive damsel – that could have been left on the cutting room floor. At 100 minutes, Bunraku could have been the full-on visual assault it so wants to be.

And while the first and final act are both lean and mean, it’s the middle act that hits a roadblock head on. The introduction sets up the world and the rules clearly, including the characters’ motivations and varying personas, ableit with the help sometimes distracting voice-over. Then, everything slows down. It’s plodding and never comes close to achieving the much-needed buildup for the final confrontation.

An odder part of the film is how little they take advantage of the R-rating, and yes, this is a minor nitpick. The film is surprisingly light in the violence department. There’s plenty of action, and yet so little blood. Why not push the violence in a heightened visual way like the rest of the world? It’s stuck in that uncanny valley between PG-13 and R.

Moshe take chances – even if his efforts don’t consistently succeed – and there’s something rare about that. If the final cut matched Moshe’s ambition, this could have been a wonderful film. As it stands, Bunraku is a narratively-flawed experiment that is worth seeing for its intentions, and the pieces of the film that do impress.

Bunraku is available on VOD on September 1st and hits theaters September 30th.