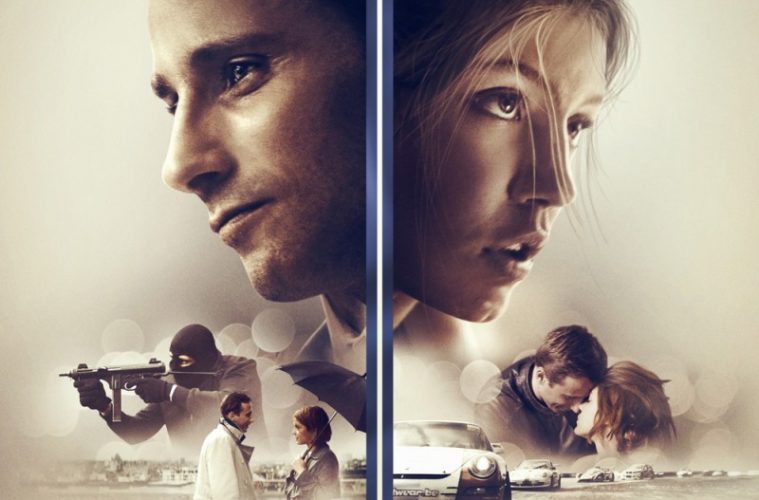 If it can, should a film lay its foundation on intertextuality? The question being: can you believe two people are in love because you are told, not because you see it? Because you know it’s happened before, not because it’s happening now? If you answer yes, then Racer and the Jailbird will shake and move you, leading you seductively by the hand through a series of romances and heartbreaks. Michaël R. Roskam’s latest finds the familiar premise of a heist film, with truth as a currency in bankruptcy and hopes of a dream getaway dashed against the pillars of human nature fused with trauma dictating otherwise. So we have robber and racer, lovers in trouble. If your answer to the above question is no, Racer and the Jailbird will leave you battered but hollow.

Gigi (Matthias Schoenaerts) is a criminal who poses as a business man in the car import-export business. Bibi (Adèle Exarchopoulos), yes their nicknames match, is a race car driver. One day, at the track, they meet and he asks her out. But first, he has to go away on ‘business,’ a jam in the cogs of their relationship that will only worsen with time. Still, she agrees on one condition: no flowers. So he comes back, and they court. And then the movie continues on. There’s one problem here: I never really see why they like each other, other than this intertextual convention of how it is supposed to work in this sort of film. The emotional crux, the greatest dilemma. You’re never free if you got someone you care about. You can’t turn and run anymore, without looking back. So, I know what I’m supposed to care about, so that I can worry about it when it starts to chip away. But with Bibi and Gigi, all I see from the beginning is chipping.

The film quickly spirals into situations of sadness, situated outside of distinct affect; this leaves a tableau of emotion perhaps untouched by authenticity of feeling. Instead we are shown concepts of heartbreak with the odd sensation of observation or cold speculation; ‘wouldn’t this be sad if…?’ This quality of observation does not arise from a lexical level, where unflinching but shaking, engaged compositions again tell us of the raw humanity on display. Instead, it derives from this lack of development between the leads which, for a movie over 2 hours, seems criminal.

Racer and the Jailbird is split into three distinct acts, divided by title cards. The first moves cooly, dripping with sweat and ideals. The second tries its best to balance the mounting sense of heartbreak with some hope, but the third is just brutalizing and dour. In fact, it splits off into some sort of pulp, mistaking unimaginable sadness for something profound. Splitting the film into three titled acts (Gigi, Bibi, etc) is hypothetically interesting if you stay rooted to that character in every scene, ala The Affair. Yet each segment has enough switching between both characters that this perspective doesn’t matter quite as much as it should to justify this interruption.

A moment that sings nicely is a reversal of usual gender dynamics in a driving sequence. Where in countless films before a woman sits locked to her seat, flabbergasted that a man could step on the pedal and steer properly! Here we find Bibi gunning her car down back roads in the countryside while a visibly uncomfortable Gigi tells her to slow down. This scene has a nice layer of intimidation, as Bibi is pressing him about ideals of truth. In this film, lack of truth is the central point of anger. It’s a fine concept to discuss both evasion of law and the structural integrity of a relationship, but it is not ever really pressed.

Just as reversing gender stereotypes isn’t pressed either, for the wonderful scene of Bibi intimidating Gigi is contrasted by multiple scenes of her being asked if she has a boyfriend as the only topic of conversation directed toward her. ‘It’s a hard world for woman’ doesn’t really work as a justification, either. So too, a sex scene where we only focus on her face is balanced by the overarching idea that considering giving up one’s profession in order to “have something” is postured by a stereotypical set of binding gender roles.

A gripping highway heist sequence and two affecting lead performances are surrounded by a film that mistakes the knowledge of sadness for its authentication. Racer and the Jailbird’s final shot is interesting and faintly resonant, but ends in a very unsatisfying way. These echoes of images — being chased, jumping fences, cars whirring, dogs barking — amount to little more than statement about closed system narratives instead of what I believe they were intended for: the echoes of trauma and the life we can’t seem to escape. But knowing isn’t feeling, and seeing isn’t caring. At one point, Bibi says to Gigi, “I feel like I don’t know.” That about sums it up.

Racer and the Jailbird enters a limited release on Friday, May 11.