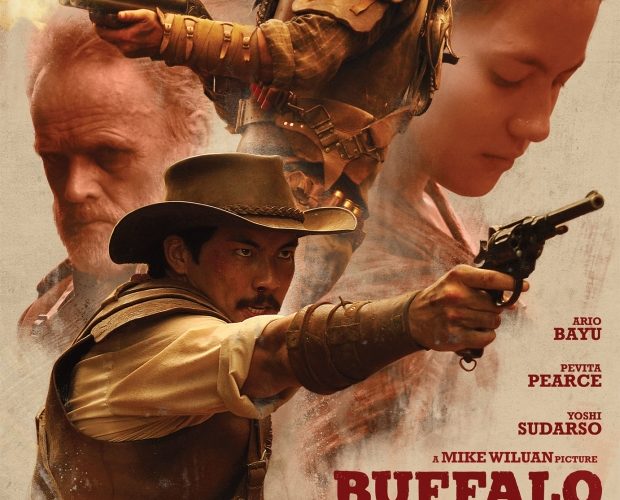 Review: ‘Buffalo Boys’ is a Rousing, Unwieldy Indonesian Riff on the Spaghetti Western

It may be helpful to contextualize Buffalo Boys through the lens of colonization. This Indonesian riff on the Spaghetti Western is given cultural specificity through its contemplation on the violent process of living as a native in a now-colonized land, as much as it is by the martial arts flair which distinguishes it from Western cinema practices. This study—and the medium by which it is presented—also explains the film’s jarring oscillations in tone, which leads to a nasty comedown from its often silly presentation. This means that a bout of brotherly banter is juxtaposed by depictions of genocide and pillaging, or that the adrenaline form a rip-roaring action sequence is cut short by a grotesque assault. The result of this concoction is a rousing action picture, sometimes misguided, even offensive, but never dull.

The film follows two competitive but loving brothers traveling across Indonesia with their uncle. When they save a band of villagers from a caravan assault, they soon learn a Dutch colonizer controls the area, and happens to be the very same man who murdered their father years before. Here is a perfect cinematic coincidence, one that allows Buffalo Boys to create a Magnificent Seven-esque noble cause for its small band of outlaws, along with the requisite revenge plotting for personal affect. That’s about it, and director Mike Wiluan unabashedly embraces trashy Western archetypes and act structures, punctuated by a few roaring action scenes.

While Buffalo Boys is no The Night Comes for Us (a film that neared the peak of crazed, modern action cinema), there is still a frenetic energy to the sequences of combat that gives it a pulse. Though it often leans toward the Western side of gunslinging, there are flourishes of martial arts—sometimes almost silat, but not quite—and the crazed, slow-motion bodily acrobatics that accompany it to make it feel culturally distinct. The Western elements then become interesting appropriation, as if the traits of the oppressor are used against them. Yet within these gunslinging beats, there are fascinating juxtapositions of cultural transitions; from pistols to blades, and from a gunshot to a kick. Along this line, the brothers switch between languages: Indonesian to English, English to Chinese.

These elements are where Buffalo Boys really comes alive. These interplays and byways make for a crackling atmosphere, where cultural specificity is intersected with globalization. However, the systematic horror of these cross-cultural encounters are also present. Indeed, while the swapping from a gun to a dagger signals differing cinematic and cultural action practices in stimulating ways, it also suggests the turmoil that demands the use of these weapons. The central antagonist—the Dutch colonizer—is a rapist and a murderer. His presence, looming above the Indonesian people with an iron fist, signifies the insidious and abusive side of multi-cultural interaction when one side has an agenda. While the Dutch abusing and colonizing the Indonesian is a culturally specific focus for this film, the images and feelings it conjures speaks to broader historical atrocities as well.

This balance of exciting intersections and somber realities speaks to the sensation of Buffalo Boys as a whole. It has a distinct ideological purpose, though its means of displaying these ideas are often silly and ugly in turns, with a distinct bend toward the latter in its second half. Indeed, Buffalo Boys hits a sordid hangover after a raucous beginning. Here, the film stumbles, doubling down a bit too hard on the urge to further demonize a man who we already know is a vicious colonizer and murderer. This leads to scenes that are perhaps historically true and brutally honest, but are done so in a way that only seems to bolster the desire for revenge for the male characters, at the expense of the women.

This dip means that the second half of Buffalo Boys leads shakily into its climax. With all the pieces now in order, a bit haphazardly but satisfactorily enough, Wiluan gets back to the bruising action and kinetic energy that has set the stage at the film’s open, and has been sorely missed in its middle. At this climax, Buffalo Boys depicts its namesake, brings out some ridiculously-sized firearms, and stages a couple of giddily entertaining fight scenes before wrapping things up. This finale, like the rest, is fun if by-the-numbers. Coupled with the misguided but ideologically sound depiction of systemic abuse, Buffalo Boys is a messy, interesting, fun romp in cross-cultural interplay.