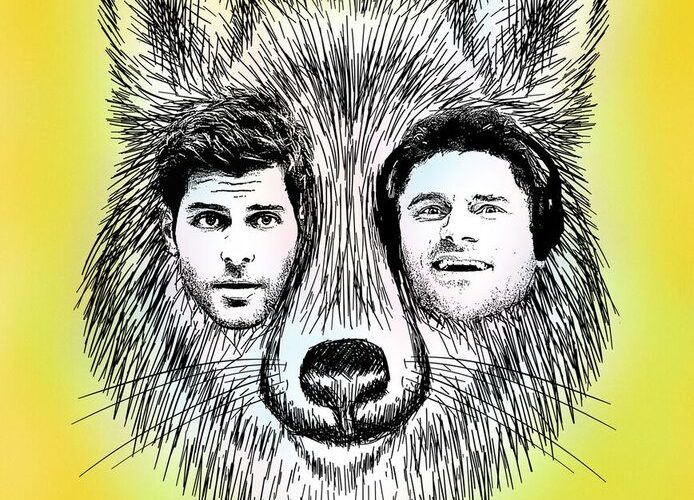 When Flula Borg showed up in the Pitch Perfect 2 trailer I found myself smiling at his success. It was a cameo keen to capitalize on his YouTube DJ fame and unabashedly broken English Chatty Cathy vibe, but it was studio film exposure nonetheless. This cemented the fact that I had become a fan of this crazy German and as such jumped at the chance to see how he’d do as co-lead and co-writer of his own vehicle. Just as the prospect interested me, however, it’ll surely infuriate others. Flula’s shtick is not universally palatable and Buddymoon does sink or swim depending on your enjoyment of it. But that’s okay. This thing was shot in ten days amongst friends. It’s not trying to take the world by storm. The comedy stars Flula and real life BFF4ever (I don’t know if this is totally true or they’re just really close friends, but it’s fun to pretend) David Giuntoli as amped-up versions of themselves. The former transfers his over-the-top YouTube persona to the big screen verbatim while the latter flips his current Grimm success into that of a former child actor whose star has all but faded away. Movie David finally thinks things were turning around, though, with a prospective part in a Lewis and Clark adaptation and impending nuptials with love Frankie (Jeanne Syquia). Maybe he’d be able to laugh rather than scowl when people remembered the robot co-star he shared screen-time with as a child on “Little Geniuses”. Life was good again, but good doesn’t last forever.

Frankie calls off the wedding, David falls into a state of depression, and Flula does Flula to cheer his buddy up. It’s here when he learns the groom-that-would-have-been never canceled his romantic honeymoon hike through Oregon and pitches the idea that they should possibly do it together. Flula will be David’s everything to take his mind off reality and its tragic revelations. He will even force him into forgetting that Lewis and Clark job is still on the table because the anxiety and stress of not knowing is simply too much. They will go into the wilderness, act like fools, get drunk, and record new sounds for Flula’s end credits opus. Their friendship will be tested and new encounters will be made. They are Honey Buddies for life. You will either read this brief synopsis and embrace the random hilarity you know will ensue or roll your eyes in the knowledge that there will not be an actual plot. Buddymoon is very transparent in this way: if you don’t like the trailer, stay away. It’s not going to be for you and I know this because Flula, David, and director Alex Simmons improvised the entire thing off a color-coded outline with two cameras to double their coverage and natural Oregonian light that stayed bright until 8:00pm. This is shoestring stuff wherein the filmmakers went out and saw what stuck. They riffed, laughed, and probably fell flat on their faces often because being your uncensored self for the camera will do that. We’re talking pure, unadulterated insanity.

I won’t lie and say I wasn’t looking up at the sky dumbfounded as much as I was laughing at their antics — it’s hit and miss, but endearingly so. David is down in the dumps trying his best to overcome the memories of Frankie that Simmons cuts in and Flula obviously sees his pain. To a point the German is being obnoxious to be obnoxious, but he does it to also make his friend laugh. His awkward tick of expressively second-guessing himself after saying something and his ability to run headfirst into impossibly convoluted faux language/cultural misunderstandings is genius, his comedic timing impeccable. Giuntoli supplies the perfect straight man to counter this loose cannon, complete with a poignant moment of absolute frustration you’re surprised didn’t happen sooner.

The two are great together and a couple cameos from Brian T. Finney as a paranoid ‘shroom grower and Claire Coffee as David’s dream girl — someone who doesn’t automatically recognize him from the show that’s become the bane of his existence — Polly work well with the tone Simmons sets. It’s juxtaposed with Giuntoli reading from William Clark’s diary as narration, each passage carefully chosen to illustrate what’s happening onscreen. Hearing that scholarly voice speak about Meriwether Lewis collecting samples for scientific purposes while Flula blows into tree holes next to a boom mic that’s virtually an extension of his arm is impeccable. If it weren’t for the reality that Buddymoon is paper-thin beyond ad-libbed sketches and off-the-cuff weirdness, it could be a cult favorite rather than fan curio.

In the end that’s what it really is. Giuntoli and Simmons do very good work to help make the film a successful comedy worth a look, but they can’t help being overshadowed by Flula’s larger-than-life personality. Those coming in with an established interest in the DJ will have a blast and those stumbling upon it with the sensibilities necessary to fall in love with him will quickly go online to discover more. As for the rest, Buddymoon will probably be 80 minutes they’ll never get back. I get it. I’ve seen many films that put me in that same mood. And just as friends of mine who love those clunkers pity my inability to let them tear down my defenses, I’ll pity those for whom Flula doesn’t entertain.