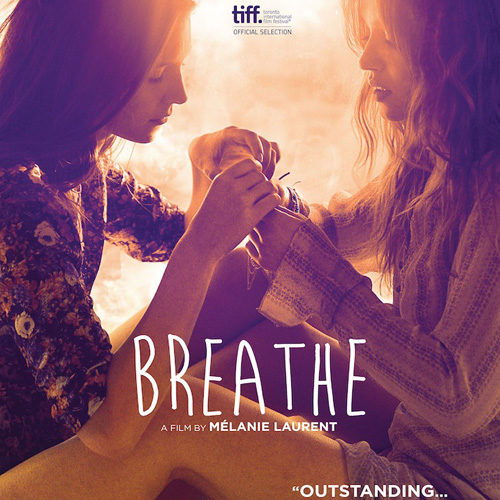 In many ways, a friendship is more difficult to navigate or justify than a romantic relationship. Romance is a singular event, confined to a single person at a single time. Friendship is something that you share with many people, never restricting yourself to a single friend and often having a group of friends who interact in an egalitarian fashion. A romance is a socially understood necessity, and thus the struggles necessary to keep it alive and the impulse to accept abuse as a result of it are well understood and discussed. A friendship seems to be a much more replaceable, much less special. When you use the same nomenclature to describe a connection with many people, the superiority of one might be hard to grasp. Yet, while we accept that love may not last forever, and in many cases does not, the idea of a friendship that doesn’t last forever often hits harder than any breakup.

Breathe, the newest film by director Mélanie Laurent (who most will know as the actress from Inglourious Basterds and Beginners) brings the special arena of heartache and confusion of a truly singular friendship to life. Charlie (a wide-eyed Joséphine Japy) is an average high school student, very much comfortable being an anonymous cog in the mechanism that is her circle of friends. When the worldly Sarah (Lou de Laâge) arrives at school and begins courting Charlie’s friendship, however, things begin to change. Suddenly Charlie is the focus of something – Sarah’s attention and favor – and diving into life with more vigor. Sarah gives her a drive, a verve that she did not have before, and consumes all of her time and energy.

From this starting point, Breathe could move in any number of directions. Jealousy could corrode their relationship once Sarah begins climbing the social ladder or becoming too close with Charlie’s family. Sarah could pull away when she feels to smothered by Charlie’s obvious affection and dependence. Lies could be revealed, secrets divulged and forged into weapons. A romance could bloom and either consume them both of just bring sorrow to one. Any or all of these could come into play, but the brilliance of this film is the way that it acknowledges the living nature of a friendship, the organic-yet-chaotic way that these acts come to play.

Like a jazz duet both Charlie and Sarah play their notes, sometimes in harmony, sometimes discordantly, but always with a firm knowledge of what the other is doing. Laurent, who co-wrote the script with Julien Lambroschini, applies a beautifully calibrated directorial style to the telling of this tale, measuring realism and immediacy against the kind of beautiful and dreamlike moments that can make a simple day spent with a friend feel like something almost ethereally perfect. Scenes in this film manage to be breathtakingly gorgeous without ever feeling out of place or superfluous.

Both actresses each strike their own balance and bring real feeling to two characters who, from the outside, could feel rote or preordained. Each girl has pieces of the other within her, each holding the same ingredients in different quantities, each deploying similar skills for different ends. The curdling of their affection for one another is seemingly written in the stars, but the means by which it withers and the ways in which it’s death-throes cause destruction and pain are painful to behold. Even more painful to behold is the isolation this disharmony breeds, because who could ever truly understand that this much harm could come from something as common and universally felt as a friendship?

There is a reality here, though it might be more accurate to say that there is an emotional truth. Drama is had, to be sure, but the root of the drama is always watered from a font of real feeling and understanding of the same.

There are, perhaps, some things which could be said to detract from the power of the film. The parallel drawn between the girls’ friendship and Charlie’s parents’ relationship are a bit easy to mark as they occur. Similarly, Charlie attends one of those rare high schools where lessons observed by students, even in math class, have a perfect resonance with the story at hand. That being said, thanks to superb direction and enveloping performances, the examination of the unknowable and undeniable power and pain of a broken friendship on display in Breathe is truly something to behold.

Breathe is now in limited release.