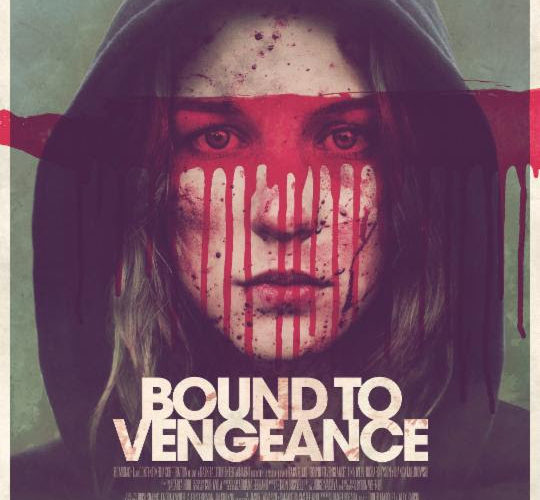 Rape-revenge thrillers aren’t new to cinema, with such titles as Last House on the Left (the original, not the remake), I Spit On Your Grave (again, the original, not the remake), and Ms. 45 unleashing brutal comeuppance upon deserving perpetrators. Whether viewers find them horrifying, empowering, or exploitative speaks to the level of violence associated with the acts – besides the obvious feminist bent, one question they seek to answer is how far one can go before completely losing humanity. When it comes to answering this question intelligently, and with respect for the victims, filmmakers tread a very thin line where the risk could result in either daring commentary or a misogynist horror show.

In Bound to Vengeance, director José Manuel Cravioto’s addition to this sub-genre, the kidnapped Eve (Tina Ivlev) is definitely justified in her actions. Within moments of her introduction, she turns the tables on her captor Phil (Richard Tyson) – an unassuming lout whose creepy calling card involves blaring the Scorpions ballad “Wind of Change” – by bludgeoning him with a loose brick and shackling him in her filthy basement prison. Before she can deliver a fatal blow, however, he reveals there are others like her held in various locations and, without him, they’re doomed. Eve then fashions a crude dog catcher’s pole and, at gunpoint, forces Phil to transport her to the sites in order to free the remaining girls. As they drive into the night, Eve begins to realize her mission might not work out as planned.

The ensuing deaths are numerous and the blood plentiful, but the film demonstrates admirable restraint by never showing the sexual assaults inflicted on Eve and the others. Instead, it employs stylistic shock cuts and audio-flashbacks meant to recall the horrors to which the women were subjected – it’s understood here that we don’t need to see the rapes in order to believe they happened. There’s also the use of home movies depicting Eve during happier times, a motif that, in its execution, manages to degrade the suspense – that it constantly cuts back and forth between the footage and the carnage hints all too insistently that Eve’s boyfriend Ronnie (Kristoffer Kjornes) may have something to do with her current situation.

Unfortunately, some bizarre choices diminish what little progress the gritty indie makes, mainly the gratuitous death of one girl who, after being freed, promptly impales herself. If the moment was meant as a joke, it’s not funny nor profound, only intensely cruel. The troublesome aspects don’t end there as Eve’s portrayal teeters toward unsympathetic. While she’s deemed a hero by fellow victim, Lea (Bianca Malinowski), the film actively questions Eve’s competence, often persecuting her for allowing Phil to stay alive and torment her with his head games. As a result, the tone veers in and out of victim-blaming territory by suggesting the protagonist should have known better than to trust a man – any man – in the first place.

While the film shows ambition with numerous handsomely shot sequences (a final slow-motion bit ended the experience on a high note), adept editing, and a strong performance from Ivlev, its message remains muddled at best as it tries, and fails, to effectively comment on the consequences of rape culture.

Bound to Vengeance is now in limited release and available on VOD.