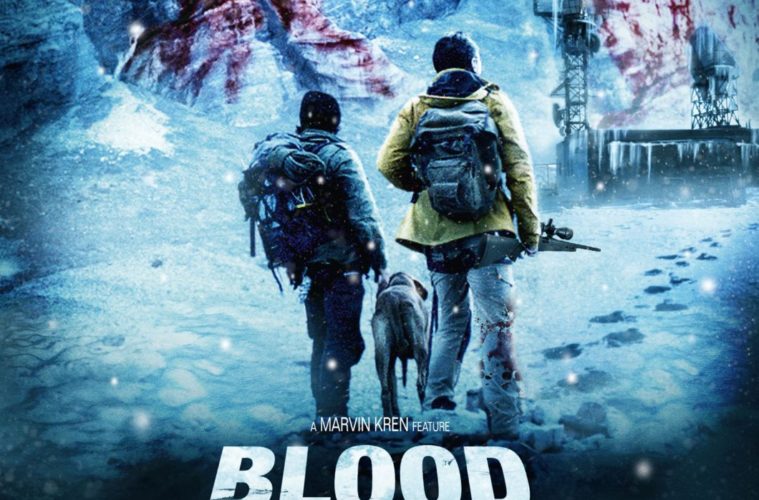 Blood Glacier boldly announces itself before running through a list of familiar horror movie tropes. A team of scientists led by the burly and morose Janek (Gerhard Liebmann) are responsible for studying the few remaining glaciers not yet decimated by global warming. The discovery of a blood soaked glacier sparks a gory chain of events across the German Alps.

The bleeding monolith is an exciting image in a pulpy sort of way and paired with early expansive views of the scenery, Blood Glacier lays down a decent foundation for itself. Janek’s faithful dog, Tinni, is another compelling, if familiar, genre element and the camera roves excitingly across the ground along the canine towards inevitable doom.

This relentless sprint towards the creature-feature main attraction is the first of the film’s many shortcomings. Director Marvin Kren stages a series of unfortunate events with minimal emphasis, reducing the following moments to standard horror movie procedure: Tinni gets injured offscreen by some “rabid” creature, human blood mixes with the substance on the glacier, and hybrid mutants begin to attack the desolate station.

The answer behind these grisly happenings is an equally familiar albeit biologically wacky premise. The organism on the glacier has attached itself to the host cells in the gut of an animal’s carcass creating the possibility of infinite hybrids eager to spring forth and munch on people. Blood Glacier is desperate to elaborate on it’s pseudo-Cronenberg’s The Fly/pseudo-Carpenter’s The Thing concept. The female scientist Birte, after walking us through a diagram of the eminent monsters, determines it is “the most important discovery…ever.”

It’s a disingenuous claim considering the remaining film rarely offers anything but brief glimpses at it’s array of horrors. Blood Glacier, with it’s mostly practically created monsters, wastes an opportunity to distinguish itself from the many CG-dependent horror titles that saturate cinemas. The irony is that sustainable views of the monsters wouldn’t push Kren’s film any further into camp territory. The moment a nameless blond in short shorts runs into the film, with no introduction, we’re already far into the realm of camp.

Parallel to the action at the station is a B-plot line with B-thrills to an exceedingly B-picture. Tanja (Edita Malovcic), Janek’s former lover and the reason for his current standoffishness and bouts with the bottle, leads an expedition of Ministry officials towards the station. She and Janek communicate over walkie talkies and the emotional divide between them is made stronger by the vastness of the alps. It’s a mildly evocative and much needed character relationship that culminates, like everything else in Blood Glacier, in extreme ridiculousness.

Blood Glacier screened as part of Film Comment Selects and will be released by IFC Midnight. See a trailer above.