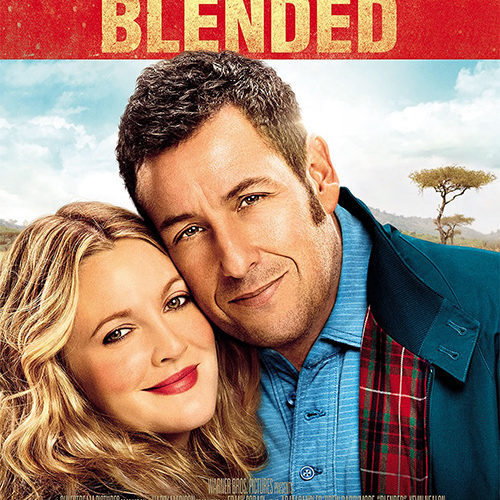 When an overused gag showed up for the third of about five times during Blended‘s runtime, the twenty-something college dude chowing down on his mall food court dinner next to me uttered to his buddy the telling phrase, “This movie’s off the hook.” Now, while this is a stunning and apt commentary on the state of America’s appetite for easy physical humor, it turns from educational thesis into farce when I tell you it was this gentleman’s second time saying it. He pretty much epitomized the demographic Hollywood targets with its clichéd family dramas masked by buffoonery. We have officially become a land of attention deficit: laughing harder the more times a joke is repeated and proclaiming our joy with a cycle of canned responses devoid of personality. I shouldn’t be surprised, though. The fact Adam Sandler keeps making money proves it’s exactly what the public wants. And can we really fault him for continuing a successful career just because he isn’t adding anything critically worthwhile? If America wants PG-style family humor dialed up just enough to earn a PG-13 rating and trick those who think the product might actually be risqué, someone has to give it to them. Critics are going to revile it, theatergoers will vocally oppose it, and yet weekend box office glory is almost certain. This is reality and it’s only getting worse. The Hollywood climate has changed due to the independent scene’s evolution and expansion and an Adam Sandler-starring, Frank Coraci-directing vehicle is safe, marketable, and above all else juvenile whether his shtick is appropriate behavior for playing a father or not.

Cowriter (with Clare Sera) Ivan Menchell is a Disney Channel guy who wrote and produced Jonas and Phil of the Future. Blended feels exactly like something that would air there or its ABC Family equivalent. It desperately tries to make us feel by sharing familial strife in a funny way for kids and parents to relate to despite being gratingly trite. We’re given the single mother (Drew Barrymore‘s Lauren) caring for two young boys (Braxton Beckham‘s Brendan and Kyle Red Silverstein‘s Tyler) while her cheating ex-husband (Joel McHale‘s Mark) rejoices each time his phone saves him from being a Dad. And opposite her is the widower father (Sandler’s Jim) of three girls (Bella Thorne‘s Hilary, Emma Fuhrmann‘s Espn, and Alyvia Alyn Lind‘s Lou), raising them like boys yet never once neglecting to put them first. Like clockwork, stereotype family one has everything stereotype family two needs and vice versa. So the filmmakers put matriarch and patriarch on a blind date destined to fail due to inexperience dating and unavoidable preconceptions only to then thrust their complete clans together so they can see how truly compassionate and wonderful each other is. And if that’s not enough, this main dynamic must be poorly mirrored twice for comic relief courtesy of Lauren’s friend/coworker Jen (Wendi McLendon-Covey) bailing on the man of her dreams because he has five kids and Eddy’s (Kevin Nealon) son Jake (Zak Henri) refusing to acknowledge his new, barely-older-than-he-is mother (Jessica Lowe‘s Ginger) as Mom. The crux of the plot is dumbed down to grade school proportions and they still spoon-feed it again and again on the periphery for added effect.

Still not enough? Let’s waste the hilarious Terry Crews as a faux African-accented wannabe Vegas singer randomly popping up to musically reinforce the “blended family theme” more. It’s like bad subliminal messaging pretending to be a joke while providing the screenwriters another way to bash us over the head yelling, “Get it now?!” We got it during the second scene between Barrymore and Sandler where they possess the gender-specific wisdom the other needs before discovering they own the same minivan. Kismet anyone? They also take their coffee black with sugar and have an affinity for The Wizard of Oz. Whoa. As though that’s supposed to be as unbelievable as them unknowingly knowing the two parts of a broken couple no longer using the African safari tickets they buy to give their kids a memorable spring break. I’d like to applaud Menchell and Sera’s attempt at injecting relevant, heavy subject matter into an Adam Sandler vehicle except for the fact they trivialize the most emotional truth of all for one last laugh. I’m not ruining anything by saying these two eventually kiss—if you didn’t guess that inevitability you’re too far-gone anyway. The beauty of what happens, though, is that Sandler’s Jim stops the first try because he cannot ignore the guilt of “cheating” on the woman he loved since age thirteen. He says, “I can’t” before looking into the distance with an “I’m sorry” to his wife’s ghost after Lauren leaves. It’s an effective moment to be cherished when the kiss does occur, but the screenwriters ruin it by having Lauren flippantly mock “I can’t” while laughing it off as payback.

But that’s the film in a nutshell: a movie too afraid to use real emotion or accept its audience is smart enough to read between the lines. Its attempt to comment on the twenty-first century family only ends up belittling it with Dick’s sponsorship, Lowe’s shimmying boobs, Shaquille O’Neal‘s out-of-place supporting role, Dale Steyn‘s excruciating cameo, and a desire to subvert earned drama with poorly timed gags culminating in Barrymore screaming (she screams a lot). There’s only one authentic portrayal of unequivocal love; one instance of tugging heartstrings not destroyed by the humor of smacking a sleeping boy’s head into the wall a seventh time. If Blended deserves any merit it’s courtesy of Emma Fuhrmann‘s performance believing her mother remains invisibly by her side always—the sole bit of honest complexity left intact by film’s end.

Blended opens on Friday, May 23rd.