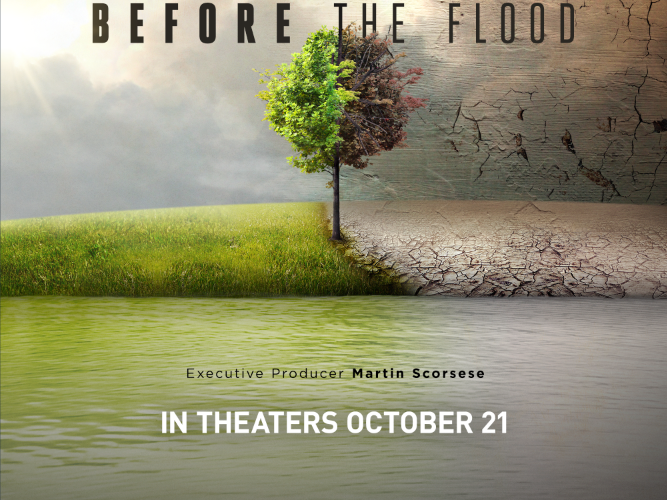 [Review] Before The Flood

In so many ways, Before The Flood, directed by Fisher Stevens, is like any climate change documentary released in recent years, save one facet: Leonardo DiCaprio. Sure, Leo’s been a climate activist for most of his adult life — even producing and narrating the under-seen climate doc The 11th Hour in 2007 — but here he is, front and center, from beginning to end. His general likability and genuine passion for the subject alone makes the piece worth watching.

We follow the movie star as he spans the globe, confronting the effects head-on. In the Canadian Arctic on Baffin Island, he stands with a local fisherman named Jake Awa and a scientist named Dr. Enric Sala, who explains that “in 2040, you will be able to sail over the North Pole.” DiCaprio speaks to Anote Tong, President of Kirbati, who lays out the not-so-long term plan of migration for some of his people from the island, which is literally being swallowed up by the rising sea. With the brutal narration of an ecologist, he observes one of the many coral reefs that are dying, if not already dead, thanks to carbon emissions.

Activists fighting against the production of palm oil, which is burning rainforests to the ground, address both the obvious corporate connections and the more complicated fact that this ingredient is in most of the food available at your local supermarket.

It all may feel somewhat familiar, and that’s alright. These docu-style gut-checks remain necessary. Framed around DiCaprio’s own words while speaking in front of the United Nations, the film does well in personalizing these eco-tragedies too many of us gloss over in the everyday social media bundle. Steven’s pacing between investigative journalism, graphics-heavy science and talking heads guilt-tripping viewers makes for a smooth 90-minute experience, if not a particularly radical one.

One of the most interesting things when watching Before The Flood is noting how the tone has changed in reference to climate change in just a decade. In Al Gore’s 2004 Oscar-winning documentary An Inconvenient Truth, it was one of warning. Here, the message is one of inevitability. About an hour into Steven’s doc, Elon Musk puts it plainly: “We’re unavoidably headed to some level of harm. The sooner we can take action, the less harm will result.”

DiCaprio himself acknowledges that while Americans should, must, adjust their lifestyle to combat this coming harm, they most likely will not. He admits that he, himself, most likely has a larger carbon footprint than most people, going so far as to question what exactly he’s trying to do. As for coal, it remains a cheap option in a time in which many developing countries are hoping to build toward a quality of life that most Americans enjoy. Unfortunately, that means more fossil fuels. Unless, of course, there’s a change. When pressed on what makes the 2015 Paris Climate Summit different than all of the summits that have come before, Secretary of State John Kerry admits that the now-drastic effects of climate change have a lot to do with it.

Even the last-ditch optimism and call to action — a common pivot in these kind of documentaries — comes with the caveat of “this is all happening, guys.” As Florida floods and California dries up, it’s certainly hard to ignore.

Before The Flood opens in limited theaters on October 21 and airs on National Geographic on October 30.