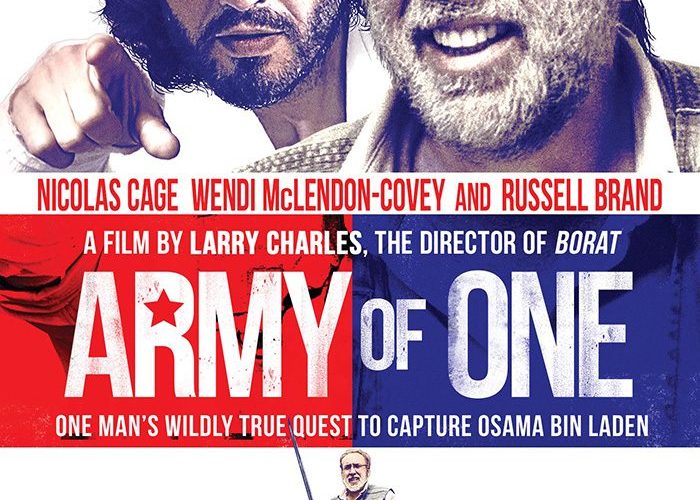 [Review] Army of One

To hear about Gary Faulkner is to know the meaning of the phrase “stranger than fiction.” This is a Chatty Cathy of a Colorado handyman who was visited by God one afternoon while receiving dialysis and given a mission. Of everyone on planet Earth, Gary was the one personally selected by his Lord and Savior to capture Osama Bin Laden in Pakistan and bring him to the United States for “justice and stuff.” Not the Marines. Not mercenaries or Al-Qaeda power struggles. No, the man for the job was Gary Brooks Faulkner. He isn’t crazy—at least not clinically diagnosed despite others trying—or in it for the publicity. He’s merely a concerned American proud of his awesome country and willing to do what the Big Boys can’t.

Enter screenwriters Rajiv Joseph and Scott Rothman and director Larry Charles to foster a comedic cast into embracing improvisation to put a not-as-fictitious-as-you’d-expect version of Faulkner’s eleven adventures to Pakistan onscreen as Army of One. And like the subject once suggested in an interview during the media frenzy surrounding his deportation after searching this foreign land with sword in-hand—all while hallucinating due to too many skipped dialysis treatments—there’s no better actor to portray him than Nicolas Cage considering he’s practically a spitting image (not really) of Con Air‘s Cameron Poe. Luckily for us Cage agreed, adopted Faulkner’s nails on a chalkboard speech patterns, and transformed himself into the most confidently pious, self-proclaimed know-it-all of a teddy bear the world’s ever seen. It’s a manic performance shifting from off-the-wall insanity to delusional optimism to tear-streaked fear of God’s wrath if he should fail to succeed. Every time we think we have a handle on Faulkner’s eccentricities he falls further down into the abyss of unpredictability. The character as portrayed by Cage decides to travel to Pakistan (a land-locked nation) by sailboat from San Diego, hang glide in from an Israeli mountaintop with a reassembled hang glider he idiotically sawed into pieces to store in suitcases, and attempt to board an international airline with sword and scabbard at his hip. And his incredulity when anyone questions his logic is forever earnest. Crazy ideas need to be executed by crazy people or else progress would be dead. He’s doing this for us.

It’s this attitude that surprisingly instills a heartwarming center—a sense of pure love between a man and his God that’s strong enough to push him into action. We can understand why he’s unemployed and homeless considering the majority of people he comes in contact with probably don’t believe “acquired taste” could ever be used to describe someone so abrasively weird, but everyone has the potential to find friendship and happiness. Gary has Pickles (Paul Scheer) and Roy (Will Sasso) to call friends, two guys who adore him even if part of them endure his rambling incoherency to laugh at him as much as with. He even has the lovely Marci Mitchell (Wendi McLendon-Covey) and her daughter Lizzie (Chenoa Morison) to care for him despite his obvious instability.

You can shake your head wondering how anyone could stand by his lunacy, but at the end of the day Gary is a man who will protect you to the ends of the Earth if given the chance. This is his motivation even if it’s warped along the way. The only person he could ever feasibly hurt with intent besides Bin Laden is himself. So while it’s easy to dismiss Marci as being crazier than him for continuing to open her door, you cannot deny the worry her love conjures when he’s gone and the elation in his safety when he returns. The law of averages says one of these days he won’t be coming back, so why not enjoy whatever time you have together while you do? I’m not surprised many have unjustly dismissed the film as not going crazy enough to match Cage’s performance. I won’t deny that Army of One drags at times courtesy of repetition, but there’s a reason the world surrounding Gary cannot devolve into the same depths of absurdity as him. This story isn’t necessarily a farce about the world as much as the unlikely heroes we’re too quick to ignore. Something about Faulkner’s willingness to put everything on the line to misguidedly protect those he loves from another 9/11 tragedy shows how he may be the sanest of us all. He has purpose (even if it derives from Russell Brand‘s hilariously sarcastic and often brimstone dark manifestation of God) and genuine motives. Who is he to reject God?

Similar to the sketch progressions of Charles’ collaborations with Sacha Baron Cohen (my hopes of a cameo as Bin Laden were dashed), much of the humor here comes from the transitions between fantasy and reality. We become swept away by Faulkner’s enthusiasm, pulling for him even when we know he cannot accomplish what he’s setting out to do. So watching him fail so profoundly only to instantly end up back on Marci’s couch in high-spirits despite a broken leg proves absolutely inspiring. Gary Faulkner’s ego is quite literally indestructible because God has told him the journey will be challenging. He could quit and live a happy life with Marci and Lizzie, but what would that say about his faith? Saving the world is bigger than personal joy. The filmmakers add some fun to the fringes with an unprofessional CIA duo consisting of Denis O’Hare and Rainn Wilson; a faux Columbian drug-lord, possible Mexican tourist, more than likely figment of Gary’s imagination played by Adrian Martinez; and a way too-trusting yet perfectly sympathetic doctor in Matthew Modine. Brand is suitably over-the-top as a disgruntled God losing patience because Gary is too and McLendon-Covey steals many scenes with her honest tenderness towards this man who treats her like no one else ever did. Michael Yurchak‘s narration gives it all a storybook feel (always self-aware of truth and elaboration) and the Pakistanis met supply a welcoming air of appreciation and brotherly love. If nothing else Charles and company should be commended for not condoning terrorist caricatures.

Army of One could stand to lose ten to fifteen minutes, but it isn’t one to be ignored because it’s direct-to-DVD. The biggest draw is watching Cage embrace a character with the unironic comedic flair we haven’t seen from him in quite some time, but it only works effectively if he’s able to balance the realization that Gary Faulkner isn’t a joke. He’s a dedicated servant of God who unfortunately suffers from an ailment that causes hallucinations to takeover much like with schizophrenia. His childlike innocence endears him to strangers as much as repels them, his charisma causes us to wish him well rather than shut him up. And our ability to appreciate this truth at the end instead of laughing Gary off is admirable.

Army of One is now available on VOD with a DVD/Blu-ray release scheduled for November 15th.