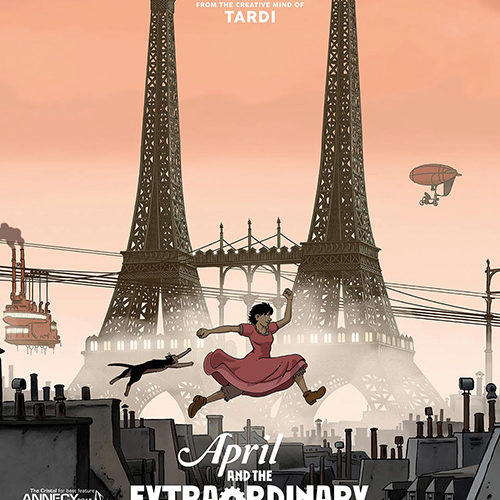 [Review] April and the Extraordinary World

Most writing on Christian Desmares and Franck Ekinci‘s April and the Extraordinary World speaks as though they’ve adapted one of revered Frenchman Jacques Tardi‘s graphic novels. This isn’t quite the case. What they’ve actually done is bring his unique “universe” to life with help from previous collaborator Benjamin Legrand (writer of Tardi’s Tueur de cafards) instead. Legrand and Ekinci crafted this alternate steampunk version of Paris as something inspired by the artist’s work rather than born from it. Tardi in turn helped by drawing original work later brought to life by Desmares’ animation team. The whole is therefore a culmination of its six-year production schedule populated by multiple creative minds working in tandem throughout. It may look familiar, but it’s very much brand new.

Their world is built on steam and coal because the best scientific minds have disappeared. Electricity wasn’t discovered and those left to stumble upon it are more or less indentured servants to their governments in a battle to control the woodland forests of Canada so their industrial machines may be sustained. The police don’t look for criminals — at least not criminals like we know them in our own reality. Fugitives in this Napoleonic France are chemists experimenting in secret who are wanted by those in power to pave the way towards the future as international leaders. One family (the Franklins) it seems is most coveted. You could say their actions catalyzed the current state of affairs and now appear to be the sole force capable of ending it. It was Gustave Franklin during Napoleon III’s reign that started things off in his lab after being tasked to create a “super soldier” serum meant to make the French military invincible. He wasn’t successful and instead only managed to give his animal test subjects the capacity for higher intelligence and speech — something President Louis wasn’t in the mood to applaud. Decades pass and his son and grandson (Jean Rochefort‘s Pops and Olivier Gourmet‘s Paul) each try and fail until we’re finally swept far enough into the future for young April (Marion Cotillard) to take up the mantle of family scientist. She’s in effect the last one by that time with Pops in hiding and parents Paul and Annette (Macha Grenon) presumed dead. All eyes now point her way.

By “all” I mean disgraced police inspector Pizoni (Bouli Lanners) still hoping to capture Pops so he may reclaim his career and the voices on the other end of rat spies outfitted by robotic technology (Benoît Brière‘s Rodrigue and Anne Coesens‘ Chimène). April is the former’s line on her grandfather and the latter’s on the serum, placing her and talking cat Darwin (Philippe Katerine) inside everyone’s crosshairs. She’s resourceful, though, so catching her in her lab or anywhere else is a tough task. Only a petty thief recruited by Pizoni named Julius (Marc-André Grondin) has the wherewithal to track her down. He isn’t a bad guy for doing so, just opportunistic. In fact, there really aren’t any “bad” guys per se. This world’s too complex for simplistic labels. This is what makes April and the Extraordinary World (translated as April and the Twisted World in the English subtitles) so intriguing for adults in the audience and maybe confounding for the children. Let’s be honest: while the animation is a delight for someone like me (Tardi’s style is transposed onscreen with immense detail and the environment is wonderfully dark and drab in its soot-covered atmosphere of pre-electric gloom) it will be an oppressive experience for youngsters used to brightly colored excitement. That says more about America’s shift into bombastic musicals and goofy characters than this film’s success, though, because Desmares and Ekinci have crafted a captivating story that transcends its medium. Animation should push boundaries and this aesthetic and revisionist plot do exactly that.

There are elements of Doctor Who in the reveal of who embodies the voices heard through rat mouthpieces — a whole other reality hidden beneath the one of April’s existence set to give everything that happened beforehand sense. Nothing occurs that isn’t meticulously exacting to the story’s trajectory whether it’s seemingly throwaway characters or expert deflections of truth where the pieces are supplied but the underlying machinations are still out of reach. You can see a relevant commentary at hand, too, in its environmental message that escapes its initial subtlety a bit too much once the climax sermonizes about the destructive and evil nature of mankind — but that’s just one part of a more imaginative whole delivering excitement and mystery to keep you glued to your seats. What’s really unfolding is larger than you can ever guess after Paul and Annette are struck by a confoundingly specific cloud of lightning that consumes them whole, but it reveals itself in due time so we can focus on each puzzle piece separately. Eventually everything will converge as the good intentions of some bare fruit while the power-hungry drive of others risks everything. It’s a somber trajectory with death, kidnapping, and imprisonment, but it’s also allowed moments of welcome levity to diffuse the tension. Darwin is a good source of the latter as his cat is full of life and sass. Pizoni supplies his fair share too for no other reason than him being a bumbling coward of pratfalls and victim of Pops’ lively wiles.

And at the center is a fallible heroine rife with doubt by Tardi’s own admission. April’s therefore an authentic depiction of a regular person thrust into extraordinary circumstances who rises to the occasion. She’s a character to admire for her intellect, ingenuity, awkwardness, and fly-off-the-handle temper. She isn’t a princess in search of a prince, but instead a scientist in search of answers. Anyone, no matter his/her gender, can see him/herself in her blue-collar nature caught within a universe where that work ethic means everything. April is a survivor and an optimist who deals with whatever comes her way in the knowledge that such events must be overcome to move on from them. She’s a hero through tenacity. Hers is a strength we each possess, big or small.