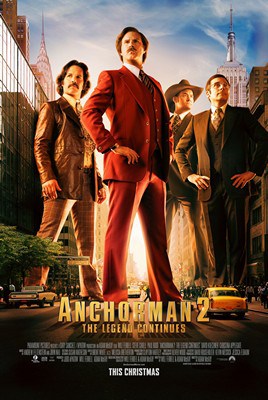 Yes, the rumors are true; the legend of Ron Burgundy continues, and if it’s not an unexpected journey, it not so unexpectedly utilizes some Journey songs along the road to victory. There’s certainly plenty of epic 80’s pop-rock to both commemorate and eulogize this titular titan of TV news and the era he and his cronies represent.

In many ways, Adam McKay’s long-coming sequel is just as absurd, corny and pleasingly durable as any of the familiar tunes it drags back up on stage. Will Ferrell steps back into the character in a way that suggests possession more than habitation, and he and McKay return to their creation with a sense of affection that makes all the difference.

Not quite on the same bizarrely enticing wavelength as the 2004 original, Anchorman 2: The Legend Continues still delivers all that its title implies and a heaping dose of belly laughs to boot. The end of the 1970’s finds Burgundy at the very top of his game, co-anchoring the news in New York with his wife Veronica Corningstone (Christina Applegate), but the new picture is quick to rob him of his status and send him spiraling once more into the rabbit-hole of his own hare-brained machismo. As soon as Veronica is offered—and accepts—the coveted nightly news slot (resulting in her hubby being canned), Ron retreats from her and his young son and heads back to San Diego where he disastrously—and hilariously—becomes a host at Sea World. Just as it looks like Burgundy will fold to misfortune (insert outrageous suicide attempt), a new opportunity appears in the form of a seedy Dylan Baker who wants Ron to join GNN, the first 24-hour news channel. Wrangling up his old crew—that includes soft-headed weatherman Brick (Steve Carell), closeted sportscaster Champ (David Koechner), and affable investigative journalist Brian (Paul Rudd)—Burgundy joins the nightshift under his cagey new boss, played by Meagan Good.

Although the plot has been hastily constructed to resemble a faux inspirational epic, it must be said that Anchorman 2 is actually about something and it handles the satirical angle as well as the outright surrealism it frequently indulges in. At the heart of this new saga is the genesis and birth of our current media saturation, and McKay none too subtly suggests that the preening, arrogant ignorance of stunted front-men like Burgundy have helped us arrive at this specific cultural milestone. That requires Ferrell to go full-boor this time, and his supporting players go right there with him. Many of these people were just dipping toes into celebrity waters when the first Anchorman released, and many are now stars in their own right. What this means is that everyone has enough experience and latitude to really make the more random jokes and scenes stick, while also being confident enough to ambitiously set out after a few they just can’t wrangle. So, yes, some sequences of Anchorman 2 are outright hilarious, and many more are brilliantly set-up and constructed, but just as many seem to slip right over the edge and threaten to drag the movie with them. Brick, for instance, has simply too many scenes, and even a similarly tuned love interest (Kristin Wig) can’t quite cover the fact Carell graduated from this one-note type the minute that Dinner With Schmucks was over. A sequence where he thinks the green-screen has eaten his legs is a sure-fire winner, but mostly he’s as loud and obnoxious as everyone who’s not Ron thinks he is.

There’s also a line frequently crossed in regards to Ron’s own slowly-ebbing sexism and stereotypical racism; yes, McKay is filtering it through the mind of a perennially clueless dolt, but that dinner scene with Good’s family is almost as painfully unfunny for the audience as it is for the relatives. When the film is focused on the cheap,” entertain-them-don’t-educate them” transformation that ushers in round-the-clock news coverage, it works splendidly as both commentary and as witty diatribe, but over the course of two hours there’s plenty of time for one-off, clunky jokes. For better or worse, Anchorman 2 is in its full glory when Ferrell goes off the rails and the film follows him into the swirl of blatantly idiotic randomness. There’s a scene involving the nursing of a shark, a hammy blindness subplot, and a nearly incomprehensible familial reconciliation, poking fun at the last ditch efforts of absentee movie daddies to make right. There’s a gladiator battle filled with epic cameos that puts the original film’s gang skirmish to shame and indulges so completely, you won’t even notice when the kitchen sink goes hurtling by.

When Anchorman 2 comes full circle, it’s also managed to lampoon the egregious excesses of cinematic sequelizing and what our larger-than-life movie icons mean to us. Ron Burgundy isn’t quite there in the halls of film Valhalla, but to our amusement, he doesn’t seem to notice and strides across the screen, laying waste to propriety and decency in equal measure. If there are times that Anchorman 2 thinks it’s The Hobbit, that may just be about right. Both films are so busy entertaining with their excesses they forget to get out of their own way.