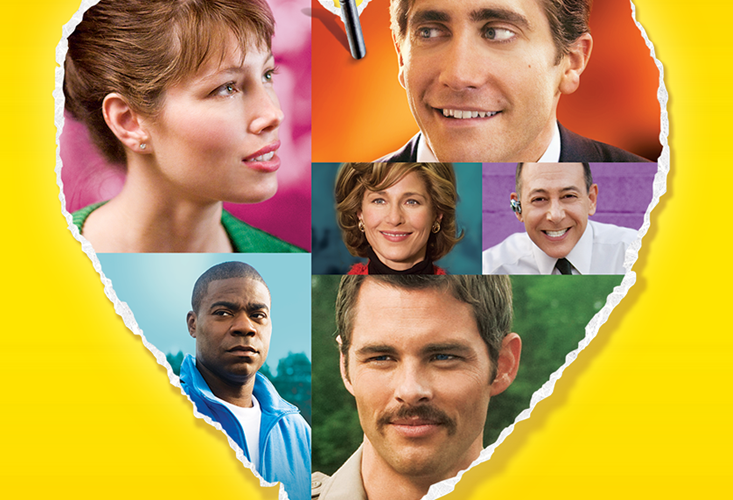 In early 2008, David O. Russell began production on a film called Nailed, a satire meant to dig into the hypocrisies of the American healthcare system. Two years and four production shut-downs later, O. Russell quit the movie, citing an unfinished key scene (in which star Jessica Biel gets a nail in the head) and a lack of money from the then-producer/now-bankrupt businessman David Bergstein. Five years later, it’s called Accidental Love, directed by Stephen Greene (an O. Russell-chosen pseudonym) and it’s been dumped on the VOD market by Millennium Entertainment.

Biel plays a small-town girl named Alice who is shot in the head by an errant nail gun right as her cop-boyfriend Scott (James Marsden, a highlight here) is proposing to her. At the hospital, the doctors (Bill Hader and Darlene Hunt) learn that Alice has no health insurance just as they’re about to take the nail out of her head. Deeming the accident “not an emergency right now,” they stop the operation. What follows is a fairly hysterical extended sequence in which the doctors, Scott, and Alice all discuss the different repercussions of Alice keeping the nail in her head for the foreseeable future. Ranging from slurred speech to a complete loss of sexual inhibitions, we watch all involved react to the immense possibilities in different ways. Enter her parents (Beverly D’Angelo and Steve Boles) who do not have the money to pay the $150,000 medical bill to have the nail removed. Not much later, Scott breaks up with Alice, citing how the nail in her head has made her crazy. The accident allows for what is mostly a hyper, gonzo mess with some inspired moments. Alice, seeking the aid of the government, enlists the help of young representative Howard Birdwell (Jake Gyllenhaal). You see, just as she’s introducing herself to Birdwell, Alice is bonked on the head, shifting her nail to make her sexually free. Careless, flexible sex occurs, both Alice and Howard agreeing to use each other to advance their respective political ambitions.

As written by Kristen Gore (Al’s daughter), Matthew Silverstein, Dave Jeser, and Greene (O. Russell), Accidental Love is at times wildly broad and at other times extremely pointed in its criticism of our government and the sins that spin its wheels. Sadly, as Alice takes on the government and begins to expertly “play the game,” the film gets bigger and loses its footing. This is never more clear than in the sloppy progression of the Birdwell character, who emerges as a brutally on-the-nose representation of bi-partisan corruption who fuels a rushed and silly finale. Catherine Keener does solid work as the villainous House WHIP, along with a slew of other actors, including James Brolin, Kirstie Alley, Kurt Fuller and Paul Reubens. Moments of abrasive ADR (additional dialogue-recording) and spotty color correction reflect a scattered editorial process, though they do not sink the proceedings.

Biel is surprisingly good here, and it’s a shame. This is a film that will most likely be quickly forgotten, along with the best performance the actress has ever given. And though it’s refreshing (and a bit sad) to see Tracy Morgan riffing, he occupies a portion of the narrative that feels woefully misplaced and under-served.

A bit more focused and this could be a something worth saving. Instead, it’s a about as slipshod as its new title.

Accidental Love is now available on VOD and hits theaters on March 20th.