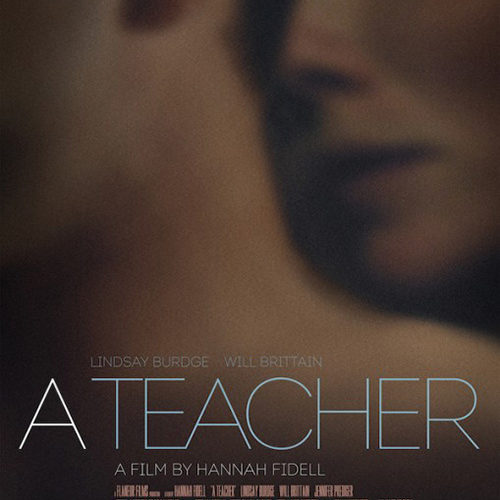 While we must assume the how of high school English teacher Diana Watts (Lindsay Burdge) and senior Eric Tull’s (Will Brittain) union, it isn’t hard to understand the why. For him lies that carnal fantasy of seducing a mature woman with authority and subverting that dynamic by wresting control of not only the relationship but her professional career too. And for her lies the escape from a reality of familial hardship she ran away from to Austin four years prior. Watching her clam up in response to talk about her dementia-ridden mother by estranged brother Hunter (Jonny Mars) before retreating into Eric’s teenage embrace for a sexual rendezvous helps explain her own fantasy of dangerous excitement far-removed from the adult responsibilities she’s all but pushed aside for present and complete physical satisfaction.

This is how writer/director Hannah Fidell drops us into her emotionally heavy drama A Teacher—devoid of the logistics in lieu of the insatiable connection they so obviously share. And on initial view, that yearning for sex seems to be all that keeps them coming back for more despite acknowledging the wrongness of their actions. It’s not like they’re going out to fancy dinners before heading to the theater. They call, text, and Facebook each other where and when they can meet and lose themselves in the other’s arms for however long they can due to his still living at home and her having a roommate, Sophia (Jennifer Prediger). Their romance can never be anything but private, the carefully stolen glances discretely shared in class as public as they dare push it.

While this isn’t necessarily a problem for Eric—who intriguingly is much more sympathetic to the intricacies of their relationship and far from ignorant to the consequences of their actions than you’d expect—this becomes a hard notion to fully process for Diana. Unable to tell Sophia about her beau, she must go through the motions of attending parties with guys her age drinking beer and making comments you’d expect to come out of someone Eric’s age and not theirs. The life she should be living is unattainable because the only person she can stand being alone with is the boy she shouldn’t. And perhaps this is exactly why she’s doing it. What better way to detach from reality than forcing oneself to hide in the shadows of a second life?

Such isolation isn’t easy, though, especially when the physical connection between them is so potent. Just one holiday Thanksgiving weekend away from each other sparks her into irresponsible acts like sending a topless photo to his phone when sexual longing trumps any intellectual thought about the myriad ways in which it could now be distributed around school. This is her first warning sign towards realizing she has gone too far; the second being a close call at getting found out while in Eric’s bed with a false sense of seclusion. Diana’s brain begins to finally take control, understanding that their love can wait until after graduation so the threat of legal action could be erased. Public ridicule and character defamation would remain, but at least the stress of skulking around would dissipate.

It’s at this point their difference in age truly appears—but maybe not how you’d expect. Brittain infuses Eric with the perfect amount of popular teen kid to be a likeable flirt who doesn’t linger on break-ups knowing there are so many other girls to choose from. By no means lessening his affection for Diana in the slightest, this reality simply shows the youthful inexperience in love that she doesn’t have the luxury of anymore. To her their bond has evolved well past the physical realm despite what she’d like to believe, rendering her backseat position of watching him continue being a high school senior to breed jealousy as longing turns to obsession. Infatuation ultimately trumps rationality in the decision to fight for a return to the tenuous façade of safety she voluntarily tore down.

Her erratic behavior culminates in an arresting long take of lust morphing into insecurity before taking one last stab at a love whose complete dismantling can do nothing but confuse and scare the boy in her bed unable to emotionally adjust to the mixed signals and weight of the situation. Burdge is reduced to a bundle of nerves and anxiety as the reality she so desperately tried to escape becomes visible again, creeping through the cracks of her psychological implosion. It’s a feral performance with all inhibitions thrown to the wind as her earlier willing sexuality is replaced by an emotional longing for more than carnal desire. We watch as this once very careful woman hiding her crime transforms into a creature devoid of control on a downward spiral towards absolute heartbreak.

There is intensity to their love that fluctuates from playful to sensual to serious, the third of which is impossible for Brittain’s Eric to comprehend no matter how invested he may be in the romance. Their connection is complicated and real—two things neither probably thought it would become—And when its pressure breaks them, the chasm separating their minds can only increase as the understanding of what they shared filters through the prisms of their wants and needs. Treading water for too long, the inevitable end arrives with disastrous effect. And while Eric can still simply get out of the water, Diana can’t help but be pulled deeper. Drowning and fighting for air at all costs, the pool suddenly drains in a nightmarish resolution risking to leave her gasping alone at its bottom.

A Teacher opens in limited release on Friday, September 6th.