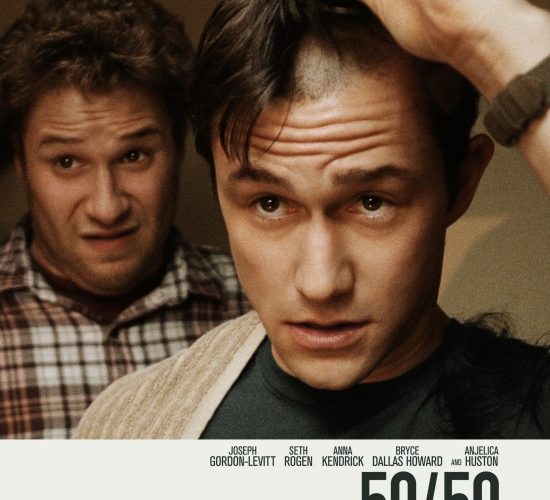 Jonathan Levine‘s 50/50 has all of the makings of a heartstring-tugging melodrama. That it ends up being a better-than-average blend of comedy and drama — certainly fragile territory when working with this sort of subject matter — is credit to Levine‘s tender, unflashy direction, but maybe even more so to Will Reiser‘s authentic work on the page. Indeed, Joseph Gordon-Levitt‘s 27-year-old Adam, an overly-ambitious radio worker, is based partially on Reiser‘s own experiences after he was diagnosed with cancer in his mid-twenties.

However partial the correlation between real life and fiction, the film is able to spike a note of real authenticity, even when scenes of Adam painfully opening up to his grad-school-level therapist (Anna Kendrick) and interspersed with the beefy, boorish, beer-guzzling antics of Seth Rogen‘s Kyle. (Interesting side note: Rogen is actually one of Reiser‘s closet friends in real life, and was one of the screenwriter’s most intimate companions during his grueling battle with the disease.)

The supporting cast is filled out with a variety of personalities. Bryce Dallas Howard (last seen in The Help; excellent in last year’s Hereafter) plays Adam’s girlfriend Rachael, who struggles to figure out whether or not she really wants to commit herself to Adam after he contracts the illness. Anjelica Huston, as Adam’s mother, bounces between levels of nervous maternal protection for her son, and a humorously candid approach towards dealing with doctors. And Philip Baker Hall and Matt Frewer are delightful as two of Adam’s fellow cancer patients.

As savvy as Reiser‘s script often is, at times it feels like it thinks it’s more clever than it actually is, which isn’t uncommon for films of this type. The Kyle character, for instance, is defined by little more than a bundle of movie and entertainment references — for him, making off-topic comparisons is a regular aspect of conversation. (Rogen, though, is able to add some emotional depth to the role.) The dialogue, too, is on-the-nose just as often as it is playfully insightful.

The role of Adam — understandably so — is written with the most nuance, and Gordon-Levitt nails every aspect of it. It’s his endearing portrayal, really, that represents the heart of the film. As emotional as the character’s journey is, much of the film goes by without moments of deep feeling — the oft-present soundtrack usually tells us how we’re supposed to feel — until Gordon-Levitt is able to take over in the closing sequences.

Anna Kendrick is also a pleasant surprise. I suppose I had no reason to expect otherwise, considering her recent, Oscar-nominated dip in Jason Reitman‘s Up in the Air, but Reitman wrote that character with such clarity that, in my mind, a handful of actresses could’ve delivered on a similar level. Here, however, Kendrick is given a somewhat hereditary role, and she’s able to elevate it beyond the written word. What could’ve been standard procedure becomes one of the film’s more moving and welcome attributes.

That sort of speaks to the film’s overall effect, too. The story’s trajectory is essentially a known commodity from the outset, but Reiser transcribes the wrenching journey with an uncommonly effective humor, and Levine wrestles worthy performances out of each and every cast member. It’s nothing other-worldly, nothing revolutionary — just well-executed, heartfelt storytelling. It also reminds us of Gordon-Levitt‘s admirable versatility. After the likes of Hesher and Inception, he’s now shifted back to that everyday persona, and he owns it.