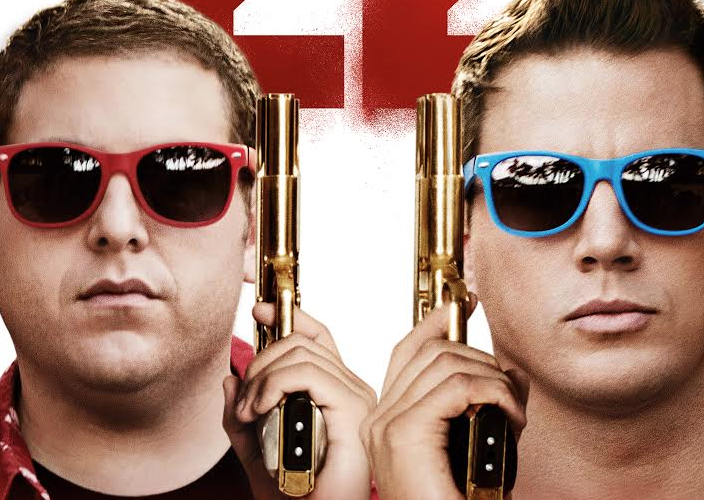 There’s not a single frame of Phil Lord and Chris Miller’s 22 Jump Street that isn’t acutely aware of its own status as a lazy, cash-grabbing sequel, but after about a half hour of this pleasingly genial and generously silly comedy, such attempts at self-deprecation just look phony. Despite the excessive references to awkward franchise practices — “We’ve doubled the budget, as if that would double the profit” — and studio interference- — “Do the exact same thing as last time, so everybody’s happy”– the truth about 22 Jump Street is that it’s anything but lazy and it takes the time to make us smile and laugh as it retrieves that admission price from our wallets.

As colorful, zany, and absurdly elastic as Lord/Miller’s animated output like Cloudy with a Chance of Meatballs and The LEGO Movie, this Jump Street hearkens back to classic comedy forebearers as much as it does the po’faced, raunchy traditions it pretends to belong to. There are several welcome callbacks to the Zucker Bros and Naked Gun, while the obviously askew pairing of leads Channing Tatum and Jonah Hill recall the jovial comic teams of yesteryear (I’m thinking Abbott and Costello, not Farley and Spade).  By the time we arrive at a beautifully launched gag involving a carnival-esque chase scene in front of the Benjamin Hill Center for Film Studies, it becomes clear that Lord and Miller are drawing from a very broad comedic canvas. Yes, the movie feels every bit the hot mess it pretends to be, but it’s also as shrewd and careful a live-action sequel as you’re likely to see this year. At the plot level, 22 Jump Street really is something of a remake of a remake, although spoof of a remake maybe closer to the truth. Undercover duo Schmidt and Jenko hid out in high school last time, but now they’ve moved on up to some new digs—you can guess the address—and are heading to college to root out the source of a new drug wreaking havoc on campus. The structure is identical to the last go-round, although the comedy and energy depend more on the individual strengths of Tatum and Hill this time. Together, their unlikely but potent chemistry bolsters some of the heart that Lord and Miller have snugly pinned below the farce, which is plastered throughout, from the opening titles to the delightfully over-the-top end credits.

The platonic bond that Schmidt and Jenko share takes all kinds of hits here, both within the bromantic structure of the movie (Jenko has a new football pal and Schmidt is lonely and jealous) and outside of it, where scenes like a couple’s therapy session play off the secretly pressed subtext of nearly every buddy cop film in existence. Sure, the movie is more clever than it seems, and its not without some slight emotional resonance on behalf of Tatum and Hill’s sincere portrait of friends growing apart through circumstance, but there’s no need to dress it up as something it isn’t, or berate it too much for simply being what it is; a very funny, goofy comedy. At the end of the day, it’s the zip and zing of the film’s clownish antics coupled with actors tapping into their own disarming comic timing that lights a fire under 22 Jump Street.

This Jump Street may not be a better movie than its predecessor, but it does make better use of its resources. That includes an on-point Ice Cube that doesn’t just steal every scene he’s in, but sometimes even the ones he’s not; a few gags are enlivened by the knowledge that once all this insanity goes down, there’s a grumpy Captain Dickson waiting to wag an eyebrow at it back at Jump Street. Along with a returning Nick Offerman, Ice Cube is the main delivery vehicle for all of the studio-minded dos-and-don’ts that come down from above, both men making the gimmick much funnier than it should be. There’s a fun cast on campus backing up Tatum and Hill, including Wyatt Russell (son of Kurt Russell and Goldie Hawn) as Zook, a college footballer whose relatively simple aims attract Jenko’s inner meathead. Russell has some of the same gee-whiz charm and charisma as his dad, adding zest in the same way that Amber Stevens as Hill’s art student love interest does, by juicing up the edges of the Jenko/Schmidt relational turmoil. There’s also Keith & Kenny Yang, twin flat-mates of Jenko and Schmidt, who are played by The Lucas Brothers. At first they seem like a special effect, so synchronized and precise are their shared conversations but no, they are as authentic as the hilarious atmosphere their shtick conjures.

Lord and Miller turned a toy commercial into a crowd-pleasing feature film with The LEGO Movie, while being upfront about the plastic consumerism at the heart of the concept. They’ve done something similar with 22 Jump Street, acknowledging that almost everything in the film has just been engineered as a vehicle for these two stars and a series of outrageous stunts and gags. By cutting through that pretense, the duo has made the possibility of a 23 Jump Street a welcome one.