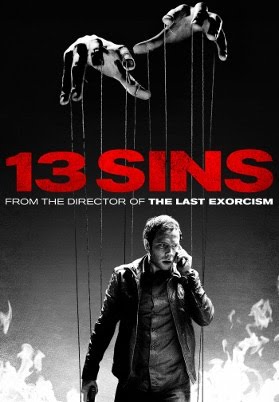 How far would you go for the “right” amount of money?

The very rich preying on the desperation of the poor is obviously not a new concept in fiction, but recent horror films have freshly gouged this particular social wound to varied effect. Last year we had the schlocky and mean-spirited Would You Rather? featuring a ghoulish dinner party emceed by sinister Jeffrey Coombs, and this spring has seen the release of two more low-budget thrillers focused on down-on-their-luck working stiffs compromising their morals and dignity for the patronage of wealthy, callous puppet-masters. You don’t have to look much further than this nasty trio to see the impact of our country’s recent economic woes, but their twitchy anger would play in any climate.

E.L. Katz’s unsettling geek-show Cheap Thrills, that pitted Pat Healy against Ethan Embry in a disturbing, degrading game of money-starved one-upmanship, may have launched from the gate first, but it’s actually Daniel Stamm’s 13 Sins that ends up being the better movie. Based off the 2006 Thai thriller 13 Beloved, Stamm’s film features the best balance of ragged social anger and nervous, pulpy thrills. It’s also the only one of the three that creates anything approximating real moral dread, the kind that soaks into the desperate and threatens to drown them. Stamm, who helmed the intriguing but ultimately frustrating The Last Exorcism, smoothly fashions a dark, psychological ride with 13 Sins, even if a similar third act stumble drains a little of its fearsome energy. The best aspect of Sins is its protagonist, Elliot Brindle, and the actor playing him, Mark Webber. Elliot is a good-hearted, decent guy who’s a bit of a pushover but hasn’t lost sight of what’s important in his life. The deck is stacked against Elliot from the very beginning, but his woes are not unheard of in our current version of the American dream. Engaged to the beautiful Shelby (Rutina Wesley), who’s pregnant with his child, Elliot is sinking into a financial quagmire. When our hapless hero is callously fired from his sales job, he also loses his health insurance, the lynchpin supporting his mentally disabled brother Michael (Devon Gray) and his crusty, racist father (Tom Bower).

Then, there’s a phone call, as if from heavenly providence, offering Elliot a sure chance at making $6 million dollars. The mysterious yet cheerful voice on the other side of the cell phone explains the rules of this outrageous opportunity; Elliot will play a “reality show” style game where he must complete 13 escalating tasks, receiving increasingly large amounts of money wired directly to his account each time he finishes one. The catch is that he must do all thirteen or he loses everything gained to that point, and it’s clear as early as the first squashed fly (for a cool $1,000 bucks) that the someone on the phone isn’t alone in this and that they are watching every move Elliot makes. An opening scene, involving a respected professor trading dirty limericks at an honorary dinner and then going nuts with the serving knife establishes the ghoulish humors at work in the game, and astute horror fans will see where Elliot’s crazy train is ultimately headed.

At first, the tasks are absurd and amusing and Weber plays them with the right confused determination, as he strives to make a random child cry or waltzes around in public with a corpse, ala Andrew McCarthy. This, of course, a horror movie, and Elliot’s tests grow more dangerous and morally questionable as he goes, eventually spiraling into the horrific and unthinkable, but by that point he’s all-in with a clandestine shadow organization that wants to see him make it to the bloody finish. Stamm doesn’t serve up a a cloistered, torturous experience, making us watch a character put through the wringer of compromise without any narrative impact, but pulls all of Elliot’s  relational connections into the story as it draws to its conclusion. Ron Perlman shows up as a hard-edged cop (he’s not going to be playing any other kind) chasing Elliot and working with a whacked-out conspiracy theorist (Taylor Pruitt Vance) to track down the originations of this sinister game. There are enough moving pieces to the story to keep it going through the more harrowing and disturbing bits and Stamm knows when to infuse dark humor into the scenario and when to milk it for uncomfortable thrills without going over the line or taking us out of the movie. One of the challenges of this particular sub-genre is balancing the moral subtext with the bizarre acts up on screen. Would You Rather? and Cheap Thrills never quite worked for me, because they never convinced me that the characters ever had any other choice than the path the filmmakers put in front of them, which required them to give in and complete the tasks so we could see the ridiculous aftermath. When a filmmaker is abusing their character without providing any dramatic reason for their discomfort, I have a hard time connecting with their implied outrage at the wealthy deviants pulling the strings. 13 Sins solves this issue by adopting the tone of a surrealist pulp thriller, where the hero faces forces well beyond his understanding and scope. Like Saw and The Game before it, Sins finds intriguing ways to have its cake and eat it too; when Elliot stops short of completing one epically hideous task—involving a taut wire across a stretch of road—he turns to see another participant ambling out of the bushes to finish his work. There’s no way to hide in this complex, Kafka-esque nightmare but Weber gives his character enough agency that we continue to struggle with him as he desperately looks for a way out of his financial troubles while still retaining his soul.

As a movie, 13 Sins comes awfully close to retaining its own twisted soul, but I’m not sure it really does get over that finish line. Stamm is a promising director whose most intriguing tactic thus far has been to inject organic, feeling characters into stylish, routine horror scenarios. The Pentacostal minister having a crisis of faith in Last Exorcism was a truly interesting and dynamic character, and just as the film brought his story to a reasonable and engaging close, it started up again only to tack on the cheesy, deflating ending it thought horror fans were looking for. 13 Sins does the same thing, giving us Elliot’s familial struggles with his brother and father and increasing his terror at what he’s being asked to do, but it gets lost in the twisting and turning of its demented mythology. The last few scenes just don’t feel like the proper conclusion to the story being told, instead a concession to the hypothetical masses who won’t take their sinister stories unless they’ve been pleasantly gift-wrapped with a nice bright, black-and-white bow. Stamm continues to grow as a force to watch in this genre, but here he’s made a Faustian deal of his own, and 13 Sins suffers because of that final paid debt to the cult of the mainstream.

13 Sins is now playing in theaters and available on VOD.