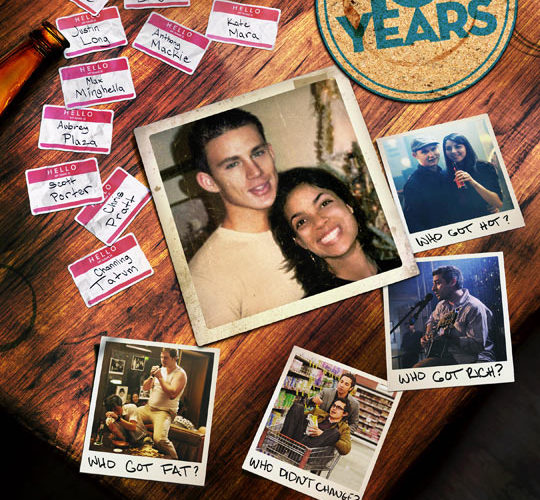 Awkward, fun, exciting, detestable, complicated, curious, interesting. I imagine the same words could be used to describe attending your own high school reunion. Unfortunately, none of these words can be used to describe 10 Years, written and directed by Jamie Linden. Though it be perfectly watchable, Linden’s film takes such a middle-of-the-road approach to all of its characters and their conflicts that it’s really tough to care about what’s going on.

The film opens on Jake (the very busy Channing Tatum), ostensibly the movie’s main character, and his girlfriend Jess, played by Tatum’s real life wife Jenna Dewan-Tatum, who are attending his 10-year high school reunion. On their way we are introduced to some old friends. We quickly learn what everyone was like in high school and how they’ve changed (or not) since. Many have agendas for attending this reunion and subplots abound. The main plot here is that Jake is considering proposing to his girlfriend but has unresolved feelings with his high-school flame Mary (Rosario Dawson). Mary is now married to Paul, a comatose Ron Livingston (he literally says less than ten words the entire film.) Dawson is also given next to nothing to do in the film. I could not gather a single character trait from Mary other than that she loved her father, who passed away while she was in high school.

This, we learn, becomes the catalyst for their eventual breakup. We learn nothing about her relationship with her father, who he was, or even what her and Jake’s relationship was like. It’s all pure information. This movie feels like someone took a template of their high school yearbook and just slavishly Xeroxed it into a screenplay without any added bit of humanity. It is, however, admittedly fun to see the casts’ old high-school photos (some real, some horribly Photo-shopped.) The supporting cast is mostly likable. Justin Long and Max Minghella are naturals at their bickering best friends going after the same girl: the former popular girl played by Lynn Collins. Anthony Mackie seems a bit too comfortable playing the black guy who lives up to the stereotype of the rambunctious black guy and Chris Pratt is reliable as always playing the good-hearted doofus who has a tendency to leave his wife (Ari Graynor) in the dust.

The main problem with 10 Years is that it masquerades as a film about adulthood and change and growing up but ultimately settles for cheap typical rom-com thrills by flattening out all of its characters, voiding them of any depth or empathy. I’m all for characters with simple motives but this one takes the cake for the world’s least complicated characters, especially for a movie inhabited by a rock star, an identity crisis, a resentful wife, a single mom and a guy with a boat who doesn’t even live by water. 10 Years is a movie about grown-ups for people still in high school.