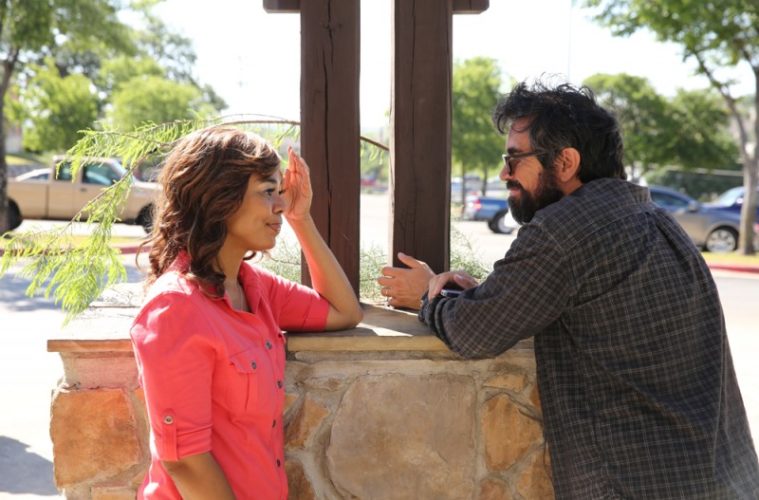 Andrew Bujalski’s Support the Girls follows a day in the life of Lisa (Regina Hall), manager of Double Whammies, a Hooters-like sports bar. Lisa acts as manager/mother superior to her all-female wait staff. The story understands the none of the women are exactly upwardly mobile, and the chance of a better life comes with the risky gamble of negotiating their sexuality and dignity for a paycheck.

Bujalski and Hall teamed to bring the working-class restaurant Double Whammies to the screen. Hall overcame her own judgment of “breasturants” to find the supportive communities among employees behind the scenes. She told Build, “They’re mothers. They’re just trying to work. And when you get to know them … [they] have dreams, and aspirations,” she said. “And unless we can provide other opportunities that help people survive, then I say thank you to anyone who serves us anywhere.”

In our interview with Hall, the actress talks about going from the sets of Girls Trip to Support the Girls (before the former was a box office hit), the spirituality of breasturant management, and the dignity of working class people.

How did you get involved with the movie?

Regina Hall: I read the script and met with Andrew and thankfully he was like, “Let’s make it together.” About seven months later we started shooting. We met while I was shooting Girls Trip. He came to New Orleans. He said he wandered into a Twin Peaks restaurant once and he didn’t know why. He looked at it and what was going on. He was quite curious and from there he started to go to different locations. He felt like there was a story there and kind of discovered what it was.

Did he write the part to be played a black actress?

I did hear him say in an interview that he wanted it to be played by a black actress. I don’t know if that came after he wrote it or what that thought process was. When you read the script it was not written that way. Sometimes a script has character descriptions but his didn’t have African-American in there. It just said Lisa–it didn’t have a racial description. He didn’t write the script using any racial stereotypes. Her race comes up once or twice but it really wasn’t part of the story.

What was it like to go from Girls Trip to Support the Girls? What’s the big differences between a Hollywood and indie set?

The biggest difference is budget. The amount of days on set is different which affects the amount of takes which effects the number of set up in a day, which also effects craft services. [Laughs.] How the crew moves is different and I think you kind of know that as an actor. It’s also the way Andrew shoots, it has an indie feel to it. They’re both great, they’re different. You know, I think the two kind of sets have goals that are so different. I really have such an appreciation for both. It was great to be able to go from Girls Trip to my next job being Support the Girls.

Did you get a feel for the filmmaking world in Austin?

Yeah! We premiered at South by Southwest—that was also really fun. I had never been to Austin before. I must say I really did love it. I had so much fun there, it’s a very warm and inviting place.

Your character Lisa is almost like the mother superior of Double Whammies.

I love the idea of using a nun with Double Whammies! [Laughs.] That’s great, the mother superior.

I bring it up because in your Seth Meyers interview you talked almost becoming a nun. What do you think of Lisa keeping the girl’s lives in line so they don’t get taken advantage of?

I mean, she definitely demands integrity from her customers for her girls. I think she sees the necessity, especially in that environment. Having clear lines and boundaries and not allowing those boundaries to be crossed and feeling like that’s her responsibility. The place functions well with her understanding the girl’s emotions and allowing them to know they’re valued and creating a familial setting.

I don’t know much about Catholic theology, but I know there’s an emphasis on people’s value and one’s inherent worth as a human being. When I saw your interview I felt like maybe your spirituality drew you to this role.

I definitely agree. Lisa has such an inherent goodness, inherent care for humanity. I just thought it was beautiful. I thought there was nothing twisted or sordid in her. I read it and was waiting for that to happen. So many times you see that but it never happened in Andrew’s script. That wasn’t part of Lisa, that wasn’t a part of her character. It was great. it was actually surprising.

Were the waitresses you meet feel judged and shamed for working in a place like Double Whammies?

In doing research I found that I had some shame about it. I don’t think that you realize it, but I’m sure I had some. When I visited these restaurants, I was very surprised at how easy-going it was. I got why people go there regularly. It felt a lot different from what I thought, “Oh my goodness that would be hard to do!” But I didn’t feel like that at all. Once I was in Austin I went to Twin Peaks every day. I didn’t even notice their breasts. That what was so great, to meet them as people. That’s what I like about the backdrop of the movie.

How do you think we can support people who are in service jobs but also have a desire to do something different?

What I found is that many of them have that desire anyway. How do we have a world that expands opportunities in places where people don’t see them? I found that a lot of the girls who work there, they really do. I never felt in speaking to the waitresses they felt this was their final destination. They would say it was great money to get a portfolio or take an acting class or go to modeling school. I think as people have more information and access, people can transition. I worked as a waitress before and I enjoyed it. I made good money and then I got to take my classes and have my days free to go to auditions, but then I could work at night when I was cocktail waitressing. I think when people see bigger than the place they’re in, their ability to dream is bigger and their ability to achieve grows.

One thing you’ve talked about in a few interviews is the inherent goodness of just getting up and doing the work even if it’s not fun or not where you want to be. Will you talk about your philosophy of work?

I think there’s a lot of integrity in people that we forget. People get up everyday and make an honest living and they serve us and they earn their money. That can’t be neglected. I don’t think it can be judged because even at a place like Hooters people have to feel valued and valuable. It’s apart of being alive, of humans, having worth and self-worth. When I worked those jobs I really felt that, felt that from the people who went there, the regulars. What we brought to people who came along. They might be lonely and came for the company and the food. Families came to have a great time. I think there’s something beautiful—that’s what most of us are doing day to day. There may be jobs that look more glamorous on the outside but the truth is that’s what we’re all doing day to day.

Support the Girls is now in limited release and on VOD.