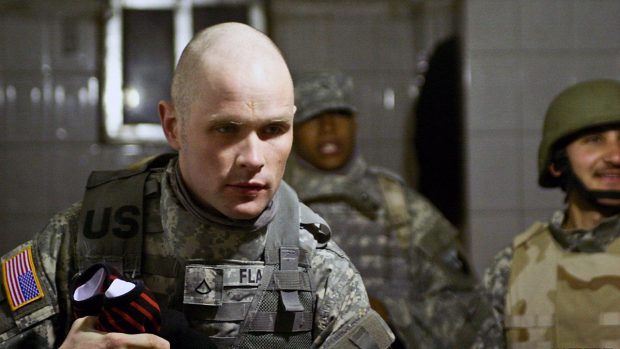 “Who captures life? Who takes what’s left? Who stay? On that next, already know my ‘gillicutti, like I told you. Don’t touch me. Whats up with it? I stay ‘noided. Stimulation overload account for it – desensitized by the mass amounts of shit. I’ve seen it; I’ve been it. Can’t delete it; feels like jail (‘noided). Full moon in da klink, shinin’ don’t sleep; surveillance post my bail. I’ve seen footage. I stay ‘noided. I’ve seen footage.”

The question of “who authored this movie?” has rarely, if ever, come up in our essays about Brian De Palma, and any response to it is less an answer than communicating received wisdom — intelligently and passionately, but as received wisdom all the same. Let’s state this upfront: Redacted is a Brian De Palma movie in more than onscreen credit. We can realize this simply by looking at its litany of first-person, video camera-captured images, a clear correlation to his love of gliding POV shots. We can weigh its anti-war message in relation to at least two other films. We can consider its central incident, in which U.S. soldiers rape a 15-year-old Iraqi girl before killing her and her family, in light of Hi, Mom!’s infamous “Be Black, Baby” sequence. These things are present, they should be noted, and the film invites these contemplations.

In the final days of however many thousands of words that have written about his oeuvre, this might make Redacted’s status as a De Palma text somewhat boring. But I propose that Redacted is rather a different approach — not solely because of its obvious, more-or-less-complete commitment to the found-footage conceit, but in how it requires scrutiny of editorial assembly and directorial omniscience to be appreciated.

Redacted’s initial presentation is quite simple: Angel Salazar (Izzy Diaz), a young American soldier serving in Iraq, has taken it upon himself to record what he sees and experiences, in turn compiling a document that will be sufficient for making his way into film school. (This feels like a bit of [here comes that term!] self-reflexive play on De Palma’s part, not too dissimilar from Keith Gordon’s science whiz in Dressed to Kill, but that ultimately comes down to the camera-wielding as much as anything else.) “Simple” in large part because De Palma is dispensing jokes and allusions left and right, from SPC Lawyer McCoy’s (Rob Devaney) directly addressed warnings not to “expect a Hollywood flick” and that “the first casualty is going to be the truth.” (Lord, what might we think of?) The conceit plays as a little silly, not least of all because the performers vacillate somewhere between on-the-fly naturalism, a very real acting-for-the-camera line of behavior, and a quality that might be deemed little other than bad acting.

And then just about everything changes with one transition, the awkwardness of which is underlined by an absurd level of grace in what we’re now seeing: a French documentary about American soldiers stationed at Iraqi checkpoints, here captured in a golden light — perhaps one manipulated in a post-production we’ll never see and still feel every inch of. This framework and its deeply felt self-consciousness — “authentic” French voiceover and English-language subtitles (whether the slight typos and translation inconsistencies are an intended effect, I can’t say) are one thing; the Barry Lyndon theme and recollections of that movie’s slow push-ins — suddenly elevate Redacted to the level of satire, a place it won’t stay too long. The experiences, no matter the form of documentation, are too horrid, and De Palma feels for these misguided soldiers too much, for humor to become a primary mode of thought.

Redacted can hardly settle in one place, though it uses a plurality of visual forms — surveillance-camera footage; desktop observations of jihadist sites, YouTube (or YouTube-like) posts, and tribute pages by soldiers’ loved ones back home — for the same point: war is bad, the Iraq War is especially heinous, and it can only be expected that bad things will happen when overworked, paranoid soldiers are left to their own devices. This message’s simplicity is at odds with the complicity of its vector, Angel, never more so than in the central rape sequence that created a firestorm of controversy in 2007. We’re only made witness to this act because the aspiring film student observes it as a means of making his war document a more complete, stirring experience — or so he, the film’s controlling force, says. We certainly can’t claim to know him well enough to get his full perspective on the event; all that’s left is a fallout of grief, self-hatred, and a desire (if not total strength) to make right what’s been wrong.

And this doesn’t last long. Angel’s soon kidnapped and executed by jihadists — an act we see most crucial steps of through various sources, since so few things in this realm can go undocumented — and, from here, Redacted could be said to splinter in its perspectives, but in this way it really begins cohering. Once the tying force that was his camera is no longer a part of its fabric, the movie jumps to any available source: more surveillance cameras, more desktops, television news reports, and an iMac chat between McCoy and his father that even allows De Palma to sneak in a split-screen.

This procession initially seems less about logic than plot, but the question of where this is all coming from and why we’re seeing it now jumps to the forefront. Initially hermetic in its first-person worldview, Redacted becomes De Palma’s embrace of particulars of remix culture and consideration of the Internet as either a uniting or dividing force (or both) in our understanding of global events. I defer to this quote, provided in an interview conducted at the time of the film’s release: “All these ideas came from the Internet. They all exist on the Internet. So I said, ‘Well, this… they’re trying to tell us the story!’ So if I can tell it through their particular formats, that is what it is.”

The flow of narrative information and pacing is rather remarkable in how it conjures both the speed of processing information online (desktop screens are done with once a video’s ended) and the sensation that we’re privy to something forbidden. That this would arise most when peering from the perspective of jihadist websites — just as the derision we’re left to feel safe (if not entirely right) in expressing is best elicited by an overdetermined French documentary — attests to how hermetic our perspective on international combat remains, no matter the level of access permitted by devices in our pockets.

We leave Iraq by film’s end, by which point De Palma takes full agency in voicing the cameraman who causes McCoy to break down by prodding — innocuously as his character, all-too-knowingly as omnisicent director — with “How ‘bout a war story?!” Redacted’s final note, a brief photo montage entitled “Collateral Damage,” pivots directly on the line between compassionate and punishing. As clear as it is that De Palma has been sickened by the litany of maimed and killed Iraqi civilians, many of whom are children, he’s presenting, the longest-lasting effect is common ground with the traumatized McCoy — longer-lasting than perhaps anything in his filmography, which I’m inclined to say when, four years after a first viewing, I came to realize that many of these images hadn’t fully left my mind. Can we consider this sequence real life, merely the movies, or somewhere in between? I can’t answer the question. The most I can say is that few films of Redacted’s kind more seriously compel me to ask.