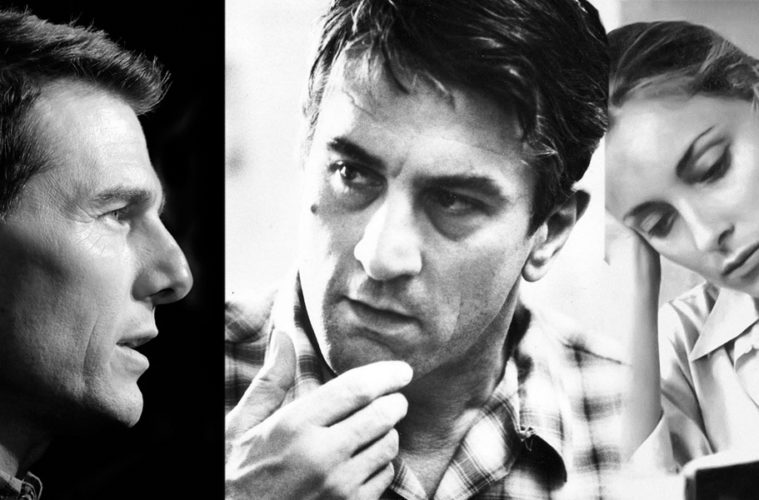 Beach-reading for cinephiles alert: New film-centric books look at the careers and works of an eclectic group of individuals, including Tom Cruise, Robert De Niro, David Lynch, and the late Sharon Tate, among others. In a new round-up of must-reads, let’s take a closer look at these, and a few others.

With a Blu-ray release of the complete series and deleted scenes from the originally maligned, now-championed Fire Walk With Me, Twin Peaks fever has once again gripped the media. It is an ideal time, then, for Brad Dukes’ stunningly comprehensive Reflections: An Oral History of Twin Peaks. The gang is (almost) all here, with Kyle MacLachlan, Sherilyn Fenn, Mark Frost, and Ray Wise all speaking up There’s no Lynch, but there are so many treasures here that it’s hard to be disappointed. Reflections is a 300-page-plus overview of the entire series, featuring entertaining and insightful new interviews. That makes for one of the most notable film (well, okay, TV and film) books of 2014.

“The most beautiful woman I ever met.” So said photographer Bert Stern of actress, style icon, and murder victim Sharon Tate. Paging through Sharon Tate: Recollection — a lush, gorgeously composed visual appreciation by her sister, Debra Tate — it is almost impossible to disagree. Breathtaking images abound, none more so than a shot of pregnant Tate in 1969, wearing a black headband. Her husband, Roman Polanski, refers to the picture in his forward to the book: “There is sadness and joy in those memories [of Sharon] but there is also a great depth. To me that depth can best be understood by the photograph on page 263. It captures the Sharon I knew and will always know.”

Indeed, that particular image is a stunner — and there are stunners throughout. But what makes Recollection such a truly special book is that it restores Tate to her rightful place as the vibrant style icon of her era, divorcing her from the too-often-used classification of “Manson victim.” Yes, she was a tragic victim of the California cult, but she was so, so much more. Debra Tate has rescued her sister from being known by many as no more than a casualty, and that is a fitting tribute.

Cahiers du Cinéma‘s Anatomy of an Actor series has already given us wonderful books about screen icons like Meryl Streep and Al Pacino. The latest two, studies of Robert De Niro and Tom Cruise, are no less enlightening. The great critic Glenn Kenny analyzes 10 of De Niro’s most interesting roles, and while he hits on the biggies — Johnny Boy, Vito Corleone, Travis Bickle, Jake LaMotta, Rupert Pupkin — he also includes Midnight Run’s Jack Walsh and, most pleasingly, Jack Mabry, De Niro’s character in 2010’s underrated Stone. Kenny sees the latter as one of the actor’s most compelling characters: “Despite its mixed reception critically and the fact that it came and went from theaters practically unnoticed, Stone is a major De Niro performance in what’s possibly a major film.” Such insights make Kenny’s the finest book on De Niro to date.

Anatomy of an Actor: Tom Cruise by Amy Nicholson (Phaidon)

Meanwhile, LA Weekly critic Amy Nicholson’s Anatomy of an Actor: Tom Cruise has already garnered media coverage for its astute analysis of the actor’s strange, often unfairly criticized post-Pat Kingsley career. “Miscalculating this new [TMZ era] fan fixation on ‘real’ lives, Cruise finally decided to open up to the press — way up,” Nicholson writes. Oprah, Brooke Shields, and much mockery followed, but some redemption came with Cruise’s role as Les Grossman in Ben Stiller’s Tropic Thunder. Nicholson smartly sees this performance as one of the keys in Cruise’s career, every bit as compelling as Ron Kovic or the vampire Lestat. But she also devotes significant time to Eyes Wide Shut, finding that even though his work as Dr. Bill Harford is surely “artificial, distant, and unrelatable,” it satisfied the one individual who mattered: Stanley Kubrick. “What feels flat to the audience must have felt correct to the director,” Nicholson writes. She sees a grace to Cruise’s devotion to “his master,” the great Kubrick, and finds it essential to his growth as something beyond the “popcorn king.” Finally, Cruise the actor has been given the respect he deserves.

Henry Waldman’s Scenes Unseen is an important catalogue of cinema history, an in-depth look at the “dozens of potentially great films by master directors … [that] were either never completed or not released.” Some will be familiar to readers, including Erich von Stroheim’s Queen Kelly and the many unfinished films of Orson Welles, including It’s All True, Don Quixote, The Deep, and The Other Side of Midnight. But Waldman’s text also tackles Jacques Tati’s Parade (created “as a videotape for Swedish television,” this story of a circus was never seen in the United States), John Ford’s the-title-says-it-all Vietnam! Vietnam! (1972), and Buster Keaton’s 1962 Canadian film Ten Girls Ago. This is an exhaustively researched book, both fascinating and sad. You’ll want to see these films, and their lack of availability will fill you with sorrow.

The Son by Jo Nesbø (Knopf)

Bonus novel recommendation: The Son is not a book about filmmaking, but a worthy entry here all the same. Channing Tatum is set to star (and possibly direct) this adaptation of Jo Nesbø’s gripping prison drama, and it is an almost surefire hit. Nesbo, the author of Headhunters and the Harry Hole series (note that Vintage Books recently released the first two stellar books in that lineup, The Bat and Cockroaches), has crafted a startling, wildly entertaining read, and Tatum was wise to jump on it. The role of longtime Oslo inmate Sonny Lofthus would easily be his most complex to date, and the film could cement Nesbo’s status as one of the world’s most crackling authors. Read the thing before everyone is talking about it.

Which of the above books will you pick up?