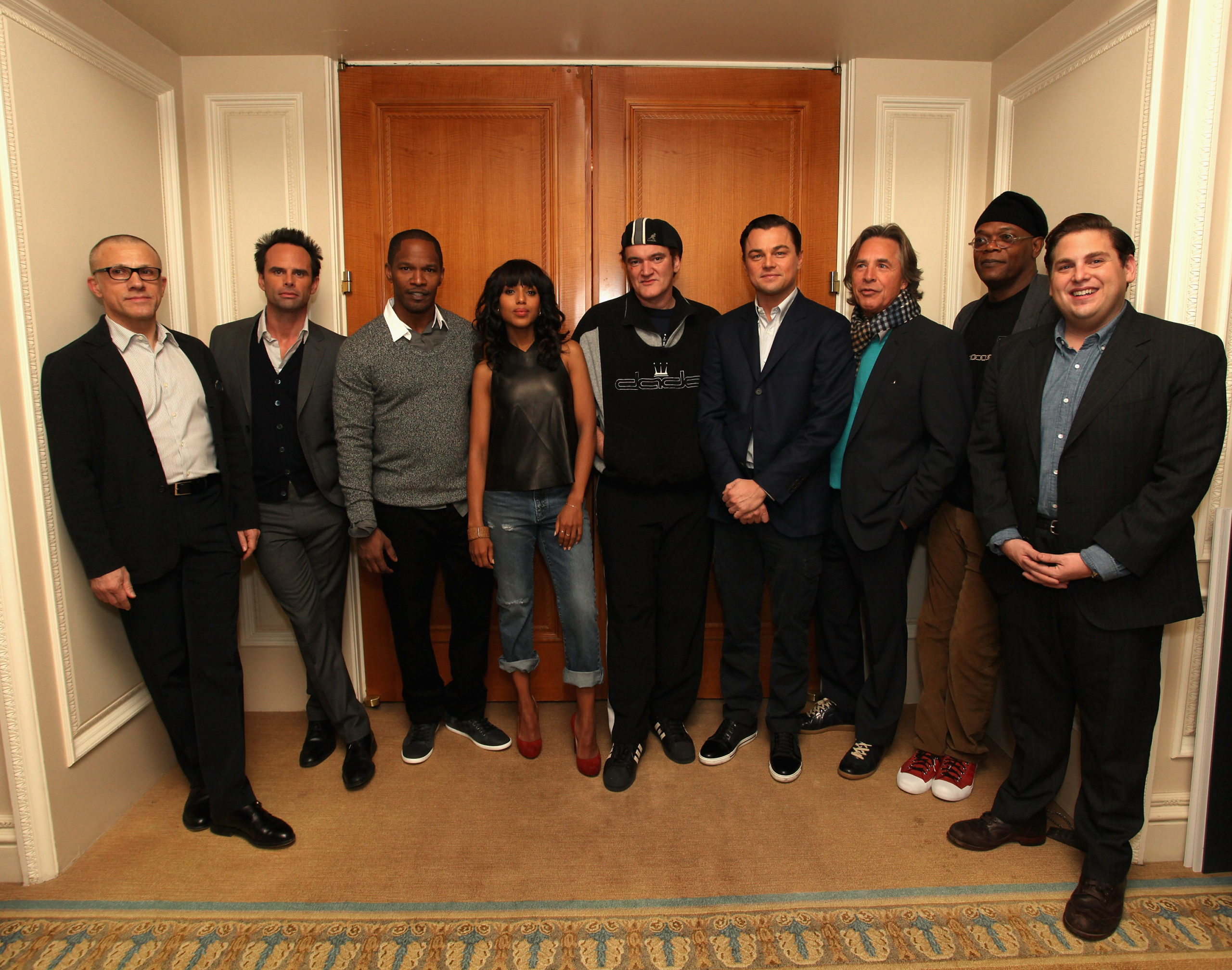 On Sunday, December 16th, Quentin Tarantino and cast converged on New York City’s high-class Ritz-Carlton to discuss their film, Django Unchained. In short, there was a legendary auteur, big stars, and feeble press all on hand, though this didn’t lead to nearly as much blood as the work itself. Nevertheless, those who’ve seen the movie are, by now, fully aware of the chemistry and energy this team carry when all put together — thankfully, that transplants to what could’ve just been another stiff press event.

It’s only fitting that the writer-director — wearing a baggy sweatshirt and Kangol hat which recalled Ordell Robbie — would be the point upon which this entire discussion pivoted. While Tarantino was, unsurprisingly, a joy to listen to (verbal eccentricities and all), there was heavy educational value in hearing him speak firsthand. As a man fully willing to spill new details on his spaghetti western homage, we were told that, like Inglourious Basterds, Django Unchained was a real attempt to tell a historical story that still wasn’t “a straight historical movie with a capital ‘H.’”

Afforded this sense of flexibility, Django Unchained, then, is a chance for Tarantino to rectify one of the genre’s biggest mistakes — “[bending] over backwards to avoid it, as is America’s way.” The way he sees it is this: if most other nations are both forced and willing to look at an ugly past, there’s no reason the United States shouldn’t be doing as much for themselves. Narratively does the country’s history give authors a wellspring to work from — “a zillion stories,” all American, all worth the time. Tarantino is just “one of the first ones out the gate with it.”

Not that it was so easy. Although we’re talking about a filmmaker who earned his bones through stiff and uncompromising glances at violence, Django Unchained presented what, to my ears, sounds like his first real struggle with cinematic depiction. After completing the script — or, really, its first draft — there was one scene that he had some particular debate over: directing a slave market. Written down, it’s one thing. When filmed, it requires him to cast 100 black actors, adorn them with chains, and make them walk through the mud — a requirement that was so much as to make him ask if he could “be the reason that that’s even happened.” Just in speaking about it after-the-fact did Tarantino sound troubled by the idea. So in came none other than Sidney Poitier. We didn’t hear the extent of (or full story behind) their relationship — I suspect it’s directly connected to his daughter, Sydney Tamiia, being a co-star in Death Proof — except that the legend told Tarantino, rather bluntly, that he “had to man-up” and “not be afraid of” the movie itself. The way he saw it, slavery is something everybody had some form of knowledge about — but the existing awareness needed to go further. Rather bluntly did he say that, “for whatever reason,” Quentin Tarantino was “born to tell this story.”

This story, too, is a bit of a change for him as a screenwriter. Upon hearing “Quentin Tarantino,” many will think of a non-linear tale, perhaps even one broken into chapters; with Django Unchained, he claims to have made “a conscious decision, right from page one, not to do my normal narrative tricks.” This is a tale that calls for an odyssey, and that meant proceedings couldn’t play out like his prior, episodic one-person revenge epic. Despite Harvey Weinstein having raised the possibility of splitting a four-hour film into two, Tarantino was adamant that audiences, deprived of ultimate satisfaction, would have “a right to get up in arms at the end of the first movie.”

No matter how well Django Unchained came out, what’s playing in theaters may not be Tarantino’s final statement on the matter. Only a couple of weeks before his film premiered was there word of a 192-minute cut — the current iteration runs at a still-lengthy 165 — and, while he didn’t sound at all fazed by the question of a longer cut, we have a creator who’s “all-in” on what’s released. If he puts new things in, the story will be changed, and he wants this incarnation “to be the story for a while.” After all, this is someone who admits that, if forced to do this process over again, he might have released Django’s screenplay as a novel which was subsequently adapted; “maybe next time,” was the possibility on that front.

When it came to mining influences, Tarantino had in mind a “style of viscera” that stems from album covers and posters — all presenting things Tarantino was “trying to get at” — but which has been supplanted by designs that tend to recall “a Vanity Fair photoshoot.” (He’s of the mind that “every goddamn poster” has this feeling nowadays.) Christoph Waltz thinks an outside source is, actually, contradictory to his process, because the real source is Django Unchained’s screenplay; on the other hand is Don Johnson, a fan of this period’s rich history. He looked toward works like the non-fiction account Blood and Thunder since, for someone in the role of a plantation owner, that affords a much greater context to what’s being played. Although he was the central reason this event could even happen, it wasn’t just all Quentin Tarantino — and how could it ever be when you’ve got this sort of talent onstage? To his left were Christoph Waltz, Leonardo DiCaprio, Samuel L. Jackson, and Walton Goggins; on his right, we had Jamie Foxx, Kerry Washington, Don “Crockett” Johnson, and Jonah Hill. I could’ve listened to the helmer talk for days on end, but things need some shaking up with these other people rounded up.

Jamie Foxx, Django himself, spoke of the visceral reaction afforded by Tarantino’s screenplay. It didn’t stem from an abundant presence of the n-word — there was the discussion of how, growing up in Texas, he had become used to that sort of thing — but, rather, the rare (sometimes, outright new) opportunity to play a slave who’s more than a whipping object. In addition to the obvious, cathartic sense revenge enacted upon oppressors, there was great appeal in Django’s love story.

His onscreen wife, Kerry Washington, was quick to support that notion, noting the pleasure that came in seeing a slave tale which wasn’t filled with “powerlessness.” Django is, again, “an agent of his own power, a liberator, a hero,” and it’s Django, to her, that acts as the rare example of a black superhero.

On the other side of that racial coin is Jackson, who’s now playing what may be the most vile character in his long line of disreputable sorts: Stephen, head house slave for DiCaprio’s plantation owner. He and Tarantino have been friends for more than two decades, now, and when it became clear that the part was 15 years past his own age, things started to click in an entirely different way. There were, afterward, a few laughs shared between the two when he asked, “So you want me to be the most despicable negro in cinematic history?” To no one’s surprise, the feeling was mutually enthusiastic. Not only was there the chance to enliven what both felt was a terrific role, but also a golden opportunity “to do really nasty shit to the person that got the role.”

Another big reunion for Tarantino came in the form of Christoph Waltz — except, not if you talk to Christoph Waltz. Asked if there was some kind of pressure in coming off the now-iconic role of Hans Landa in Inglourious Basterds, he almost scoffed. This character, Dr. King Schultz, required “no reunification, no working again”; this was, in an exact quote, “just another mushroom of the fungus that was growing subcutaneously in me all the time.” Another day at work, in that case. While that’s a natural extension, DiCaprio had a more unique opportunity when it came to the role of Calvin Candie. As audiences have never seen him in this kind of spot, the actor jumped to play what, if you ask him, is “one of the most narcissistic, self-indulgent, racist, horrible characters I’ve ever read in my entire life” — a description that made him “too good not to do.” But because he claimed to have “absolutely nothing [that] I could identify with,” this job didn’t provide the same level of comfort as some prior work.

Foxx told a rather interesting story about DiCaprio’s trouble: when required to spout off the n-word line after line — there was no need to specify which scene they were filming — he started to clam up in discomfort. Noticing this, Jackson pulled him off to the side before another take, telling him something to the effect of, “Hey, motherfucker, this is just another Tuesday for us. Let’s go.” (Foxx also chimed in around this time, telling him that others would “resent the hell out of you” if it wasn’t played full-tilt.) After all that, he was able to slip into Calvin Candie much more comfortably.

This was the main heart of Django Unchained’s press conference — Goggins was fairly quiet, while Hill’s main contribution was “I don’t even know what the fuck I’m doing up here with these guys” — but it doesn’t mean nearly as much if you’ve yet to see the film for yourself. It’s out, it’s great, and it’s ready to be consumed. Go.

Django Unchained is now in theaters. Listen to our discussion of the film here.