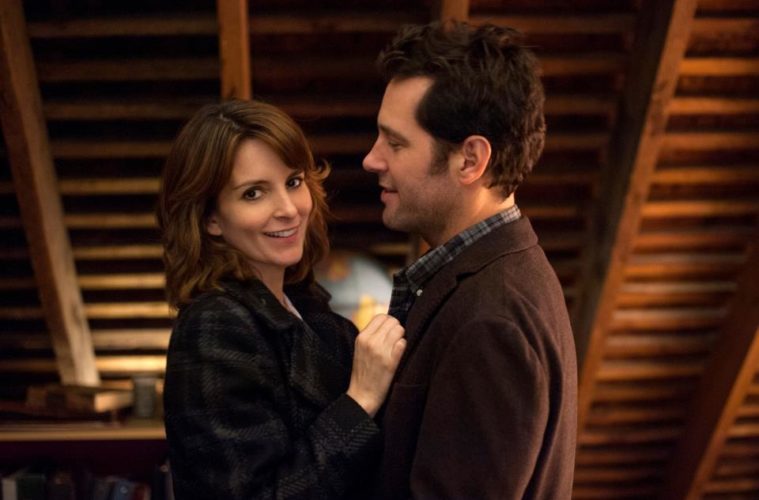 The director and cast of Admission were on hand on an ominously cloudy Friday morning at the Waldorf Astoria. The air was abuzz with talk of a major impending snowstorm with mention of up to 2 feet of snow in the city. Tensions were high and people were afraid getting home was going to be impossible. Luckily, this meant that these set of roundtable interviews was going to be swift as to get people out of here as quickly as possible. We quickly get stuffed in our assigned rooms and wait patiently for Tina Fey, Paul Rudd and director Paul Weitz to enter the room.

Fey and Rudd are the first to arrive and right away the 30 Rock star tells us that she first met the author of the book “Admission,” Jean Korelitz, at a New Years Eve Party and was tipped off that she was going to be getting a call to play the lead in the movie adaptation. Fey then apparently exclaimed “Happy New Year!” for getting the job during the party. As for Rudd he said it was the sheer likability of Fey that drew him in and his official involvement “happened fairly quickly.” Director Paul Weitz elaborated and remembers Rudd being initially excited, but reluctant after reading the script because he thought, “the character was soft and a bit of a cliché.” So they subsequently reworked his character together. When they first got the job, Rudd and Fey both called their mutual friend Amy Poehler to ask how the other was going to be to work with. She was afraid Rudd was going to be “cool comedy guy” and asked Poehler, “Is Paul going to be nice to me?” The two, as expected, were self-effacing, so it’s difficult to tell how much truth came from this quip, but one thing is for sure: the comedy community is a tight one.

Weitz was surprisingly candid and forthright about his choices while making the movie. He expressed how he initially liked the idea of making “Admission” into a film because of its simplicity and said, “When I took an X-ray of [the book] I felt like I could make a movie in that I think it has to boil down into a two sentence thing.”

The director also dove into his complicated relationship with adaptations. On the one hand he expressed guilt about doing them because “it’s almost impossible to do justice to a novel.” Weitz added, “I very much care whether the author is upset or not.” But on the other, “It’s a nice cheat. It gets you the first ‘what-the-hell am I going to tell a story about.’” It first sounded like someone forgot to pack their subterfuge but upon further thought, it’s rather refreshing that a filmmaker has so little pretention about his work — that he’s unafraid of being accused of not doing something original because the truth is that turning something that is already written and transforming it into a compelling movie is not exactly a walk in the park. There are still so many decisions a filmmaker has to make and problems he has to solve. Weitz will have a change to prove himself again, as he’s currently working on another adaptation, Ann Patchett’s “Bel Canto.” He’s unsure how to make it into a good film, but he’s up for the challenge.