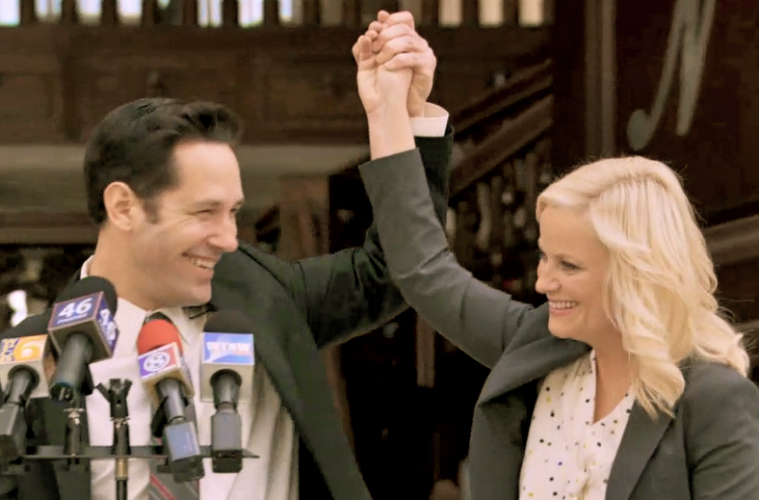 While they got their start in Wet Hot American Summer, comedy stars Paul Rudd has recently been seen with Amy Poehler in his short stint on Parks & Recreation, with a fourth season concluding this week. Now the duo are set to continue their hijinks in a new feature film from Role Models director David Wain.

Variety reports that the trio will make a spoof of the tired out romantic comedy genre with They Came Together. The film see Wain returning to the low-budget method, this time with Lionsgate. Michael Showalter and Wain actually created this script over a decade ago, but it’s now getting a new life. Check out a synopsis below.

When Joel (Rudd) and Molly (Poehler) meet, it’s hate at first sight; his big corporation is the one that threatens to shut down her quirky knick-knack store. Story, which follows their predictably on-again/off-again relationship, features rom-com staples such as the jealous ex-girlfriend, the office jerk, scary in-laws, a boring dentist, a wise dog and beautiful shots of New York City in autumn.

With so many romantic comedies attempting a serious look at these cliches, I can think of few better writer/directors to deconstruct the genre. I was impressed with Wain’s Wanderlust, even though it came and went this year with little response. But like his other projects, I can certainly see it being a cult hit. With this project, Rudd and Poehler’s happy-go-lucky demeanor should do wonders in creating something truly hilarious.

Production is set to kick off in July.