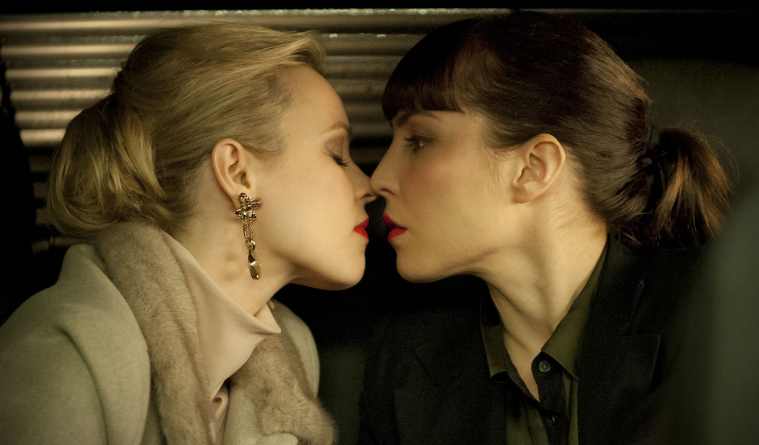 After decades of serving as a provocateur and ostentatious cinematic stylist, one could forgive Brian De Palma for deciding to settle down and just make some movies. Not films, not experiments, not stylistic exercises — just movies. Every great artist is entitled to a fallow period, and who could blame De Palma for indulging in that after everything he’s contributed to cinema’s landscape? As it turns out, we may never have to learn; by all evidence, he will never, ever allow himself this fallow period.

The most eminent proof of that fact comes in the form of De Palma’s 2012 psychodrama Passion. At a glance, the film appears as though it will be a simple story, a basic rundown of familiar thriller tropes with a dash of lesbian erotica thrown in for kicks. A throwback to a time when all you needed to have a hit movie was a promise of nudity and a passable mystery. It even stars two “it” girls of the time, Rachel McAdams and Noomi Rapace, making it feel even more safe and appealing.

For a while, it even plays that way. The opening act of Passion is your standard office-intrigue story, our two leads handling their parts with just a touch of melodrama and arch performance. As partners at an advertising agency, they’re stuck trying to come up with a campaign to sell a new cell phone. The job is slowly defeating them when Isabelle (Rapace) comes up with an amazing idea that she creates with her loyal assistant. The idea is a hit, and everything seems to be going swell until Christine (McAdams) takes credit. Thus, the stage is set for… nothing you could ever reasonably expect.

Here is where De Palma, formerly so sedate and conventional, throws off his cape to reveal the cinematic mad genius underneath. The first act’s rote dramatics melt away, leaving behind a mad dancing skeleton that begs to be witnessed. In line with Isabelle’s deteriorating sense of security and mental stability, the film morphs into an elaborate and expert exhibition of neo-noir and Old Hollywood tropes, both stylistic and thematic. Canted angles, deep shadows, split screens. What began as a tired retread of ’90s-style potboilers becomes what only De Palma can make: a stirring melange of modern edge and classical styling.

This is the power of De Palma and the thing that makes him, for all the world, one of the most interesting American directors. Most of what he does is nothing that hasn’t been done before. He’s using techniques that have permeated the history of cinema from the very beginning. But he employs these tricks with so much skill and nonchalance in execution that their very being within a movie becomes bold. Unlike Tarantino, who trucks in homage that verges on parody (to great effect), De Palma works entirely in earnest creation. He isn’t doing these things to signal his cinematic bona fides, but to more eloquently get across his point. The point, in this case, being that Isabelle has completely broken mentally.

Passion‘s mounting dream logic is almost Lynchian, bizarre things occurring and resolving with seemingly no impact on narrative. The bafflement of the audience rises with the paranoia and franticness of the protagonist. It’s an operatic, arch transposition of mental state onto aesthetic presentation. It is, as previously stated, Lynchian in narrative, but more akin to Irving Rapper in terms of tone and aesthetic, making it at once seemingly more accessible while also forging an even deeper wedge between the film and a more modern audience.

This is the type of magic that only De Palma can make. It can’t be much of a surprise that, at the time of its release, Passion‘s reception was what could charitably be described as “lukewarm at best.” The setup is a barely dressed-up cliché, and the reversal of that somnambulant premise into the madness that follows would turn off anyone who readily signed up for a simple plot willingly and happily. It is a movie bait-and-switch that repels those who might enjoy what it becomes and alienates those who thought they knew what they were getting.

Passion is the perfect argument for continuing to follow a director throughout their career and even into territory in which you might not hope to tread. Fallow periods, lazy stories — for a real artist, such as De Palma, these things don’t exist, and their stultifying impression is the perfect veil behind which to hide a spectacularly entertaining piece of work.