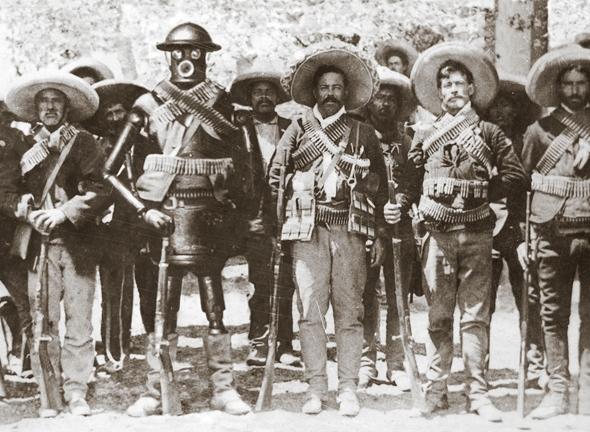 It seems like Boilerplate is finally making some production progress after all this time. We reported almost a year and half ago that J.J. Abrams‘ Bad Robot had, along with Paramount, obtained the rights to Paul Guinan and Anina Bennett‘s graphic novel Boilerplate: History’s Mechanical Marvel. Now, they’ve finally agreed on the screenwriters.

According to Deadline, JD Payne and Patrick McKay have been hired to pen the adaptation. Relatively new to the Hollywood scene, Payne and McKay have begun to forge their screenwriting mark with Goliath, a 300-esque biblical epic set to be directed by Scott Derrickson. They’re also scribing the film adaptation of Deadliest Warrior, based on the Spike TV series, which Shawn Levy is producing for Paramount.

They sum up the story as centering on the titular robot, who “was built in the late 19th Century to replace men in battle.” The source material and eventual film depict him (it?) “in the Spanish-American War and WWI, […] Zelig-like in meetings with the likes of Teddy Roosevelt and Mark Twain.”

The whole concept of the graphic novel sounds pretty awesome, but the future of the project will definitely depend upon McKay and Payne‘s ability to write a good adaptation. If they can battle through scripting something like Goliath, however, I don’t think they’ll have much trouble tackling Boilerplate. It doesn’t hurt that they have J.J. Abrams‘ name attached to the project, either. With no release date in sight, let’s hope it doesn’t take another year and a half for actors and a director to get attached to the project.

What do you think of McKay and Payne scribing Boilerplate?