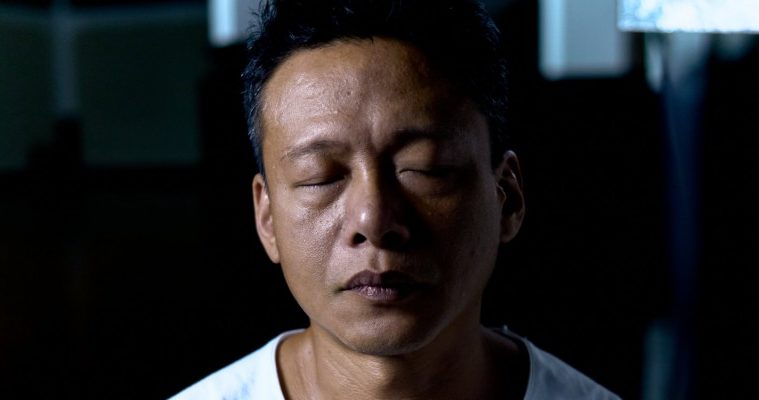 NYFF Review: Tsai Ming-liang’s ‘Your Face’ is a Significant Reminder for Empathy

The prevalence of social media has lent itself to a normalization of portraiture and the gaze, which no longer seems to appreciate the immense detail of the face that had once made the cinema a special medium. Photos on Facebook or Instagram feeds and the ways with which mainstream cultures celebrate beauty have stripped excitement from the specificities of appearance–to be scrolled through quickly and absorbed aimlessly without observation. Wrinkles and quirks, expressions and latent emotions represented are never contemplated, seemingly wasted on peripheral glances. Tsai Ming-liang, in his newest feature, Your Face, conducts a simple experiment in which moving images are primed on the intricacies of the face without distraction. Setting–often easier to connect with in a modern context–is erased almost entirely, as twelve faces are situated in front of a simple black backdrop.

The film serves as a semi-extension on Andy Warhol’s famous “Screen Tests,” which primed its lens on celebrities in an effort to return their gaze to the spectator, and Gregory Markopoulos’ lesser known Galaxie, which presented thirty portraits of artists in the Greenwich Village art scene in the ’60s. Almost half a century later, Tsai replaces the glamor evoked by the icons of Warhol and Markopoulos’ vital works with a rumination on old age and the passage of time. Galaxie‘s eclectic in-camera editing style is replaced with a languid stasis as all other mechanisms of the cinema are put on hold out of reverence for these subjects. Sitting through this film is a dour challenge, but may prove meditative to those disillusioned by the fast pace of modern entertainment, seeking more from the medium than escapism or distraction. A central narrative is mostly obfuscated, though one about the slow creep of death can be inferred.

Instead, the faces belong to complete strangers. They are old and unrecognizable, initially sitting in silence or smiling and laughing at their few minutes in front of the camera. Soon, the subjects begin telling disconnected stories regarding their illustrious pasts, charmingly disrupting the tense accumulation of silence. Oftentimes, through these mundane stories, they are able to find lyricism in their statements. And the resumption of silence is comforting, allowing us to resume focus on the intricacies present on subject’s faces. Such moments of unspoken feeling are immensely effective and radically exciting in their minimalism: when the first subject, after five minutes of keeping it together in front of the camera, cracks a smile, it is hard not to join her. One old man is asleep for a good amount of time before stirring, a deviation of pattern that evokes feelings of wonder not unlike those of the groundbreaking moments from its avant-garde predecessors. Legendary Japanese composer Ryuichi Sakamoto provides a minimalist score that embellishes the calm and meditative feelings of watching the film without overpowering its subjects.

The last face–of immense significance, but hidden in plain sight to those unfamiliar with Tsai’s work–belongs to Lee Kang-sheng, to whom Tsai introduced audiences for the first time in his debut film Rebels of the Neon God as a directionless teenager thirty years prior and with whom he has worked on every feature since. His presence is a profound finale, similar to that of French icon Jean-Pierre Léaud (himself a Tsai collaborator) portraying the dying Sun King in Albert Serra’s The Death of Louis XIV. He rambles on, wearily telling mundane stories from his childhood about his father, his education; though he is one of the younger people featured, his demeanor is weary and languorous. Afterwards, the interview space is shown in its totality, as the lights dim and flicker haphazardly. Make of that what you will.

Your Face screened at the 2018 New York Film Festival.