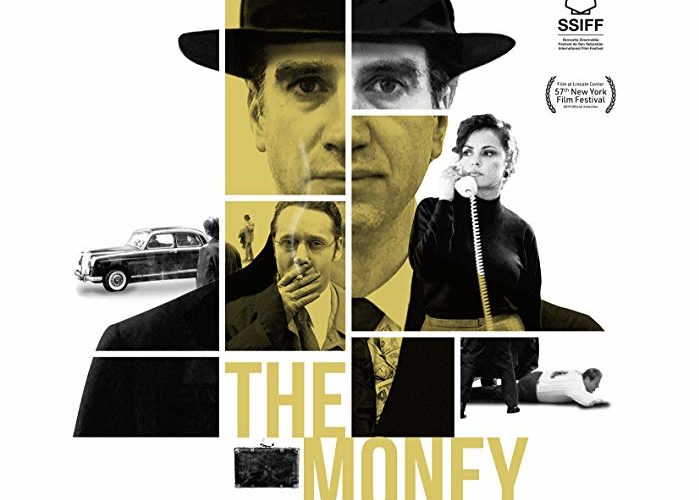 Mr. Schweinsteiger (Luis Machín) ran a good game in Uruguay by helping unsavory folks launder money through him for a percentage. He was smart too, refusing to work with politicians knowing they’d eventually screw something up and drag his name down with them. Unfortunately, however, the man he willingly took under his wing as a logical successor and future son-in-law proved greedier than he was intelligent. Humberto Brause (Daniel Hendler) did what Schweinsteiger wouldn’t because the dollar signs were too attractive to be ignored and ultimately suffered the fate his boss always tried to avoid: prison. While that time away didn’t make him any smarter, Humberto did get luckier. More often than not he probably wished the opposite were true since good luck can still get you killed. Based on the novel by Juan Enrique Gruber, director Federico Veiroj and his co-writers Arauco Hernández Holz and Martín Mauregui open The Moneychanger with a scene of Jesus Christ vehemently upending the tables of moneychangers in Jerusalem. Humberto narrates the action by admitting God’s son was justified. He knows his occupation is populated by the worst of the worst and very little has changed today with payday lenders and banks themselves providing help for no other reason than to turn a profit in exchange. Maybe Humberto realized this at the start or only after the walls around him squeezed tighter with each more dangerous client knocking at his door. Where most criminals are ruled by confidence, however, this opportunist was motivated by that fear.

The result is therefore entertaining not by way of seeing Humberto’s successes, but watching the color drain from his face with every new problem. It might be having to tell his pregnant wife that his mistress gave him an STD or perhaps it’s meeting an associate’s hired murderer (Germán de Silva’s Moacyr) with a handshake. Humberto is practically a walking lump in the throat, cringing and scrambling to excise himself from sticky situations he’d rather not confront at all. Sure the money is good, but what happened to everything else? A loveless marriage, boring kids, high blood pressure, and zero friends leaves him wondering if the path chosen was worth it. Maybe Schweinsteiger was right. Maybe that extra cash was more trouble than it could ever be worth. His agita mostly increases in response to small things of his own making (he cannot say no to a lucrative opportunity and is too blind to realize his negotiating tactics aren’t giving him an upper-hand) until Javier Bonpland (Benjamín Vicuña) shows up. It’s a wonder someone like him hadn’t already during the twenty-odd years Veiroj puts on-screen considering the amounts of money he was smuggling across borders—especially once the countries surrounding Uruguay were falling into bankruptcy and thus putting men like him on notice by powerful clients looking to cash out in a hurry. All Bonpland has to do to scare the crap out of Humberto is play the recorded screams of his missing golden goose. (I only used one idiom in that sentence.)

Hendler deserves a ton of credit because he toes the line that allows his crippling panic to appear authentic while still causing us to laugh out loud. His Humberto eventually puts his head on such a swivel that it wouldn’t have felt out of place to see it pop off and roll along the ground. Fear puts him in bed with bad men when dying by the hand of a worse man is the alternative. And it also causes him to let paranoia and cowardice take control of his body while others in his position calmly face the fate they knew they couldn’t outrun anyway. Humberto simply can’t look that far into the future or is too delusional to think he must. He wasn’t cut out for this. Or maybe he was considering how much he survives via coincidence and happenstance. Without any scruples to speak about, Humberto will do whatever is necessary. He will evolve and change course with the assistance of men recommended to him by trustworthy friends who know the job will get done. That’s the thing, though. All they see is the professional side of things. They see Humberto’s eyes light up at how many briefcases of cash are entering his office and know he’ll come through. Only we recognize that he’s operating by the seat of his pants with no exit strategy or fallback plan. Only we see how he accepts these jobs because he’s too afraid to find out what happens if he doesn’t. We revel in his naked suffering.

It’s a refreshing position to be in as an audience member since these types of films usually star a cool customer eating people and spitting them out. This time our lead is the one being spit and there’s something universally relatable about that. Humberto lucked his way to the top of a volatile food chain he doesn’t have the stomach for and we reap the reward of watching him flounder without a clue as to how much he’s being used by everyone around him—including his wife Gudrun (Dolores Fonzi’s nonplussed reactions are comedic straight man gold). But we never want him to actually fall prey to the violence closing in. The experience of discovering what he’ll do next to live another stress-filled day is too much fun.

The Moneychanger screens at the 57th New York Film Festival.